How can I solve a connection pool problem between ASP.NET and SQL Server?

The last few days we see this error message in our website too much:

"Timeout expired. The timeout period elapsed prior to obtaining a connection from the pool. This may have occurred because all pooled connections were in use and max pool size was reached."

We have not changed anything in our code in a while. I revised the code to check open connections which didn't close, but found everything to be fine.

Do I need to edit something in IIS?

In most cases connection pooling problems are related to connection leaks. Your application probably doesn't close its database connections correctly and consistently. When you leave connections open, they remain blocked until the .NET garbage collector closes them for you by calling their Finalize() method.

You want to make sure that you are really closing the connection. For example the following code will cause a connection leak, if the code between .Open and Close throws an exception:

The correct way would be this:

When your function returns a connection from a class method make sure you cache it locally and call its Close method. You'll leak a connection using this code for example:

The connection returned from the first call to getConnection() is not being closed. Instead of closing your connection, this line creates a new one and tries to close it.

If you use SqlDataReader or a OleDbDataReader, close them. Even though closing the connection itself seems to do the trick, put in the extra effort to close your data reader objects explicitly when you use them.

This article "Why Does a Connection Pool Overflow?" from MSDN/SQL Magazine explains a lot of details and suggests some debugging strategies:

Upon installing .NET Framework v4.6.1 our connections to a remote database immediately started timing out due to this change.

To fix simply add the parameter TransparentNetworkIPResolution in the connection string and set it to false:

Unless your usage went up a lot, it seems unlikely that there is just a backlog of work. IMO, the most likely option is that something is using connections and not releasing them promptly. Are you sure you are using using in all cases? Or (through whatever mechanism) releasing the connections?

Did you check for DataReaders that are not closed and response.redirects before closing the connection or a datareader. Connections stay open when you dont close them before a redirect.

We encounter this problem from time to time on our web site as well. The culprit in our case, is our stats/indexes getting out of date. This causes a previously fast running query to (eventually) become slow and time out.

Try updating statistics and/or rebuilding the indexes on the tables affected by the query and see if that helps.

You can try that too, for solve timeout problem:

If you didn't add httpRuntime to your webconfig, add that in <system.web> tag

Yet another reason happened in my case, because of using async/await, resulting in the same error message:

System.InvalidOperationException: 'Timeout expired. The timeout period elapsed prior to obtaining a connection from the pool. This may have occurred because all pooled connections were in use and max pool size was reached.'

Just a quick overview of what happened (and how I resolved it), hopefully this will help others in the future:

This all happened in an ASP.NET Core 3.1 web project with Dapper and SQL Server, but I do think it is independent of that very kind of project.

First, I have a central function to get me SQL connections:

I'm using this function in dozens of methods like e.g. this one:

As you can see, I'm using the new using statement without the curly braces ({, }), so disposal of the connection is done at the end of the function.

Still, I got the error about no more connections in the pool being available.

I started debugging my application and let it halt upon the exception happening. When it halted, I first did a look at the Call Stack window, but this only showed some location inside System.Data.SqlClient, and was no real help to me:

Next, I took a look at the Tasks window, which was of a much better help: 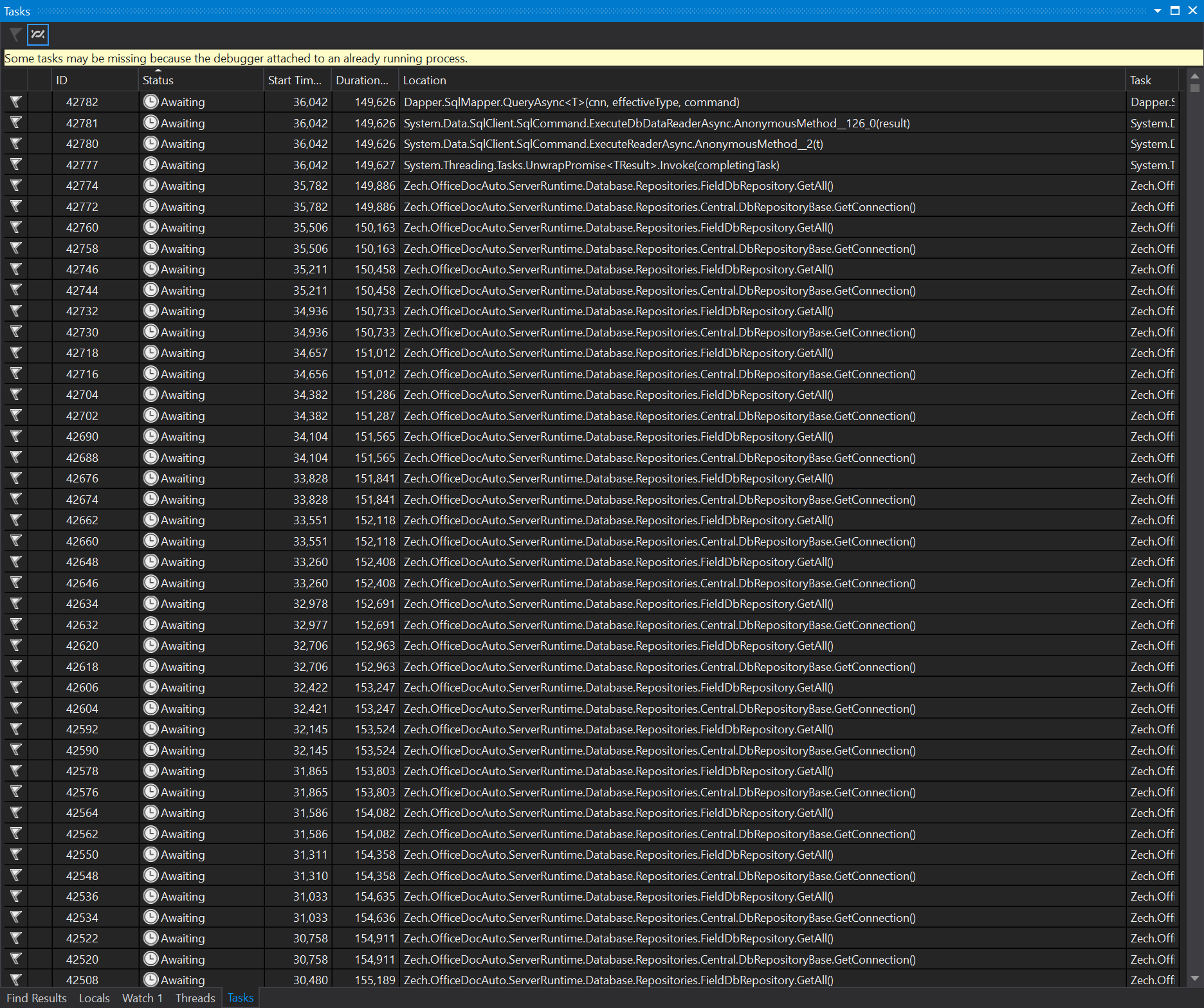 There were literally thousands of calls to my own GetConnection method in an "Awaiting" or "Scheduled" state.

When double-clicking such a line in the Tasks window, it showed me the related location in my code via the Call Stack window.

This helped my to find out the real reason of this behaviour. It was in the below code (just for completeness):

In the above controller action, I first did a call to EmployeeRepository.GetAll() to get a list of models from the database table "Employee".

Then, for each of the returned models (i.e. for each row of the result set), I did again do a database call to EmployeeRepository.GetAllValuesForEmployee(d).

While this is very bad in terms of performance anyway, in an async context it behaves in a way, that it is eating up connection pool connections without releasing them appropriately.

I resolved it by removing the SQL query in the inner loop of the outer SQL query.

This should be done by either completely omitting it, or if required, move it to one/multilpe JOINs in the outer SQL query to get all data from the database in one single SQL query.

Don't do lots of SQL queries in a short amount of time, especially when using async/await.

You can specify minimum and maximum pool size by specifying MinPoolSize=xyz and/or MaxPoolSize=xyz in the connection string. This cause of the problem could be a different thing however.

I have encountered this problem too, when using some 3rd party data layer in one of my .NET applications. The problem was that the layer did not close the connections properly.

We threw out the layer and created one ourselves, which always closes and disposes the connections. Since then we don't get the error anymore.

I just had the same problem and wanted to share what helped me find the source: Add the Application name to your connection string and then monitor the open connections to the SQL Server

In addition to the posted solutions.

In dealing with 1000 pages of legacy code, each calling a common GetRS multiple times, here is another way to fix the issue:

In an existing common DLL, we added the CommandBehavior.CloseConnection option:

Then in each page, as long as you close the data reader, the connection is also automatically closed so connection leaks are prevented.

In my case, I was not closing the DataReader object.

If you are working on complex legacy code where a simple using(..) {..} isn't possible - as I was - you may want to check out the code snippet I posted in this SO question for a way to determine the call stack of the connection creation when a connection is potentially leaked (not closed after a set timeout). This makes it fairly easy to spot the cause of the leaks.

Don't instantiate the sql connection too much times. Open one or two connections and use them for all next sql operations.

Seems that even when Disposeing the connections the exception is thrown.

This problem i had in my code. I will paste some example code i have over came below error. The timeout period elapsed prior to obtaining a connection from the pool. This may have occurred because all pooled connections were in use and max pool size was reached.

You want to close the connection each and every time. Before that i didn't us the close connect due to this i got error. After adding close statement i have over came this error

I was facing the same problem, after hours of research I realized I was connected on Guest network without VPN so setting up VPN did the trick for me

I also got this exact error log on my AWS EC2 instance.

There were no connection leaks since I was just deploying the alpha application (no real users), and I confirmed with Activity Monitor and sp_who that there are in fact no connections to the database.

My issue was AWS related - more specifically, with the Security Groups. See, only certain security groups had access to the RDS server where I hosted the database. I added an ingress rule with authorize-security-group-ingress command to allow access to the correct EC2 instance to the RDS server by using --source-group-name parameter. The ingress rule was added, I could see that on the AWS UI - but I got this error.

When I removed and then added the ingress rule manually on AWS UI - suddenly the exception was no more and the app was working.

This problem I have encountered before. It ended up being an issue with the firewall. I just added a rule to the firewall. I had to open port 1433 so the SQL server can connect to the server.

Yes, There is a way to change configuration. If you are on a dedicated server and simply need more SQL connections, you may update the "max pool size" entries in both connection strings by following these instructions:

Make sure you set up the correct settings for connection pool. This is very important as I have explained in the following article: https://medium.com/@dewanwaqas/configurations-that-significantly-improves-your-app-performance-built-using-sql-server-and-net-ed044e53b60 You will see a drastic improvement in your application's performance if you follow it.

In my case, I had infinite loop (from a get Property trying to get value from database) which kept opening hundreds of Sql connections.

To reproduce the problem try this:

You have leaked connections on your code. You may try to use using to certify that you're closing them.

I wasn't thinking this was my issue at first but in running through this list I discovered that it didn't cover what my issues was.

My issue was that I had a bug in which it tried to write the same record numerous times using entity framework. It shouldn't have been doing this; it was my bug. Take a look at the data you are writing. My thoughts are that SQL was busy writing a record, possibly locking and creating the timeout. After I fixed the area of code that was attempting to write the record multiple in sequential attempts, the error went away.

Not the answer you're looking for? Browse other questions tagged .net asp.net sql-server sql-server-2005 or ask your own question.

0
Timeout expired error in mysql with C# in my asp.net web application?
0
Asp.net Application Pool Size Calculation
723
There is already an open DataReader associated with this Command which must be closed first
17
How to find leaking db connection pool handle?
7
Timeout expired. The timeout period elapsed prior to obtaining a connection from the pool.
17
Can't connect to SQL 2008 database using .NET Core 2.0
12
Dapper.NET Connection/Query Best Practice
4
"Timeout expired" exception on code exclusively using using statements
0
How can I close connection string object in Entity Framework
1
How to reuse code that reopens connection?
See more linked questions

1986
How to return only the Date from a SQL Server DateTime datatype
2023
How to check if a column exists in a SQL Server table?
2169
How to concatenate text from multiple rows into a single text string in SQL Server
1470
How can I do an UPDATE statement with JOIN in SQL Server?
4013
How do I UPDATE from a SELECT in SQL Server?
368
Timeout expired. The timeout period elapsed prior to completion of the operation or the server is not responding. The statement has been terminated
0
How to fix SQL connection leaks in this code?
1536
How can I delete using INNER JOIN with SQL Server?