I would like to understand the key difference between parametric polymorphism such as polymorphism of generic classes/functions in the Java/Scala/C++ languages and "ad-hoc" polymorphism in the Haskell type system. I'm familiar with the first kind of languages, but I have never worked with the Haskell.

Parametric polymorphism (...), allows a single piece of code to be typed “generically,” using variables in place of actual types, and then instantiated with particular types as needed. Parametric definitions are uniform: all of their instances behave the same. (...)

Ad-hoc polymorphism, by contrast, allows a polymorphic value to exhibit different behaviors when “viewed” at different types. The most common example of ad-hoc polymorphism is overloading, which associates a single function symbol with many implementations; the compiler (or the runtime system, depending on whether overloading resolution is static or dynamic) chooses an appropriate implementation for each application of the function, based on the types of the arguments.

So, if you consider successive stages of history, non-generic official Java (a.k.a pre-J2SE 5.0, bef. sept. 2004) had ad-hoc polymorphism - so you could overload a method - but not parametric polymorphism, so you couldn't write a generic method. Afterwards you could do both, of course.

By comparison, since its very beginning in 1990, Haskell was parametrically polymorphic, meaning you could write:

where A and B are type variables can be instantiated to all types, without assumptions.

But there was no preexisting construct giving ad-hoc polymorphism, which intends to let you write functions that apply to several, but not all types. Type classes were implemented as a way of achieving this goal.

They let you describe a class (something akin to a Java interface), giving the type signature of the functions you want implemented for your generic type. Then you can register some (and hopefully, several) instances matching this class. In the meantime, you can write a generic method such as :

where the Ord is the class that defines the function (_ ≤ _). When used, (between "abc" "d" "ghi") is resolved statically to select the right instance for strings (rather than e.g. integers) - exactly at the moment when (Java's) method overloading would.

You can do something similar in Java with bounded wildcards. But the key difference between Haskell and Java on that front is that only Haskell can do dictionary passing automatically: in both languages, given two instances of Ord T, say b0 and b1, you can build a function f that takes those as arguments and produces the instance for the pair type (b0, b1), using, say, the lexicographic order. Say now that you are given (("hello", 2), ((3, "hi"), 5)). In Java you have to remember the instances for string and int, and pass the correct instance (made of four applications of f!) in order to apply between to that object. Haskell can apply compositionality, and figure out how to build the correct instance given just the ground instances and the f constructor (this extends to other constructors, of course) .

Now, as far as type inference goes (and this should probably be a distinct question), for both languages it is incomplete, in the sense that you can always write an un-annotated program for which the compiler won't be able to determine the type.

But those languages mainly differ in the range of program statements to which type inference applies in practice, and in the importance given to the correctness of the type inference results.

Parametric polymorphism means, we don't care about the type, we'll implement the function the same for any type. For example, in Haskell:

We don't care what the type of the elements of the list are, we just care how many there are.

Ad-hoc polymorphism (aka method overloading), however, means that we'll use a different implementation depending on the type of the parameter.

Here's an example in Haskell. Let's say we want to define a function called makeBreakfast.

If the input parameter is Eggs, I want makeBreakfast to return a message on how to make eggs.

If the input parameter is Pancakes, I want makeBreakfast to return a message on how to make pancakes.

According to John Mitchell's Concepts in Programming Languages,

A complete discussion of what parametric polymorphism and ad-hoc polymorphism mean and to what extent they're available in Haskell and in Java is longish; however, your concrete questions can be tackled much more simply:

As far as I know, Java does not do type inference. So the difference is that Haskell does it.

Please, give me an example of the situation where something can be written in Java/Scala but can not be written in Haskell(according to the modular features of these platforms too), and vice-versa. 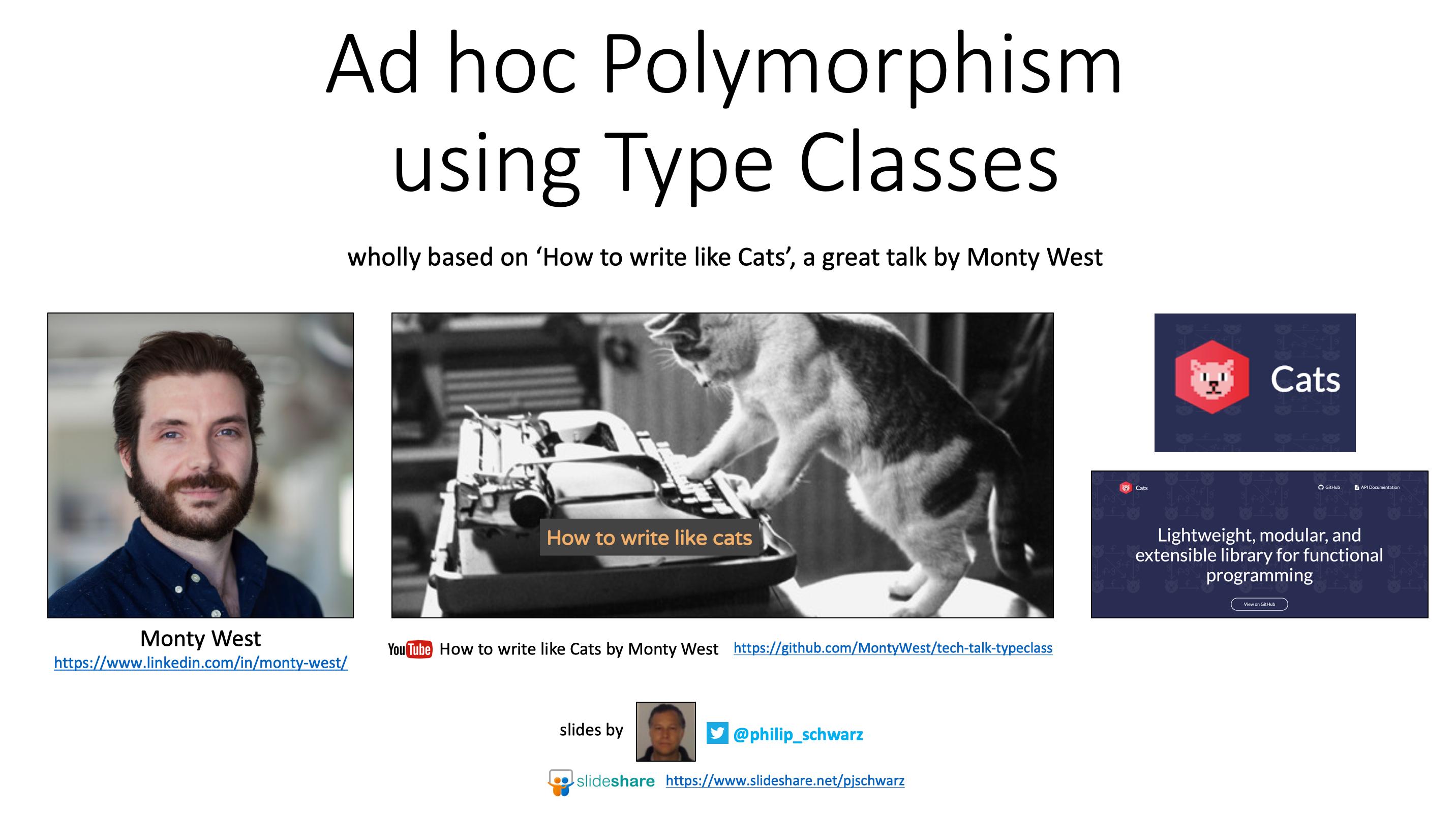 Not the answer you're looking for? Browse other questions tagged java haskell types polymorphism type-inference or ask your own question.

26
What is Haskell's style of polymorphism?
1
Is allowing untagged unions equivalent to allowing type classes?
1
Is polymorphism also present in method overloading?
1
Bounded parametric polymorphism vs ad-hoc polymorphism
2
When programming with 'idiomatic' Scala is the use of 'concrete classes' optional/redundant?