First let's explain the problem more generally. I have a collection of points with x,y coordinates and want to find the optimal unique neighbour pairs such that the distance between the neighbours in all pairs is minimised, but points cannot be used in more than one pair.

Note: points are not ordered and x and y coordinates will both vary between 0 and 1000, but for simplicity in below examples x==y and items are ordered.

First, let's say I have the following matrix of points:

Second, two points cannot have the same partner. If we have the matrix:

Third, if we have the matrix :

Fourth, in the case of an uneven number of points, the furthest point should be made nan, e.g.

Fifth, in the case there are three or more points with exactly the same distance, the pairing can be random, e.g.

Next in case there are duplicates in the list we need to find the nearest distance:

Using these dupdists I would be able to find that one is closer to the pt than the other:

Using the duppriority values we can provide the closer pt its right pairing. But to give the other point its pairing will then depend on its second nearest pairing and the distance of all other points to that same point.. Furthermore, if both points are the same distance to their closest point, I would also need to go one layer deeper:

I am kind of stuck here and also feel it is not very efficient in this way, especially for more complicated conditions than 4 points and where multiple points can be similar distance to one or multiple nearest, second-nearest etc points..

I also found that with scipy there is a similar one-line command that could be used to get the distances and indices:

so am wondering if one would be better to continue with vs the other.

More specific problem that I want to solve

Pts in time are generally closer to themselves than to others. Thus I should be able to link identities of the points over time. There are however a number of complications that need to be overcome:

Any advice to help solve my problem would be much appreciated. I hope my examples and effort above will help. Thanks!

python numpy scipy pairing neighbours
Share
Improve this question
edited May 4 at 8:45
crazjo
asked May 3 at 11:20

This can be formulated as a mixed integer linear programming problem.

In python you can model and solve such problems using cvxpy. 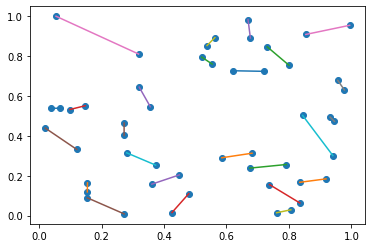 Not the answer you're looking for? Browse other questions tagged python numpy scipy pairing neighbours or ask your own question.

1
Temporal linking of point identities based on minimal distances

0
Output length mismatch in nested loops?
6
Interpolate unstructured X,Y,Z data on best grid based on nearest neighbour distance for each points
1
Python - euclidean distance of all pairs of subsequences of given length from given array
1
Find closest 8-connected chessboard distance between multiple pairs of points: shortest m-path
1
Fast euclidean distances between two sets of points with missing values in Python
3
KDTree with periodic boundary conditions and pair distances in output
1
Closest cluster distance (No centroid)