With a dark color scheme in Xcode 4 the i-beam cursor (aka text selection cursor) is nearly invisible. Is there a way to change the color of this cursor, either for Xcode specifically, or failing that, system-wide?

It'd be nice if it would automatically change to a color contrasting its background too.

As of Xcode 8, Apple has hidden the i-beam cursor somewhere where nobody has found it. Instead, many have chosen to use Mousecape to alter the i-beam in all programs. I prefer that method since it fixes the i-beam in other programs that support dark themes, such as Komodo editor. Mousecape should work in all Xcode versions and updating Xcode won't break the cursor. I'm currently using Mousecape in macOS 10.13.2, Xcode 9.1. Here are the steps:

Xcode does NOT use the system-wide i-beam cursor as everyone I found talking about it stated as if it was a known fact. If I hadn't believed those people, I wouldn't have spent two days figuring out how to alter the system i-beam cursor by editing CoreGraphics only to find that Xcode's ibeam doesn't change. BTW, I also stumbled on how to edit other system cursors.

I spent most of a weekend figuring this out, but the i-beam cursor in Xcode CAN be edited. It's simply a TIFF file in the following location for Xcode 3.2.6 (and earlier, I assume, but have not tested):

The ibeam files have moved again in Xcode 4.4:

Editing DVTIbeamCursor.png was enough to change the i-beam in the main editor on my system. On another site, someone reported that DVTIbeamCursor@2x.png will be used on a retina display or Apple's other new high res displays like Thunderbolt and Cinema. Who knows if TIbeam.tiff is even used anymore since they didn't update it to png.

According to comments below, in Xcode 5.0.2 all 3 cursor files were replaced with one file:

I'm guessing that file is a double resolution (aka retina display) cursor that's scaled down for non-retina screens.

If you can't find the ibeam file in your Xcode, try running this command in Terminal:

In Xcode 7.3, the cursor was moved inside the following bundle file so the search command above won't find it:

I recommend using a process found here to patch a new cursor into the bundle file. If you don't like the cursor it installs (I felt it was still too dark and the grey outlines blend in with grey comment text), follow these steps:

You may also wish to send an angry letter to Apple to complain that they have not fixed this problem in the last 7+ years and have instead made it progressively more difficult for users to patch Apple's broken cursor.

Don't forget to keep backups of your edited cursors. Newer Xcode versions will overwrite your custom cursors with default ones when it does a software update.

Here's the ibeam cursor I use:

I created a public repo for an ibeam cursor that should work on light and dark colored backgrounds, because it is black with a white outline. It includes succinct instructions, and a TIFF file ready to drop in to the Xcode bundle.

Update: the git repo includes a shell script that makes installation quite easy.

Unfortunately this is a difference between Carbon and Cocoa cursors—Cocoa cursors won't invert; at least, up to Snow Leopard. In Lion, even Carbon cursors behave like you don't want.

If you've got a machine running Snow Leopard or earlier, compare the I-beam behavior in BBEdit or TextWrangler (which use Carbon cursors), for example; it'll become entirely white on a black background. Even this is a bit fragile—when I change the screen magnification, BBEdit's formerly-white cursor becomes black.

You can still set a Carbon cursor in your Cocoa app. Try this in a NSTextView subclass:

(In 64-bit you'll see that this function is excluded from the headers, but the symbol is there and works.) If you're sufficiently motivated, you could potentially patch Xcode to do some variant of the above, perhaps from an Xcode plugin.

If you're on Lion, here's what it is supposed to look like: 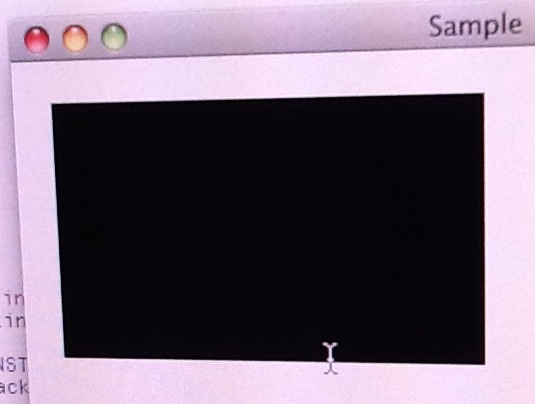 So I'd suggest filing a bug with Apple to make the systemwide I-beam cursor (or NSCursor in general) properly handle dark backgrounds; it's not an Xcode-specific issue and it should really have been fixed years ago.

For Xcode 5 preview, i have created a better I-Beam for Dark color templates. You can use it freely. http://www.scigems.org/wordpress/?p=92

According to this thread on the Apple forums:

the "cursor color" referred to in the XCode 4 fonts and colors preferences is actually the cursor you see when you have clicked in a window to enter text.

The I-beam cursor you see when you are moving the mouse around in the code editing window is a Mac-OS wide feature which you cannot change in XCode.

The forum post above suggests looking for third party software to change attributes of the system-wide I-beam cursor.

Another post points out that you can at least edit the cursor size to make it more visible:

Not the answer you're looking for? Browse other questions tagged xcode macos colors mouse-cursor or ask your own question.

46
Xcode 4 plugin development
4
How can I change the mouse's i-beam cursor in Xcode?

915
Git ignore file for Xcode projects
821
How to move the cursor word by word in the OS X Terminal
1251
Xcode - How to fix 'NSUnknownKeyException', reason: … this class is not key value coding-compliant for the key X" error?
1453
How to "add existing frameworks" in Xcode 4?
553
Where do I find the line number in the Xcode editor?
686
Version vs build in Xcode
980
How to download Xcode DMG or XIP file?
813
xcode-select active developer directory error
782
Xcode process launch failed: Security
894
Xcode error "Could not find Developer Disk Image"