How can I resolve Android Studio 4.2 build errors after removing jcenter()?

I have upgraded Android Studio from 4.1.3 to 4.2, using latest gradle and gradle plugin. Now references to using jcenter() in the build script are deprecated due to jcenter being end-of-lifed: 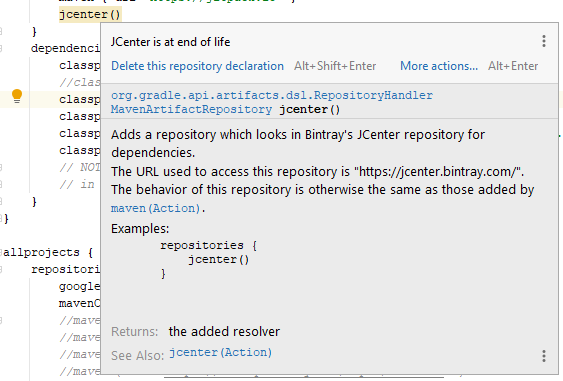 The suggestion is to "migrate" to mavenCentral(). I have various dependencies that are seemingly not on mavenCentral(), because gradle cannot find them, for example: 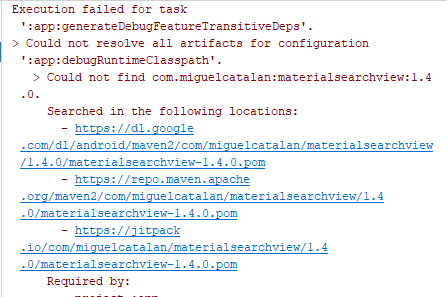 I Googled the artifact ("materialsearchview" in this case) and found it on the search platform "MVNrepository":

So here is what I have tried (all unsuccessful) to put a reference into my build script to have gradle find this artifact:

This generated a slightly different error:

then did another invalidate cache/restart. No joy.

So I guess I have three questions:

Here is a good way to think of it thanks to Mark:

Think of these as "Gradle, look into these repositories to reconcile all the 'implementation' statements."

Then in the module level build.gradle I had this:

Think of this as "Oh yeah, grab all these things too, even if I didn't mention them as specific dependencies".

My mistake #1 was in thinking I could have an .aar file in the libs directory which ALSO had a corresponding 'implementation' statement. You can't.

Any resource referenced in an 'implementation' statement AND ANY RESOURCE THAT IS IN ITS POM THAT IT DEPENDS ON must ALL be in repositories that you define in the repositories block.

If ANY of the dependencies were in jcenter, since I got rid of jcenter then I must:

How does one identify all the dependencies you ask? Well you can do it the slow way (like I did at first) and keep finding/adding them until the build doesn't break anymore. Or you can be more clever about it and let Gradle tell you which it will do if you ask it (see the docs here).

Finally - don't forget that it is not enough to make sure the referenced .aar file is in libs. In other words, Gradle does not work like: "I will look first at the repositories to satisfy your implementation dependencies and any dependency they reference, and if they are not there then I will look through all the .jar and .aar files in the spot you told me to look in the fileTree statement". Instead, note that any dependency that is referenced by an item in an 'implementation' statement needs to ALSO be able to be found within the repositories. If it can't then your only choice is to use that dependency graph, determine ALL the dependencies, and put all the .aar files into /libs AND remove any from your 'implementation' statements.

Much easier if you can find another repository instead of messing with all the individual .aar files!

For those who want to try the easier way, just go here Android Studio Archive and download the Android Studio v4.1 (Oct 12, 2020) and install it. It is working fine, I have checked it myself.