How do you enable NSZombie in Instruments of Xcode 4.1 under Lion?

This is ONLY regarding the new Xcode 4.1, specifically running on Lion. How do you enable NSZombie in Instruments ? It is no longer in Allocations in the (i) icon under Launch Configuration as in Xcode 4.0. Nor is there a Library entry called Zombies.

Of course the problem is I cannot fall back to Xcode 4.0 because it refuses to run under Lion, so I'm in a pickle ! Any other bleeding edge developers using Lion who, with more experience than myself, can help dig this out ? Thanks. -Ric

I got this very useful answer from Apple regarding my own question. It is verbatim -

ME: Is there an update as to how to find those tough deallocated objects, testing on the device, using Xcode 4.1.1 and/or Instruments ?

APPLE: First up, the hack shown above [in Apple's Forum] has been obsoleted by internal changes to the OS, namely, Zombie setup is now done by CF. You can force zombies enabled using the code shown below:

IMPORTANT: The _CFEnableZombies function is private, so you don't even think about putting this code into a production app. However, it's not secret; you can see how it's implemented by looking in the Darwin open source for Lion.

If you do this, your app will stop (with a breakpoint exception) when you message a zombie, regardless of how you run it. So you can run it in Instruments with the Allocations instrument and get both zombie detection and allocation tracking.

Note that when a zombie is messaged the system prints something like this:

This doesn't appear in the Instruments console area; you'll have to use the Xcode Organizer (or iPCU) to view it.

ME: hope that is useful info for some of you in this situation.

It's a distinct instrument: 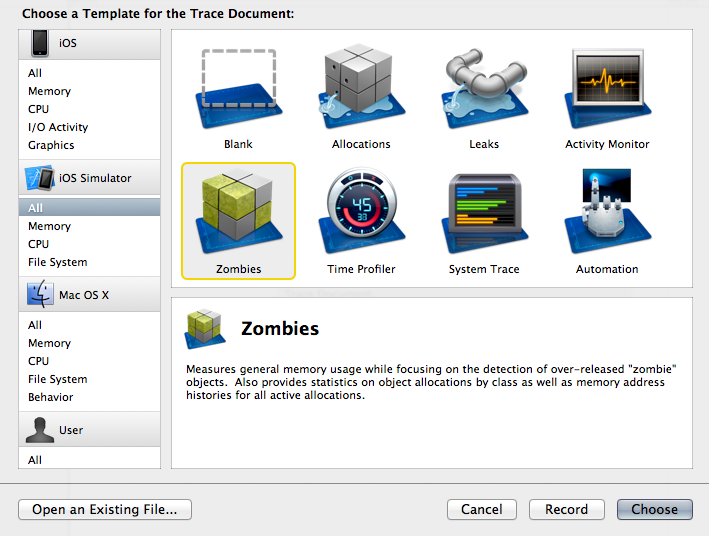 There is another way to run with NSZombie on the device, but this is done through XCode 4 not instruments.

To run with NSZombie on the device open your XCode Project and click on the top menu item "Product" then hold down alt and click "Run" this will open a separate window where you will see "Environment Variables" in the bottom of the window. Hit the "+" and enter "NSZombieEnabled" for the name and "YES" for the value.

Not the answer you're looking for? Browse other questions tagged ios xcode nszombie nszombieenabled or ask your own question.

614
How can I indent multiple lines in Xcode?
457
How do I set up NSZombieEnabled in Xcode 4?
1231
Xcode - How to fix 'NSUnknownKeyException', reason: … this class is not key value coding-compliant for the key X" error?
1446
How to “add existing frameworks” in Xcode 4?
754
How do you trigger a block after a delay, like -performSelector:withObject:afterDelay:?
305
How to enable NSZombie in Xcode?
480
How to install Xcode Command Line Tools
980
How to download Xcode DMG or XIP file?
409
How to update Xcode from command line
368
How do you perform wireless debugging in Xcode 9 with iOS 11, Apple TV 4K, etc?