this is my qframe object

this is my scrollarea with a vboxlayout in a widget

This is my result 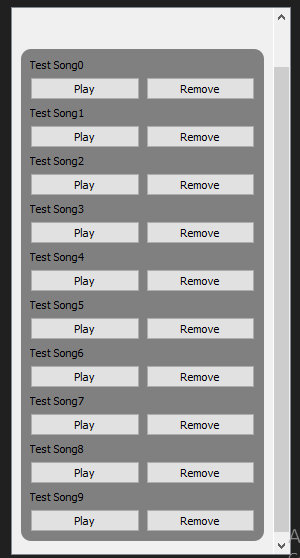 i dont want all the qframes joining. i want them as separate qframes in their own grey rounded rectangle bg

A layout should be an instance attribute, while you're creating only a single layout as a class attribute, which means that the same layout is being shared for every new instance of PlaylistItem.

The result is that every time a new PlaylistItem is created, the contents of the previous will be reparented to the new. At the end of the for loop, you'll have 9 completely empty QFrames, and the last one will have all the previously created labels and buttons instead. This is also the reason for the big margin on top of the frame: that space is actually the sum of the spacings between the (now) empty frames.

You should be much more careful when using class attributes, since the are always shared amongst all instances (unless they are overwritten by instance attributes).

I suggest you to do some more studying on classes, instances, methods and instances.

Not the answer you're looking for? Browse other questions tagged python user-interface pyqt pyqt5 or ask your own question.

2992
How can a file be copied?
4843
How can I safely create a nested directory in Python?
1856
How can I remove a trailing newline?
2616
How do you split a list into evenly sized chunks?
3078
How can I add new keys to a dictionary?
1806
How can I count the occurrences of a list item?
2888
List changes unexpectedly after assignment. Why is this and how can I prevent it?
2026
How to read a file line-by-line into a list?
2635
How can I install pip on Windows?
2258
How can I remove a key from a Python dictionary?