I have a customer that has an old non-existant application; he had a problem with the company that made the application and they won't disclose his database password. He realized that he signed a contract (back then) where it said that he was sort of "renting" the application and they had no right to disclose anything. This customer found out that he's not the only one with the same problem with that company. He's a Dentist and other dentists with the same old application experienced the same problems when trying to buy a new software and attempted to migrate their patients to the new system.

In either case, he wants to open his little firebird database, so we can at least extract some data to our SQL Servers. I have tried with the default 'masterkey' (which is, in fact, 'masterke' due to the 8 char limit) to no avail.

Now I know he could go legal and try to force the company to release his information, but I want to do it the short way. Does anybody know an app that can brute force/crack a legacy Firebird password?

EDIT: The legacy software is "STOMA-W", I cannot even find it on Internet. They are located in Asturias, Spain.

Provided not for the SYSDBA account, you may reset forgotten passwords for users with FlameRobin. After registering the database server on your localhost, use the Manage users... function in the context menu: 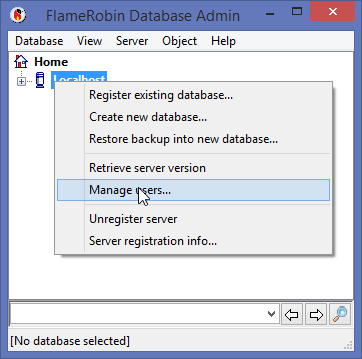 Here you get a list of users with options to delete or view/modify properties. If you click on the properties icon, you enter this dialogue where you simply enter the new password twice:

There is also IBConsole which comes packaged with the InterBase/Firebird SDK. It has similar functions.

Not the answer you're looking for? Browse other questions tagged firebird legacy brute-force interbase forgot-password or ask your own question.