Which programming languages have the most publicly available libraries?

I had assumed that there would be an easy to find list of programming languages sorted by the number of libraries that they have. I have been able to find no such thing. Is there any way to find or make such a list? Specifically, what would be the top 5? I understand that this would require defining what is and isn't a library, but I was shocked to see that I couldn't find even as much as an attempt at such a list.

The top three are:

Please Note - Having more libraries Does not mean it's better.

It strongly depends on the use.

This is a bit difficult question as it depends on what do you count as a publicly available library. One way is to check most used languages on GitHub. Checking out The 2020 State of the OCTOVERSE, the top three are:

I'm not sure there is any plausible, comprehensive and credible statistical data on which languages have the most publicly available libraries, that covers, at least, substantial number of programming languages (not even talking about all languages).

Therefore, your question will, most likely, lead to opinion based answers, and you should avoid asking such questions on Stack Overflow.

The only reliable resources that come to my mind, and that will give you the data about popularity of the programming languages (not publicly available APIs) are Tiobe and Redmonk.

I rank programming languages by their efficiency to solve problems in either a general case (otherwise unspecified) or in a specific domain such as:

Consider the following. According to IEEE, the popularity of a programming language is measured by quantifying these indicators:

The result is this 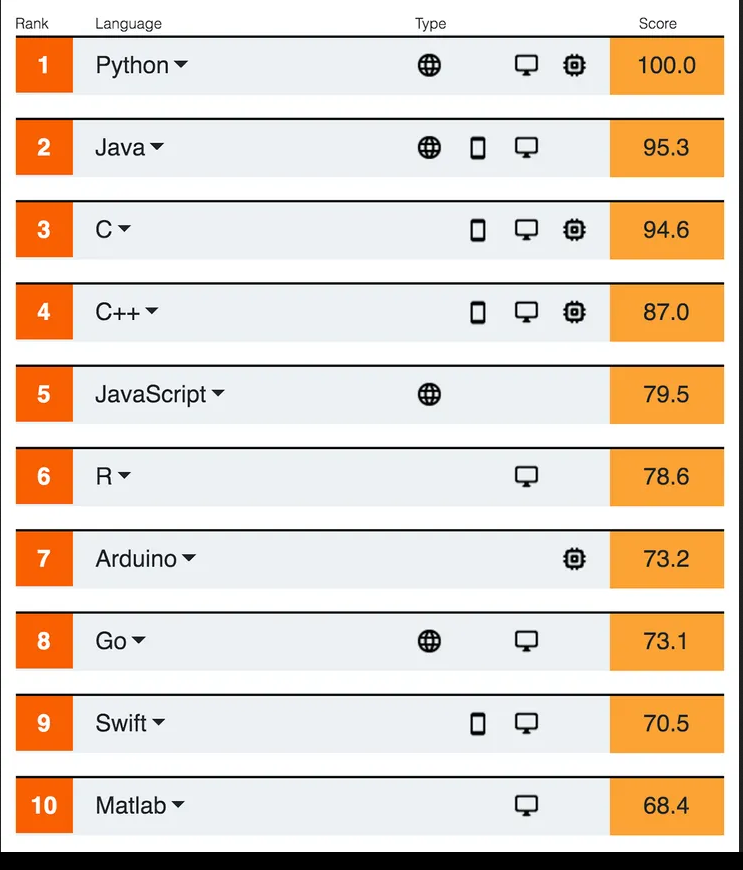 R and javascript/typescript are in the same list. However, they are primarily used in different domains. This does NOT mean that R cannot be used to write a solution that would typically be written in javascript, it simply means that it is the wrong tool for the job.

A little more detail on this.

It is important to understand, that the problems within the domain, are what necessitate the development of a new programming language library if one does not exist already. And not the other way around.

One can also argue, that continual improvement of technological standards, leads to new, and improved libraries at a faster pace.

Not the answer you're looking for? Browse other questions tagged package language-comparisons or ask your own question.

4
Moving a C# Program to a different language
1
what are some cross-language libraries for people who know other languages (similar to phpjs)
9
Scala import multiple packages
106
Whats the difference between a module and a library in Python?
0
Where does Android store all packages info including app label?
5
How can python libraries of different projects be in the same package?
0
What is the purpose of loading a package in a function?