In R, conditionally left join two tables depending on the value of an indicator variable in the left-hand-side table

I've got two dataframes about baseball cards and their market value. This information comes from Baseball Card "Almanacs", guides to cards' value published every year.

The first, d, is a table with the card_id of each card, as well as an indicator almanac_flag, which tells you if the card_id in that row came from the either the 1999 or 2009 editions of the Baseball Card Almanac: 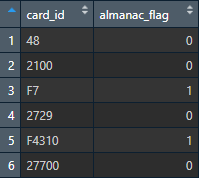 The second dataframe is d2, which contains (not all) equivalent id's for 1999 and 2009, along with a description of which baseball player is depicted in that card. Note that d2 doesn't have all the ID's that appear in d -- it only has 3 "matches" and that's totally fine.

I want to join these two tables so I get a table that looks like this: 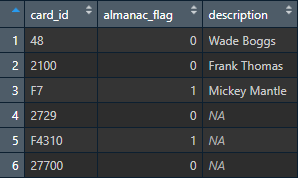 Which gives me this:

If we do the reshape to 'long' format from 'd2', it should work

Not the answer you're looking for? Browse other questions tagged r join dplyr or ask your own question.