"Configuring the trigger failed, edit and save the pipeline again" with no noticeable error and no further details

I have run in to an odd problem after converting a bunch of my YAML pipelines to use templates for holding job logic as well as for defining my pipeline variables. The pipelines run perfectly fine, however I get a "Some recent issues detected related to pipeline trigger." warning at the top of the pipeline summary page and viewing details only states: "Configuring the trigger failed, edit and save the pipeline again."

The odd part here is that the pipeline works completely fine, including triggers. Nothing is broken and no further details are given about the supposed issue. I currently have YAML triggers overridden for the pipeline, but I did also define the same trigger in the YAML to see if that would help (it did not).

I'm looking for any ideas on what might be causing this or how I might be able to further troubleshoot it given the complete lack of detail that the error/warning provides. It's causing a lot of confusion among developers who think there might be a problem with their builds as a result of the warning.

Here is the main pipeline. the build repository is a shared repository for holding code that is used across multiple repos in the build system. dev.yaml contains dev environment specific variable values. Shared holds conditionally set variables based on the branch the pipeline is running on.

Then this is the start of the actual job yaml. It provides a reusable definition of the job that can be used in more than one over-arching pipeline:

Finally, we have the variable YAML which conditionally sets pipeline variables based on what we are building:

You can check my post here : Azure DevOps pipeline trigger issue message not going away

As I can see in your YAML file, you are using this branch : 'refs/heads/users/ahenderson/azure_devops_build'.

I think some YAML files you are refering are missing from the branch defined as default in your build there : 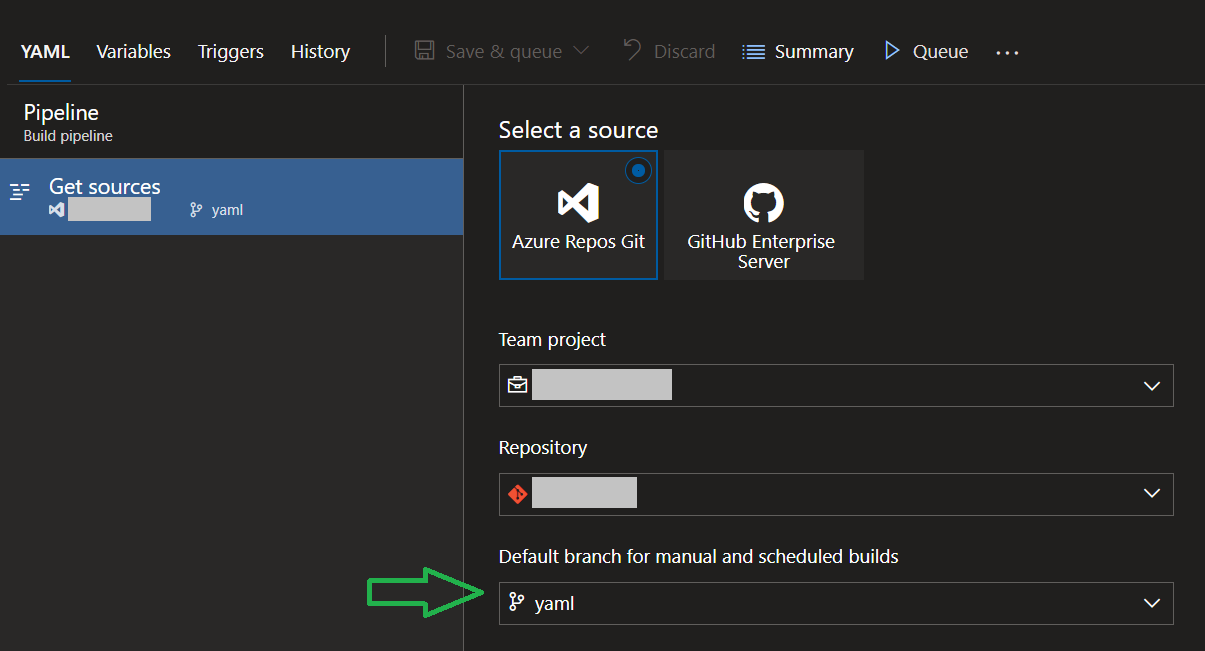 Switch to your branch

It would be nice if Microsoft would give a more useful error message here, something to the extent of the values not being found for a given variable, but adding defaults does seem to have fixed the problem.

In our case it was because the path to the YAML file started with a slash: /builds/build.yaml

In my case I had replaced the trigger in the yaml-file. The pipeline then does not now where to start.

8
Azure DevOps pipeline trigger issue message not going away
0
Why am I not able to trigger my pipeline upon PR merge into master?