Why is WSL extremely slow when compared with native Windows NPM/Yarn processing?

I am working with WSL a lot lately because I need some native UNIX tools (and emulators aren't good enough). I noticed that the speed difference when working with NPM/Yarn is incredible.

I conducted a simple test that confirmed my feelings. The test was running npx create-react-app my-test-app and the WSL result was Done in 287.56s. while GitBash finished with Done in 10.46s..

This is not the whole picture, because the perceived time was higher in both cases, but even based on that - there is a big issue somewhere. I just don't know where. The project I'm working on uses tens of libraries and changing even one of them takes minutes instead of seconds.

Is this something that I can fix? If so - where to look for clues?

Since you mention executing the same files (with proper performance) from within Git Bash, I'm going to make an assumption here. Correct me if I'm wrong on this, and I'll delete the answer and look for another possibility.

This would be explained (and expected) if your files are stored on /mnt/c (a.k.a. C:, or /C under Git Bash) or any other Windows drive, as they would likely need to be to be accessed by Git Bash.

WSL2 uses the 9P protocol to access Windows drives, and it is currently known to be very slow when compared to:

I've seen a git clone of a large repo (the WSL2 Linux kernel Github) take 8 minutes on WSL2 on a Windows drive, but only seconds on the root filesystem.

If you look at Microsoft's Comparing WSL 1 and WSL 2 the 'Performance across the OS file systems' is explicitly worse in WSL2. 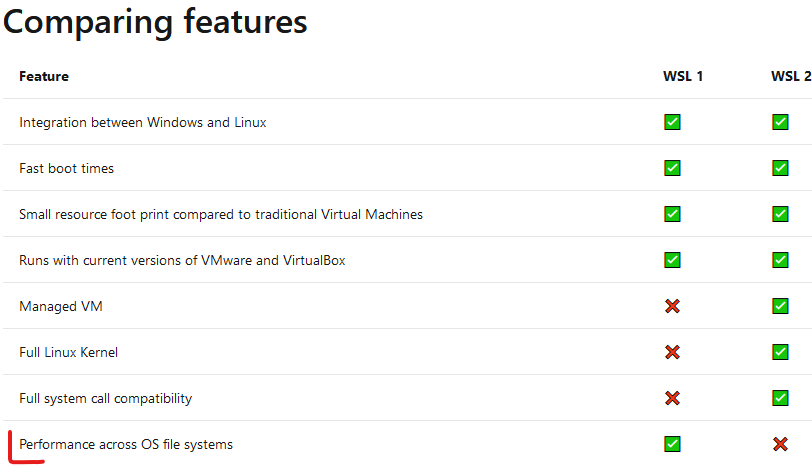 This means I needed to swap to version 1.

107
'npm install' extremely slow on Windows
10
How can nodemon be made to work with WSL 2?
12
How to run multiple WSL2 instances on Windows?
0
HMR not working (Parcel, Webpack 5) in WSL2/Ubuntu 22.04
0
Slow git autocomplete with WSL2 and zsh