Let's say we have a min.css file that needs to be imported globally:

And some scss styles applied on a component level:

For comparison, you can see below how the styles are evaluated (notice the behaviour of the background properties between scss and min.css): 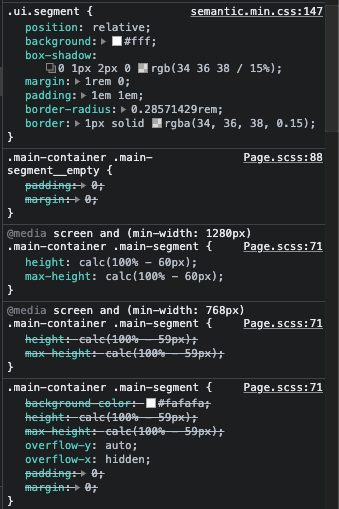 Above you can see the min.css overrides the scss styles; Below, I compiled all scss before runtime and in this case, the scss files will be overriding the min.css ones properly (background-color will override background): 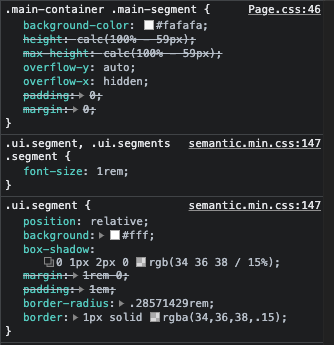 I'd think the problem is caused because the scss styles are being processed first, so they get overridden by the styles on the min.css, even though the min.css is imported on index.js while the other scss are imported down the tree on the component level.

Given such supposition, I created an index.scss (imported on index.js) which contains all the app styles:

And that will work, as the component styles will be overriding the minified ones.

A problem I would think of this though, is that we would be importing all styles even if we won't require them all straight up, so I'd suppose that could degrade performances (please correct me if I'm wrong).

Given the above, is there any suggestion on how this could be approached in a better way? Any opinion in merit is highly welcomed, thank you in advance!

You should change the order of import

Not the answer you're looking for? Browse other questions tagged javascript css reactjs performance sass or ask your own question.

872
Can you force a React component to rerender without calling setState?
646
Detect click outside React component
416
Setting a backgroundImage With React Inline Styles
64
How to make React CSS import component-scoped?
2
In an angular CLI app is there a way to not load the centralized CSS/SCSS for a particular component
3
React reusable component library styles not loading
0
SASS: imported scss in index.js not rendering (using create-react-app)
17
Angular SCSS Global Variable Import
0
component style not taking precedence over global css in react app