so, I'm trying to create a following directory:

Path is constructed in the loop, starting from: d:\temp and so on, creating non-existent directories along the way, so it first creates:

and.... then it comes to the last bit nul it throws this exception: 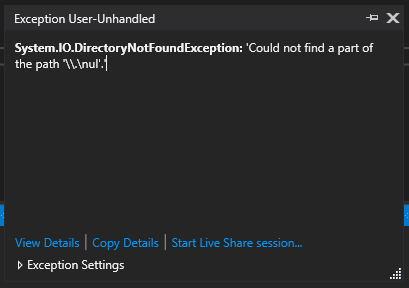 In Windows, nul is a reserved file name. No file or directory may be named that. Other reserved names include:

'nul' is a device file meaning that no file/folder can have that name. instead of

Never knew this one until I came against it - it's worth nothing the Windows Directory reserved names and all the rest.

Taken from about article: https://docs.microsoft.com/en-us/windows/win32/fileio/naming-a-file

The following fundamental rules enable applications to create and process valid names for files and directories, regardless of the file system:

Use a period to separate the base file name from the extension in the name of a directory or file.

Use a backslash as required as part of volume names, for example, the "C:" in "C:\path\file" or the "\server\share" in "\server\share\path\file" for Universal Naming Convention (UNC) names. For more information about UNC names, see the Maximum Path Length Limitation section.

Do not assume case sensitivity. For example, consider the names OSCAR, Oscar, and oscar to be the same, even though some file systems (such as a POSIX-compliant file system) may consider them as different. Note that NTFS supports POSIX semantics for case sensitivity but this is not the default behavior. For more information, see CreateFile.

Use any character in the current code page for a name, including Unicode characters and characters in the extended character set (128–255), except for the following:

Characters whose integer representations are in the range from 1 through 31, except for alternate data streams where these characters are allowed. For more information about file streams, see File Streams.

Any other character that the target file system does not allow.

Use a period as a directory component in a path to represent the current directory, for example ".\temp.txt". For more information, see Paths.

Use two consecutive periods (..) as a directory component in a path to represent the parent of the current directory, for example "..\temp.txt". For more information, see Paths.

Do not use the following reserved names for the name of a file:

Do not end a file or directory name with a space or a period. Although the underlying file system may support such names, the Windows shell and user interface does not. However, it is acceptable to specify a period as the first character of a name. For example, ".temp".

669
Why catch and rethrow an exception in C#?
928
How do I use Assert to verify that an exception has been thrown?
9
Windows temp directory details (Java)
64
CryptographicException "Key not valid for use in specified state." while trying to export RSAParameters of a X509 private key
2
How to remove multiple versions of Python from the Windows registry
0
Listbox RemoveAt throws an exception
1
How do I fix this small (and probably simple) DirectoryInfo Syntax error?
0
Asp .Net Core Directoy not found problem when trying to start
0
Files disappear after they fail to be moved