How are we doing? Please help us improve AWS. Take our short survey

Learn more about Teams
Would you recommend AWS? Take our short survey

How to automatically start 2 Java jars on AWS EC2?

I'm learning to deploy Spring Boot apps on AWS EC2. And I know how to automate app launch, when I start the EC2 instance, I don't need to manually use the command java -jar java-service.jar, I just add this command in the /etc/rc.local file and that is all. But I have 2 microservice, and I want to start both of them automatically, but if I try to add both commands in the /etc/rc.local it's not working, only the first service will start, the second service will not start. So I have the commands added like this: 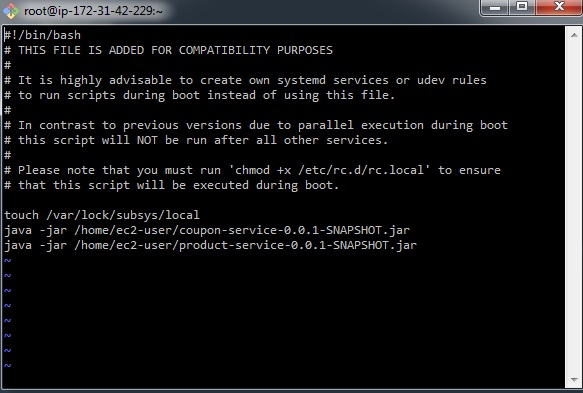 And after I start the EC2 instance only the first service is started:

I am not a unix expert, but I see the only issue in running 2 java commands from terminal is that unless the first command returns, the next command is not executed. So, I think the solution would be run the 1st command in some interactive mode so that the other commands can be executed simultaneously.

There are ways in unix shell to run a command in background. I found this useful link - https://www.maketecheasier.com/run-bash-commands-background-linux/

In bash terminal, a command can be made to run in background by appending it with &. So, I think you should be able to start both jars if you do something like -

I recommend to use Systemd. Create a Systemd unit file for every microservice, save it in /etc/systemd/system/my-app.service. Something like that:

After that, you can use:

Another solution is to bundle your jars into Docker images. This of course requires Docker runtime and adds an overhead, but it also has some benefits:

You can read here to learn how to create Spring Boot Docker images. After you build an image. You start it like this.:

You can run as many docker run commands you need, one after another.

I am not sure which system you are using in starting application: For linux base system, you can use crontab to schedule the task when the server reboot. Follow this steps:

This method works in my Debian system. For more details, you can refer to How to automatically run program on Linux startup

If you are running from bash, then join two jar commands with "&" like below.

NOTE: Both services should have different ports.

3885
How do I efficiently iterate over each entry in a Java Map?
2603
How do I call one constructor from another in Java?
4613
How do I read / convert an InputStream into a String in Java?
4023
How do I generate random integers within a specific range in Java?
2320
How to get an enum value from a string value in Java
2636
How do I determine whether an array contains a particular value in Java?
2472
How do I declare and initialize an array in Java?
3437
How do I convert a String to an int in Java?
3671
How can I create a memory leak in Java?
941
"UNPROTECTED PRIVATE KEY FILE!" Error using SSH into Amazon EC2 Instance (AWS)