Factory Pattern. When to use factory methods?

When is it a good idea to use factory methods within an object instead of a Factory class?

I like thinking about design pattens in terms of my classes being 'people,' and the patterns are the ways that the people talk to each other.

So, to me the factory pattern is like a hiring agency. You've got someone that will need a variable number of workers. This person may know some info they need in the people they hire, but that's it.

In the same way, using a Factory allows the consumer to create new objects without having to know the details of how they're created, or what their dependencies are - they only have to give the information they actually want.

So, now the consumer of the ThingFactory can get a Thing, without having to know about the dependencies of the Thing, except for the string data that comes from the consumer.

Factory methods should be considered as an alternative to constructors - mostly when constructors aren't expressive enough, ie.

is not as expressive as:

Factory classes are useful when you need a complicated process for constructing the object, when the construction need a dependency that you do not want for the actual class, when you need to construct different objects etc.

One situation where I personally find separate Factory classes to make sense is when the final object you are trying to create relies on several other objects. E.g, in PHP: Suppose you have a House object, which in turn has a Kitchen and a LivingRoom object, and the LivingRoom object has a TV object inside as well.

The simplest method to achieve this is having each object create their children on their construct method, but if the properties are relatively nested, when your House fails creating you will probably spend some time trying to isolate exactly what is failing.

The alternative is to do the following (dependency injection, if you like the fancy term):

Here if the process of creating a House fails there is only one place to look, but having to use this chunk every time one wants a new House is far from convenient. Enter the Factories:

Thanks to the factory here the process of creating a House is abstracted (in that you don't need to create and set up every single dependency when you just want to create a House) and at the same time centralized which makes it easier to maintain. There are other reasons why using separate Factories can be beneficial (e.g. testability) but I find this specific use case to illustrate best how Factory classes can be useful.

It is important to clearly differentiate the idea behind using factory or factory method. Both are meant to address mutually exclusive different kind of object creation problems.

Let's be specific about "factory method":

First thing is that, when you are developing library or APIs which in turn will be used for further application development, then factory method is one of the best selections for creation pattern. Reason behind; We know that when to create an object of required functionality(s) but type of object will remain undecided or it will be decided ob dynamic parameters being passed.

Now the point is, approximately same can be achieved by using factory pattern itself but one huge drawback will introduce into the system if factory pattern will be used for above highlighted problem, it is that your logic of crating different objects(sub classes objects) will be specific to some business condition so in future when you need to extend your library's functionality for other platforms(In more technically, you need to add more sub classes of basic interface or abstract class so factory will return those objects also in addition to existing one based on some dynamic parameters) then every time you need to change(extend) the logic of factory class which will be costly operation and not good from design perspective. On the other side, if "factory method" pattern will be used to perform the same thing then you just need to create additional functionality(sub classes) and get it registered dynamically by injection which doesn't require changes in your base code.

They're also useful when you need several "constructors" with the same parameter type but with different behavior.

It is good idea to use factory methods inside object when:

It is good idea to use abstract factory class when:

Product: It defines an interface of the objects the Factory method creates.

ConcreateCreator: Implements the Factory method to return an instance of a ConcreteProduct

Problem statement: Create a Factory of Games by using Factory Methods, which defines the game interface.

This example shows a Factory class by implementing a FactoryMethod.

Creates objects without exposing the instantiation logic to the client.

Define an interface for creating an object, but let the subclasses decide which class to instantiate. The Factory method lets a class defer instantiation to subclasses

When to use: Client doesn't know what concrete classes it will be required to create at runtime, but just wants to get a class that will do the job.

It's really a matter of taste. Factory classes can be abstracted/interfaced away as necessary, whereas factory methods are lighter weight (and also tend to be testable, since they don't have a defined type, but they will require a well-known registration point, akin to a service locator but for locating factory methods).

Factory classes are useful for when the object type that they return has a private constructor, when different factory classes set different properties on the returning object, or when a specific factory type is coupled with its returning concrete type.

If you only have one class that's consuming the factory, then you can just use a factory method within that class.

Consider a scenario when you have to design an Order and Customer class. For simplicity and initial requirements you do not feel need of factory for Order class and fill your application with many 'new Order()' statements. Things are working well.

Now a new requirement comes into picture that Order object cannot be instantiated without Customer association (new dependency). Now You have following considerations.

1- You create constructor overload which will work only for new implementations. (Not acceptable). 2- You change Order() signatures and change each and every invokation. (Not a good practice and real pain).

Instead If you have created a factory for Order Class you only have to change one line of code and you are good to go. I suggest Factory class for almost every aggregate association. Hope that helps.

if you want to create a different object in terms of using. It is useful.

Any class deferring the object creation to its sub class for the object it needs to work with can be seen as an example of Factory pattern.

I think it will depend of loose coupling degree that you want to bring to your code.

In other words, it's easier to change things if you use factory method than if you use a simple factory (known as factory class).

Look into this example: https://connected2know.com/programming/java-factory-pattern/ . Now, imagine that you want to bring a new Animal. In Factory class you need to change the Factory but in the factory method, no, you only need to add a new subclass.

Factory classes are more heavyweight, but give you certain advantages. In cases when you need to build your objects from multiple, raw data sources they allow you to encapsulate only the building logic (and maybe the aggregation of the data) in one place. There it can be tested in abstract without being concerned with the object interface.

I have found this a useful pattern, particularly where I am unable to replace and inadequate ORM and want to efficiently instantiate many objects from DB table joins or stored procedures.

I liken factories to the concept of libraries. For example you can have a library for working with numbers and another for working with shapes. You can store the functions of these libraries in logically named directories as Numbers or Shapes. These are generic types that could include integers, floats, dobules, longs or rectangles, circles, triangles, pentagons in the case of shapes.

The stated purpose of the Factory Patterns is: Define an interface for creating an object, but let subclasses decide which class to instantiate. Factory Method lets a class defer instantiation to subclasses.

Example: we know that we have to create a vehicle object but we don't know if it flies or it works on ground.

Define an interface for creating an object, but let subclasses decide which class to instantiate. Factory method lets a class defer instantiation to subclasses.

Imagine you have a different customers with different preferences. Someone need Volkswagen another one Audi and so on. One thing is common - it's a car.

To make our customer happy we need a factory. The factory only should know which car the customer want and will deliver such car to customer. If later we have some another car we can easily extend our car park and our factory.

Below you can see an example (ABAP): 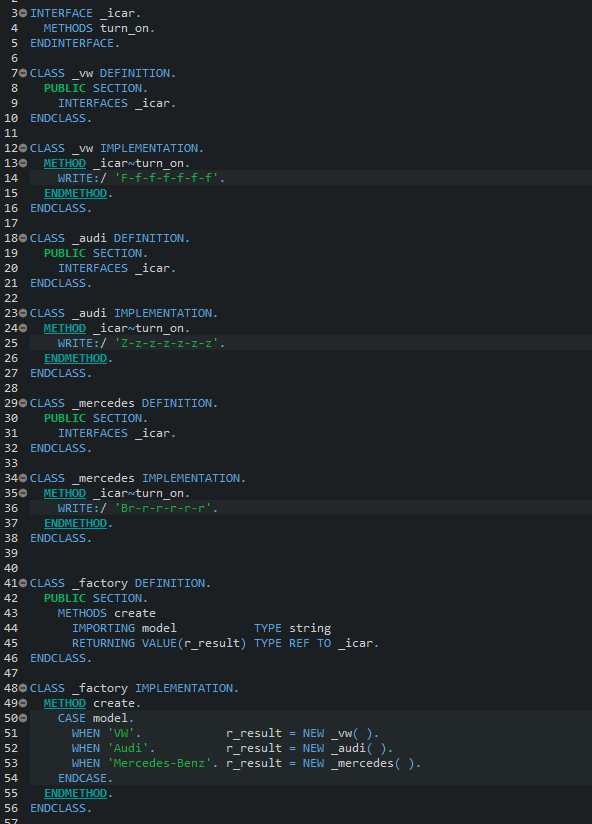 Now we will create an instance of the factory and listening for the customers wishes.

We created three different cars with only one create( ) method.

Quite often is factory pattern very usefull if you want to make the logic more clean and the program more extensible.

13
Why should one use factory method to create objects
2
Any advantages using a factory to get a particular object?
-2
What is factory method in java?
0
Factory Pattern and dependencies
-1
Value of Factory Classes
513
What is the basic difference between the Factory and Abstract Factory Design Patterns?
226
Design Patterns: Factory vs Factory method vs Abstract Factory
38
"Program to an interface". What does it mean?
18
When to use the abstract factory pattern?
5
Factory Method Pattern Example in Java troubles
See more linked questions

530
On design patterns: When should I use the singleton?
1953
Difference between static class and singleton pattern?
546
Dependency Injection vs Factory Pattern
373
How to implement the factory method pattern in C++ correctly
551
What are the differences between Abstract Factory and Factory design patterns?
226
Design Patterns: Factory vs Factory method vs Abstract Factory