... if you want something that is red.

... if you want something red and translucent.

Is there any terse way of writing partially transparent colors in hexadecimal? I want something like:

I am getting all my colors in hexadecimal, and having to convert them all to the decimal 0-255 scale is annoying.

Three weeks ago (18th of December 2014) the CSS Color Module Level 4 editor's draft was submitted to the CSS W3C Working Group. Though in a state which is heavily susceptible to change, the current version of the document implies that in the somewhat near future CSS will support both the 4 and 8-digit hexadecimal RGBA notation.

Note: the following quote has irrelevant chunks cut out and the source may have been heavily modified by the time you read this (as mentioned above, it's an editor's draft and not a finalised document).
If things have heavily changed, please leave a comment letting me know so I can update this answer!

The first 6 digits are interpreted identically to the 6-digit notation. The last pair of digits, interpreted as a hexadecimal number, specifies the alpha channel of the color, where 00 represents a fully transparent color and ff represent a fully opaque color.

This is a shorter variant of the 8-digit notation, "expanded" in the same way as the 3-digit notation is. The first digit, interpreted as a hexadecimal number, specifies the red channel of the color, where 0 represents the minimum value and f represents the maximum. The next three digits represent the green, blue, and alpha channels, respectively.

What does this mean for the future of CSS colours?

This means that assuming this isn't completely removed from the Level 4 document, we'll soon be able to define our RGBA colours (or HSLA colours, if you're one of those guys) in hexadecimal format in browsers which support the Color Module Level 4's syntax.

When will I be able to use this in my client-facing products?

All jokes aside: it's currently only the start of 2015, so these will not be supported in any browser for quite some time yet - even if your product is only designed to work on the most up-to-date of browsers you'll probably not be seeing this in action in a production browser any time soon.

However, that said, the way CSS works means that we can actually start using these today! If you really want to start using them right now, as long as you add a fall back any non-supporting browsers will simply ignore the new properties until they are deemed valid:

As long as you're viewing this answer on a browser which supports the background and color properties in CSS, the <figure> element in result of the above snippet will look very similar to this:

Using the most recent version of Chrome on Windows (v39.0.2171) to inspect our <figure> element, we'll see the following: 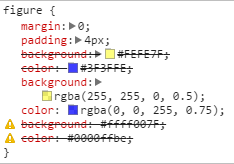 I found the answer after posting the enhancement to the question. Sorry!

simply add the Hex prefix to the hex colour value to add an alpha that has the equivalent opacity as the % value.

It is not possible, most probably because 0xFFFFFFFF is greater than the maximum value for 32bit integers

Use red, green, blue to convert to RGBA:

I'm afraid that's not possible. the rgba format you know is the only one.

If you can use LESS, there is a fade function.

Only internet explorer allows the 4 byte hex color in the format of ARGB, where A is the Alpha channel. It can be used in gradient filters for example:

Where dir can be: 1(horizontal) or 0(vertical) And the color strings can be hex colors(#FFAAD3) or argb hex colors(#88FFAAD3).

Well, different color notations is what you will have to learn.
Kuler gives you a better chance to find color and in multiple notations.
Hex is not different from RGB, FF = 255 and 00 = 0, but that's what you know. So in a way, you have to visualize it.
I use Hex, RGBA and RGB. Unless mass conversion is required, manually doing this will help you remember some odd 100 colors and their codes.
For mass conversion write some script like one given by Alarie. Have a blast with Colors.

if you target a color for a text or probably an element, this should be a lot easier to do.

Not the answer you're looking for? Browse other questions tagged css colors rgba or ask your own question.

3253
Set cellpadding and cellspacing in CSS?
2247
How do I give text or an image a transparent background using CSS?
3069
Is there a CSS parent selector?
3921
Change an HTML5 input's placeholder color with CSS
2055
How can I transition height: 0; to height: auto; using CSS?
1816
How do CSS triangles work?
2762
Is it possible to apply CSS to half of a character?