Import an existing Git project into Eclipse without a .project file

I've forked and cloned a project to the local machine from GitHub using the terminal and am trying to import it into Eclipse.

The problem is the clone from GitHub doesn't have a .project file, so when I go import -> projects from Git, I can only import as a general project. How can I import the project to Eclipse without doing git init? Most of the solutions I saw have .project already there when they cloned it from Git.

Create a new java project, Untick "Use default location" and browse the git project path by clicking browse button. It works for me. I have just imported a Git, netbeans project into Eclipse through this simple method.

After a while I got it working as expected...

Basically the wizard is broken. This is what worked for me (eclipse 4.2.2):

I've imported a general project (it was SQL code only) and this time it worked as expected (The screen doesn't allow you to change the project name nor directory, which makes sense at this point.)

Those are the same steps performed by the wizard, but apparently it doesn't get the information about the project being already deployed at the workspace, so you get the option to change those values and it complains about the project already existing there.

You should create a new project in Eclipse and specify that the project be located in the existing directory.

Choose "Create project from existing source" in the wizard: 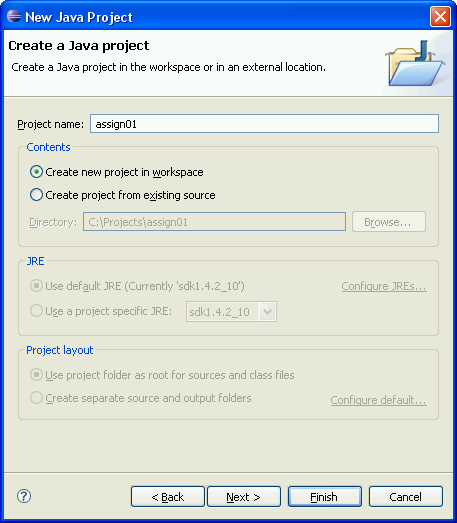 I use eclipse 3.7 ( indigo ) and I find this great solution:

2) from Filesystem folder, find and select the folder where the project is contained

3) right chick on folder, and select Promote to Project

Not the answer you're looking for? Browse other questions tagged eclipse git or ask your own question.

3377
View the change history of a file using Git versioning
3708
Make an existing Git branch track a remote branch?
1896
How to stop tracking and ignore changes to a file in Git?
3328
Remove a file from a Git repository without deleting it from the local filesystem
6424
How can I make Git “forget” about a file that was tracked, but is now in .gitignore?
3422
Move existing, uncommitted work to a new branch in Git
1280
'Must Override a Superclass Method' Errors after importing a project into Eclipse
4618
How to change the URI (URL) for a remote Git repository?
2566
How do you push a tag to a remote repository using Git?
1408
Download a single folder or directory from a GitHub repo