What's the difference between a catalog and a schema in a relational database?

I used to think schema were the "upper wrapper" object before the database itself. I mean DB.schema.<what_ever_object_name_under_schema>.

Well, the catalog "wrapper" is now quite confusing. Why should we need a catalog? For what purpose, precisely should the catalog be used?

When you install Postgres on a machine, that installation is called a cluster. ‘Cluster’ here is not meant in the hardware sense of multiple computers working together. In Postgres, cluster refers to the fact that you can have multiple unrelated databases all up and running using the same Postgres server engine.

A cluster is an implementation-defined collection of catalogs.

Exactly one cluster is associated with an SQL-session

So in both Postgres and the SQL Standard we have this containment hierarchy: 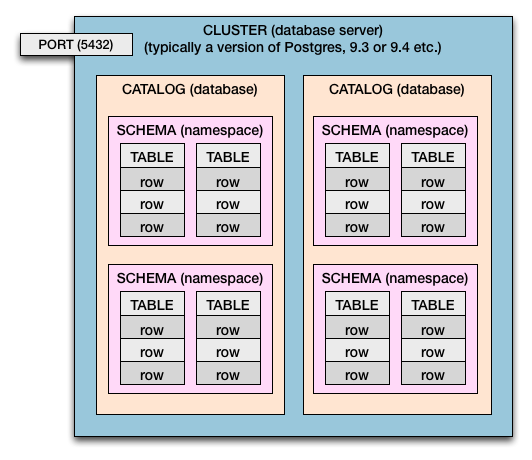 This diagram represents a single cluster. In the case of Postgres, you can have more than one cluster per host computer (or virtual OS). Multiple clusters is commonly done, for testing and deploying new versions of Postgres (ex: 9.0, 9.1, 9.2, 9.3, 9.4, 9.5).

If you did have multiple clusters, imagine the diagram above duplicated.

Different port numbers allow the multiple clusters to live side-by-side all up and running at the same time. Each cluster would be assigned its own port number. The usual 5432 is only the default, and can be set by you. Each cluster is listening on its own assigned port for incoming database connections.

But the IT operations team took a decision to run both databases on a single computer box (Linux, Mac, whatever). So on that box they installed Postgres. So one database server (database cluster). In that cluster, they create two catalogs, a catalog for each dev team: one named 'warehouse' and one named 'sales'.

Each dev team uses many dozens of tables with different purposes and access roles. So each dev team organizes their tables into schemas. By coincidence, both dev teams do some tracking of accounting data, so each team happens to have a schema named 'accounting'. Using the same schema name is not a problem because the catalogs each have their own namespace so no collision.

You can think of this example as a hierarchy…

Each dev team's software makes a connection to the cluster. When doing so, they must specify which catalog (database) is theirs. Postgres requires that you connect to one catalog, but you are not limited to that catalog. That initial catalog is merely a default, used when your SQL statements omit the name of a catalog.

You may hear the word schema used in a more general sense, meaning the entire design of a particular database's table structure. By contrast, in the SQL Standard the word means specifically the particular layer in the Cluster > Catalog > Schema > Table hierarchy.

Postgres uses both the word database as well as catalog in various places such as the CREATE DATABASE command.

Not all database system provides this full hierarchy of Cluster > Catalog > Schema > Table. Some have only a single catalog (database). Some have no schema, just one set of tables. Postgres is an exceptionally powerful product.

From the relational point of view :

In other words, the catalog contains detailed information (sometimes called descriptor information or metadata) regarding the various objects that are of interest to the system itself.

From the SQL standard point of view :

Catalogs are named collections of schemas in an SQL-environment. An SQL-environment contains zero or more catalogs. A catalog contains one or more schemas, but always contains a schema named INFORMATION_SCHEMA that contains the views and domains of the Information Schema.

From the SQL point of view :

A catalog is often synonymous with database. In most SQL dbms, if you query the information_schema views, you'll find that values in the "table_catalog" column map to the name of a database.

If you find your platform using catalog in a broader way than any of these three definitions, it might be referring to something broader than a database--a database cluster, a server, or a server cluster. But I kind of doubt that, since you'd have found that easily in your platform's documentation.

362
Difference Between Schema / Database in MySQL
136
Postgresql tables exists, but getting "relation does not exist" when querying
93
What is the difference between Trusted_Connection and Integrated Security in a connection string?
37
How to create a database with flyway?
7
Error:"Key ... is not present in table"
5
R: Copy/Clone full DB from SQL Server to local
0
How can I show the catalogs and schemas in postgresql?
3
Is `pg_user` a view or a catalog?
1
How do I access nested SQL tables in R?
1
psycopg2.OperationalError: FATAL: database does not exist
See more linked questions

5116
What is the difference between "INNER JOIN" and "OUTER JOIN"?
1101
How do I quickly rename a MySQL database (change schema name)?
1324
How can I list the tables in a SQLite database file that was opened with ATTACH?
2051
What is the "N+1 selects problem" in ORM (Object-Relational Mapping)?
393
What's the best strategy for unit-testing database-driven applications?
867
What's the difference between identifying and non-identifying relationships?
1535
What are the options for storing hierarchical data in a relational database?
704
Difference between rake db:migrate db:reset and db:schema:load
362
Difference Between Schema / Database in MySQL