(Solution has been found, please avoid reading on.)

To do this, I did some research on flood fill algorithms online.

I stumbled across the following video which explained how to implement an iterative flood fill algorithm in your code. The code used in the video was JavaScript, but I was easily able to convert the code from the video to Kotlin:

Here is an excerpt of the JavaScript code from the video: 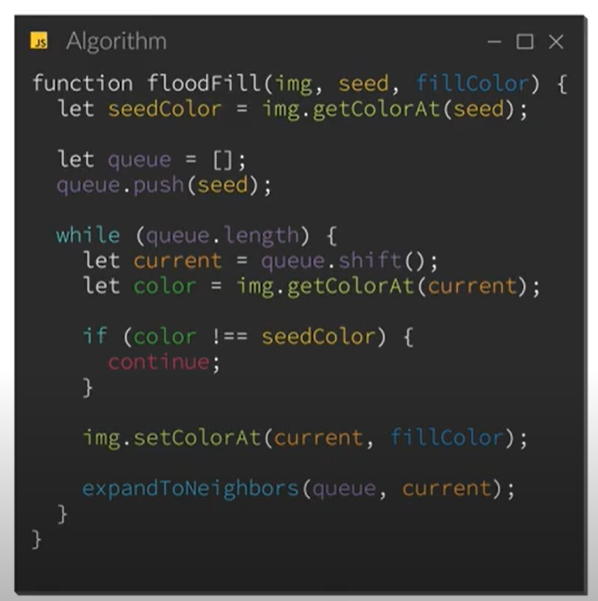 Now, I want to address two major issues I'm having with the code of mine:

A flood fill needs to be very fast and shouldn't take less than a second, the problem is, say I have a canvas of size 50 x 50, and I decide to fill in the whole canvas, it can take up to 8 seconds or more.

Here is some data I've compiled for the time it's taken to fill in a whole canvas given the spanCount value:

The conclusion from the data is that the flood fill algorithm is unusually slow.

Here is an excerpt of the expandToNeighbors function:

To understand the use of the expandToNeighbors function, I would recommend watching the video that I linked above.

(The if statements are there to make sure you won't get an IndexOutOfBoundsException if you try and expand from the edge of the canvas.)

This function will return the index of the north, south, west, and east pixels from the xyPositionData list which contains XYPosition objects.

(The black pixel is the from parameter.) 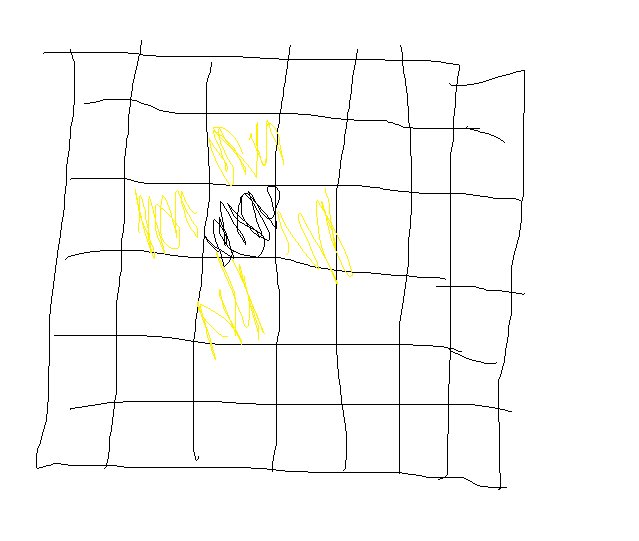 The xyPositionData list is initialized once in the convertXYDataToIndex function, here:

So, the code works fine (kind of) but the expandToNeighbors function is very slow, and it is the main reason why the flood fill algorithm is taking a long time.

My colleague suggested that indexOf may be slowing everything down, and that I should probably switch to a Map-based implementation with a key being XYPosition and a value being Int representing the index, so I replaced it with the following:

It functions the same way, only this time it uses a Map which is initialized here:

Converting the code to use a map increased the speed by around 20%, although the algorithm is still slow.

After spending a couple of days trying to make the algorithm work faster, I'm out of ideas and I'm unsure why the expandToNeighbors function is taking a long time. Any help would be appreciated to fix this issue.

Apologies if I didn't do a good enough job of explaining the exact issue, but I have tried my best. Implementation-wise it is quite messy unfortunately because of the whole list index to XYPosition conversions, but at least it works - the only problem is the performance.

So I have two one major problem, if anyone can try and find a solution for it, it would be great because I have tried to myself without much luck.

I've actually pushed the fill tool to GitHub as a KIOL (Known Issue or Limitation), so the user can use the fill tool if they want, but they need to be aware of the limitations/issues. This is so anyone who wants to help me fix this can have a look at my code and reproduce the bugs.

I understand that this question is extremely difficult to answer and will require a lot of thinking. I've tried myself to fix these issues but haven't had much success, so I'm offering 50 reputation for anyone who can assist.

I would recommend you clone PyxlMoose and reproduce the errors, then work from there. Relying on the code snippets isn't enough.

Formula for converting XY position to an index

Somebody in the comments suggested a formula for converting an XYPosition to an index value, I came up with the following method which works:

The only problem is - it increases the speed by around 50% but it's still taking around 10-15 seconds to fill in an area of 80 by 80 pixels, so it has helped to a large degree although it's still very slow. But thank you very much for the suggestion anyways, it has helped a lot :)

I think the performance issue is because of expandToNeighbors method generates 4 points all the time. It becomes crucial on the border, where you'd better generate 3 (or even 2 on corner) points, so extra point is current position again. So first border point doubles following points count, second one doubles it again (now it's x4) and so on.

If I'm right, you saw not the slow method work, but it was called too often.

How I fixed it:

Here is my new code:

I would say this is one of the simplest Android flood fill algorithms out there to understand, so if anyone is making an app similar to mine and they want a flood fill tool they can copy my code.

A guy in the comments called EvilTalk helped me with this.

2
Implementing a variation of the Flood Fill algorithm.
288
Representing and solving a maze given an image
1
Javascript flood fill algorithm getting caught in an infinite loop
24
Android - Canvas Black when using Flood-Fill
3
Canvas - floodfill leaves white pixels at edges for PNG images with transparent