\u200b (Zero width space) characters in my JS code. Where did they come from?

I am developing a front end of a web app using NetBeans IDE 7.0.1. Recently I had a very nasty bug, which I finally fixed.

Say I have code

I noticed that something gone wrong when I saw that size attribute doesn't work in Chrome (didn't checked in other browsers). When I opened that element in Inspector, it was interpreted as something like

Which was rather strange. After manually retyping the element string character-in-character, the bug was gone. When I undo'ed that change I noticed that Netbeans alerted me about some Unicode characters in my old code. It was \u200b - a zero width spaces after each '=', between '][' and in the end of the string. So the string appeared normal because zero width spaces wasn't displayed, but after escaping them my string was

Now where the hell did I get them?

I'm not sure where did I copied the code of element from, but it's definitely one of the following:

But I can't reproduce the bug with neither of that.

I use Netbeans 7.0.1 and Google Chrome 13.0 under Windows 7. No keyboard switchers or anything like it is running. Also I'm using Git for version control, but I didn't pulled that code, so it is very unlikely that Git is to blame. It can't be a stupid joke of my colleagues, because they are quite well-mannered.

Any suggestions who messed up my code?

Here's a stab in the dark.

My bet would be on Google Chrome Inspector. Searching through the Chromium source, I spotted the following block of code

It's quite possible that I'm simply barking up the wrong tree here, but it looks like zero-width spaces were being inserted (to handle soft text wrapping?) during the display of attributes. Perhaps the "Copy as HTML" function had not properly removed them?

After fiddling with the Chrome element inspector, I'm almost convinced that's where your stray \u200b came from. Notice how the line can wrap not only at visible space but also after = or chars matched by /([\/;:\)\]\}])/ thanks to the inserted zero-width space. 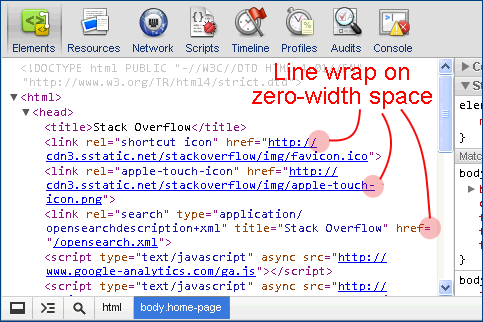 Unfortunately, I am unable to replicate your problem where they inadvertently get included into your clipboard (I used Chrome 13.0.782.112 on Win XP).

It would certainly be worth submitting a bug report should your be able to reproduce the behaviour.

This happened to me when I copied source code from another site into my editor. If your using visual studio code or Atom editor, this will highlight those pesky characters zero-width space \u200b) etc. As Mr Shawn Chin has addressed it already. I just happened to replicate the issue while I was copy pasting jquery code from a webpage.

When it happened: Copying text from Google Chrome Version 41.0.2272.118 m ( not tested with other browsers ) to Dreamweaver code window. This copied unwanted characters along the code like this happening here

you copied text from a webpage as

behind the scenes, this is what makes that line

Copied to an advanced editor like those you mentioned or Dreamweaver gives errors in browser, probably failing of javascript code too

Solution: When it happens, embrace the worth of notepad until this gets fixed by the big guys. It is more related to the editor then the browsers.

After longer than 6 years I am getting the same issue but I am able to reproduce it.

I am learning JavaScript from this blog which contains code snippets. Whenever I copy all the code from a snippet and paste it into the JavaScript editors of JS Fiddle or JS Bin I get some red tokens spread into the code. Here are screenshots of the first code snippet from the above blog post in the JS Fiddle and JS Bin. Hovering the mouse over one of these red tokens shows up the tip: "\u200b" (the zero-width space).

I'm working on Linux Ubuntu 16.04 and if I paste the code into one of my editors (Atom 1.22.1 or Geany 1.32) and then open the file in web browsers, I get the following errors in the console:

I hope this may help a bit to clarify why these zero-width spaces get copied into the clipboard.

I have similar issue with '\u200b' zero-width space character in my current project. I need to work on JSON object returned from server. Email object with '[at]' need to be replaced with '@' character. Surprisingly, several of the objects had the email address littered with 'space' in and around the '@'.

Long story short, I checked using Postman and scrutinised the returned JSON as RAW. Here is the raw example:

Not the answer you're looking for? Browse other questions tagged javascript html google-chrome netbeans unicode or ask your own question.

273
No visible cause for "Unexpected token ILLEGAL"
12
Detect enter in input elements of a certain class
3
unnecessary %E2%80%8B added in the url
-1
Getting the error: Uncaught SyntaxError: Invalid or unexpected token
0
Salesforce custom button returning 'Unexpected Token ILLEGAL?
1
Why would the existence of a CSS rule cause another not to match?
0
Adding a class to every second item with that has specific class
1
Unicode issue with pygithub and django
-1
String length shows that this string's length is 7, but actually string length is 6
0
NodeJS invalid syntax in function
See more linked questions