In my web app the user selects a large zip file via an "input file" button.
The file is then returned as a blob (see the snapshot zipfile1).
The program then reads chunks (individual files) of the zip file one after the other.
A test program reads through all the files in a sequence, and then repeats the sequence multiple times.
This works ok on various OSs (Windows Linux, MacOs, Android) via various browsers (Chrome, Firefox, Safari).
But on iOS sometimes the blob object is lost, and the process returns an error.
In such case I can select the file again to continue the process.

But I would like to do this programatically, without the need for manual intervention.
I still have the filename, but the blob size is 0 (see the snapshot zipfile2).

Is it possible to re-open the file programatically?
Thanks

I tried to call

to have some kind of a "handle" to the file in memory without the actual data.
The idea was that later on, if the file object gets corrupt, I can fetch(zipFileUrl) to reopen the file.
Unfortunately, createObjectURL creates a memory blob from the entire file in memory, which is useless to me because the file is too big... 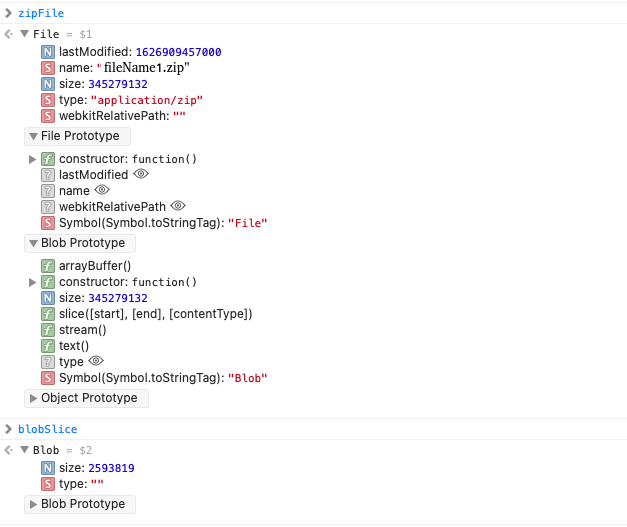 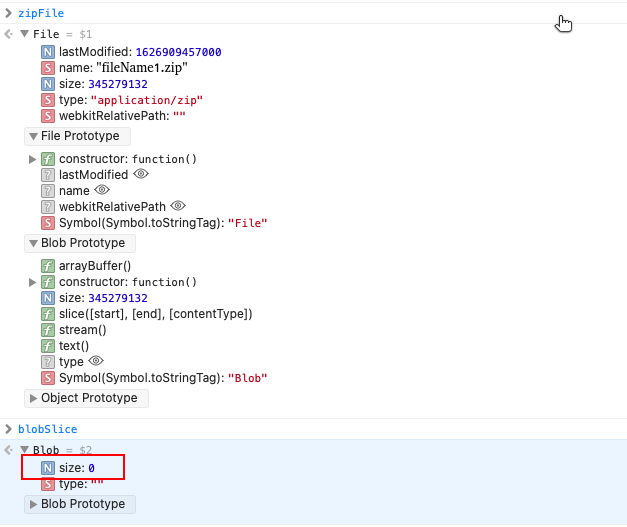 1
In Javascript, when opening a file via an "input file" button, is the entire file read into memory

547
jQuery - setting the selected value of a select control via its text description
2990
How can I know which radio button is selected via jQuery?
181
input type=file show only button
299
HTML input file selection event not firing upon selecting the same file
309
How to get full path of selected file on change of <input type=‘file’> using javascript, jquery-ajax?
0
Saving continuosly generated data from browser to file
2
Transform Blob from XmlHttpRequest without loading it completely into memory
8
Show image from local zip with JSZip
11
Chrome memory issue - File API + AngularJS