Is there a good way to do this type of mining?

I am trying to find points that are closest in space in X and Y directions (sample dataset given at the end) and am looking to see if there are smarter approaches to do this than my trivial (and untested) approach. The plot of these points in space looks something like the following and am trying to find sets of points marked inside the boxes i.e. the output I am looking for is a set of groups: 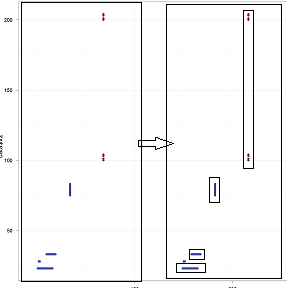 For the horizontal bands, I am thinking I could just go ahead and use small sliding windows of size say, 5 or 10 (which should really be determined from the global information of which size will give the maximum grouped points but I am still exploring a good approach) and search for contiguous points because a break would not be considered a horizontal band anymore.

Other than this trivial solution, I can't think of anything smart that can be done here as this problem appears deceptively simple to me. Am I missing something here? Does this fall into some known class of problems and if so, is there a good and scalable approach to achieve this?

This is a little late, but this problem has been worrying me for some time. I was sure it could be solved with mixed integer / linear programming techniques and asked for help in this question: Identifying column and row clusters with linear programming

However, after getting a reply there, I had the insight that your problem, at least as I understand it, is so simple (when framed as a constraint program) that you can solve it trivially with a simple program (which you already knew). In other words, constraint programming would be a cool way to solve this, but, at least with the approach I found, would give you the same answer as something much simpler.

I'll explain below my reasoning, how I would implement it with a constraint solving package, and then give the final, trivial, algorithm.

The most important detail is the difference between horizontal and vertical groups. As far as i can see, anything that aligns vertically can be in the same group. But horizontal groups are different - components have to be close together.

The hardest part of solving a problem with constraints seems to be finding a way to describe the limits in a way that the solver can understand. I won't go into the details here, but solvers are frustratingly limited. Luckily I think there is a way to do this here, and it is to consider horizontal neighbours: if there are N points in a row then we have N-1 sets of neighbours (for example, with 4 points A B C and D there are the three pairs AB, BC, and CD).

For each pair, we can give a score, which is the number of spaces between them (S_i) scaled by some factor K, and a flag (F_i) which is 0 or 1. If the pair are in the same horizontal group then we set the flag to 1, otherwise it is zero.

So all we need now is a way to express an optimal solution in terms of the flags. I suggest that we want to minimise:

This has two terms. The first is the sum of "one minus the flag" for each pair. The flag is 1 when the points are in the same horizontal group and 0 otherwise. So minimising this value is the same as saying that we want as few horizontal groups as possible. If this was the only constraint then we could set it to zero by making all the F_i 1 - by making all pairs on a row members of the same group.

But the second term stops us from choosing such an extreme solution. It penalises groups with gaps. If a pair are in the same group, but are separated by S_i spaces, then we have a "penalty" of K * S_i.

So we have a trade-off. We want horizontal groups, but we don't want gaps. The final solution will depend on K - if it is large then we won't include any spaces in horizontal groups. But as it is decreased we will start to do so, until when it is very small (tends to zero) we place everything in a row in a single group.

To use this you would choose some K, calculate the S_i, and enter the expression above into a constraint system. The system would then choose F_i to minimise the expression. Finally you would convert the F_i into a pattern of groups by scanning each row as described above and then grouping singletons vertically.

OK, cool. At this point we have a way to express the problem that we can give to a constraint engine.

But it's trivial to solve! We don't need no stinkin' constraint engine to solve this - we can just look at the expression:

The two sums are over the same pairs, so we can move everything into the sum:

And then extract the constant (N here is the total number of pairs):

Now note that each term in the sum is independent (and additive). So for each term, we want the minimum value. We have two options:

What does this mean? It means that for each pair we can simply look at the number of spaces, S_i. If that is greater than 1 / K then the two points should be in separate groups. Otherwise they should be in the same group.

So all this fancy maths and optimisation and constraints and bullshitting comes down to: how far apart are two points in neighbouring pairs? If they are closer than some cut-off, put them in the same horizontal group. Otherwise, put them in separate groups.

So here, finally, is your algorithm:

You can try using cluster module. It contains implementation of K-means clustering algorithm. You can adjust argument of getclusters function to change the number of clusters you want.

Not the answer you're looking for? Browse other questions tagged python algorithm data-mining or ask your own question.

2088
Is there a way to run Python on Android?
1513
What's the canonical way to check for type in Python?
1871
How to determine a Python variable's type?
1961
Determine the type of an object?
2915
List changes unexpectedly after assignment. Why is this and how can I prevent it?
1056
Is there a simple way to delete a list element by value?
1209
Easy interview question got harder: given numbers 1..100, find the missing number(s) given exactly k are missing
1273
Is there a way to create multiline comments in Python?
1161
Ukkonen's suffix tree algorithm in plain English
1767
Image Processing: Algorithm Improvement for 'Coca-Cola Can' Recognition