I have a JMeter test with 2 Thread Groups - the first is a single thread (which creates some inventory) and the second has multiple threads (which purchase all the inventory). I use BeanShell Assertions and XPath Extractors to parse the returned value (which is XML) and store variables (such as the ids of the items to be purchased).

I was not able to do this with variables (since those are local to individual threads). However, I was able to solve this problem with properties!

The ${storeid} was extracted with an XPath Extractor. The BeanShell Assertion does other stuff, like checking that storeid was returned from the previous call, etc.

Anyway, in the second ThreadGroup, I can use the value of the "storeid" property in Samplers with the following:

According to JMeter documentation:

Variables are local to a thread a variable set in one thread cannot be read in another. This is by design. For variables that can be determined before a test starts, see Parameterising Tests (above). If the value is not known until the test starts, there are various options:

Another way to pass variable between the threads is to use jmeter-plugins as mentioned by Andrey Botalov below.

But I found that it is a bit confusing to use it first time but it gives full control of variable during passing from thread to thread. Follow my example with BeanShell usage and you see how easy it is: 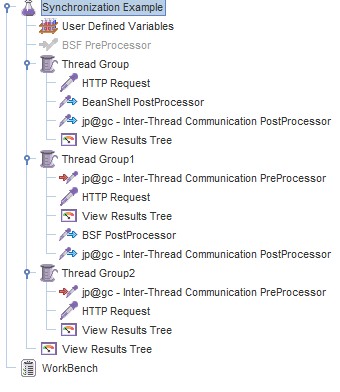 Next referring to sections in picture bellow:

(1.1) Here I created custom variable in User Defined Variables (or you can do it with BSF Proccessor - disabled in this example (1.2))

(3.1) In second thread - variable is taken from queue - with any name you want. But be careful, use wisely Timeout, because this thread will wait til previous finish so it can get modified variable (experiment with some long response)

(3.5) Variable is sent once again in new queue - so provide new name to it

Play, modify, customize to get best result :) Adding more threads can result in unwanted behavior so you need to be watchful.

I found which I believe is the most simple way to get this done.

Set in one Thread Group

to set the variable (http://jmeter.apache.org/usermanual/best-practices.html#bsh_variables)

Get in the other Thread Group

And then from the other thread group, read it via (http://jmeter.apache.org/usermanual/functions.html#__property)

JMeter Plugins has Inter-Thread Communication for this purpose.

There are 2 methods to use it:

In my opinion PostProcessor/PreProcessor is easier to use. 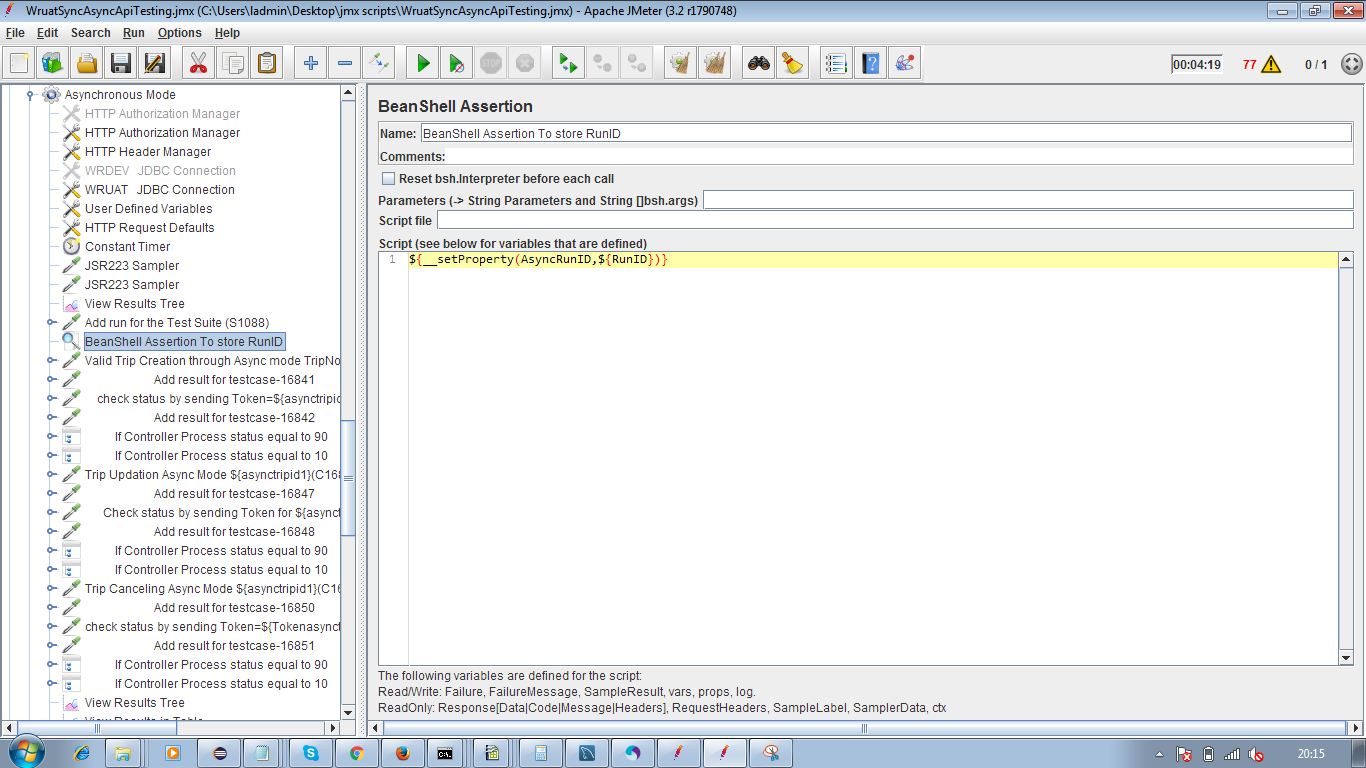 Just add a bean shell assertion use a property function to assign the value to a variable (like a global variable) which will hold the value even after it goes to other thread.

below is the function you need to use to call the stored value:

This is not possible in JMeter, because it is not normal client behavior (sharing parameters between Threads). Instead of this use one Thread-Group with Controllers:

Well this is one way to do it; follow these steps and it will work, later you can adjust it to your needs! Variables are not shared among threads (JMeter calls this a feature probably :) ). But properties are! So set your variable as a propery like so:

1) Click your testplan and enable 'Run Thread Groups consecutively' -> this makes the thread groups run ordered and not randomly. (you can later adjust it, but for now to get it to work..)

2) create a threadgroup called 'setup' for instance; in that thread group add a BeanShell Sampler with the following code:

So now the property has been set! If the value you want to store as a propery is a variable allready (User definded variable or reqex variable for instance) you can do:

3) add a testgroup 'actual test' for instance with a number of threads higher than 1; add a test and to that test add a BeanShell Preprocessor with the following code:

And it will work for each thread, not only just the first thread..

Another solution is to use the Simple Table Server to manage the dataset. This feature was add the 1.2 JMeter Plugins.

Look at the documentation : http://jmeter-plugins.org/wiki/HttpSimpleTableServer/

I checked all the headers everything look like fine .not sure y teardown failed . Any idea plz advice me

Not the answer you're looking for? Browse other questions tagged java testing jmeter beanshell or ask your own question.

2501
How do I call one constructor from another in Java?
2211
How to get an enum value from a string value in Java
863
How to pass an object from one activity to another on Android
6
JMeter | How to define variables such that their scope is in {thread, Thread-Group, Test-Plan} from within BeanShell
3
JMeter - Using Variables from other BeanShell Pre/Post-Processors?
7
How to get value from property in BeanShell (jmeter)
1
JMeter BeanShell Property Setting Across Thread Group
5
How to use JMeter Property props.get props.put from WebDriver Sampler (JMeter)
1
How to keep Thread variables in jmeter when multiple Threads are running in parallel?
0
Jmeter how to modify a variable in BeanShell