How do I calculate square root in Python?

The inputs will probably be all positive integers, and relatively small (say less than a billion), but just in case they're not, is there anything that might break?

Note: This is an attempt at a canonical question after a discussion on Meta about an existing question with the same title.

The math module from the standard library has a sqrt function to calculate the square root of a number. It takes any type that can be converted to float (which includes int) as an argument and returns a float.

The power operator (**) or the built-in pow() function can also be used to calculate a square root. Mathematically speaking, the square root of a equals a to the power of 1/2.

The power operator requires numeric types and matches the conversion rules for binary arithmetic operators, so in this case it will return either a float or a complex number.

(Note: in Python 2, 1/2 is truncated to 0, so you have to force floating point arithmetic with 1.0/2 or similar. See Why does Python give the "wrong" answer for square root?)

This method can be generalized to nth root, though fractions that can't be exactly represented as a float (like 1/3 or any denominator that's not a power of 2) may cause some inaccuracy:

Exponentiation works with negative numbers and complex numbers, though the results have some slight inaccuracy:

Note the parentheses on -25! Otherwise it's parsed as -(25**.5) because exponentiation is more tightly binding than unary negation.

Meanwhile, math is only built for floats, so for x<0, math.sqrt(x) will raise ValueError: math domain error and for complex x, it'll raise TypeError: can't convert complex to float. Instead, you can use cmath.sqrt(x), which is more more accurate than exponentiation (and will likely be faster too):

Both options involve an implicit conversion to float, so floating point precision is a factor. For example:

Let's look at Decimal for example:

Exponentiation fails unless the exponent is also Decimal:

Meanwhile, math and cmath will silently convert their arguments to float and complex respectively, which could mean loss of precision.

Depending on your goal, it might be a good idea to delay the calculation of square roots for as long as possible. SymPy might help.

SymPy is a Python library for symbolic mathematics.

But sympy can give more information than floats or Decimals:

In comparison, floats and Decimals would return a number which is very close to 2 but not equal to 2:

Finally, if a decimal representation is desired, it's possible to ask for more digits than will ever be needed:

For negative reals, it'll return nan, so np.emath.sqrt() is available for that case.

Another option, of course, is to convert to complex first:

Most simple and accurate way to compute square root is Newton's method.

You have a number which you want to compute its square root (num) and you have a guess of its square root (estimate). Estimate can be any number bigger than 0, but a number that makes sense shortens the recursive call depth significantly.

For example we need to find 30's square root. We know that the result is between 5 and 6.

number is 30 and estimate is 5. The result from each recursive calls are:

The last result is the most accurate computation of the square root of number. It is the same value as the built-in function math.sqrt().

This answer was originally posted by gunesevitan, but is now deleted.

The following method takes a positive number x and a number of iterations, and returns upper and lower bounds for the square root of x.

See the reference below for details on this operation's implementation. It also shows how to implement other operations with upper and lower bounds (although there is apparently at least one error with the log operation there).

Alternatively, using Python's math.isqrt, we can calculate a square root to arbitrary precision:

In the foregoing, i or x must be 0 or greater.

Disclaimer: this is for a more specialised use-case. This method might not be practical in all circumstances.

I personally implemented this one for a crypto CTF challenge (RSA cube root attack),where I needed a precise integer value.

The general idea can be extended to any other root.

As @wjandrea have also pointed out, **this example code can NOT compute **. This is a side-effect of the fact that it does not convert anything into floats, so no precision is lost. If the root is an integer, you get that back. If it's not, you get the biggest number whose square is smaller than your number. I updated the code so that it also returns a bool indicating if the value is correct or not, and also fixed an issue causing it to loop infinitely (also pointed out by @wjandrea). This implementation of the general method still works kindof weird for smaller numbers, but above 10 I had no problems with.

Overcoming the issues and limits of this method/implementation:

For smaller numbers, you can just use all the other methods from other answers. They generally use floats, which might be a loss of precision, but for small integers that should mean no problem at all. All of those methods that use floats have the same (or nearly the same) limit from this.

If you still want to use this method and get float results, it should be trivial to convert this to use floats too. Note that that will reintroduce precision loss, this method's unique benefit over the others, and in that case you can also just use any of the other answers. I think the newton's method version converges a bit faster, but I'm not sure.

For larger numbers, where loss of precision with floats come into play, this method can give results closer to the actual answer (depending on how big is the input). If you want to work with non-integers in this range, you can use other types, for example fixed precision numbers in this method too.

Edit 2, on other answers:

Currently, and afaik, the only other answer that has similar or better precision for large numbers than this implementation is the one that suggest SymPy, by Eric Duminil. That version is also easier to use, and work for any kind of number, the only downside is that it requires SymPy. My implementation is free from any huge dependencies if that is what you are looking for.

This variation uses string manipulations to convert a string which represents a decimal floating-point number to an int, calls math.isqrt to do the actual square root extraction, and then formats the result as a decimal string. math.isqrt rounds down, so all produced digits are correct.

The input string, num, must use plain float format: 'e' notation is not supported. The num string can be a plain integer, and leading zeroes are ignored.

Here's a live version running on the SageMathCell server.

find square-root of a number 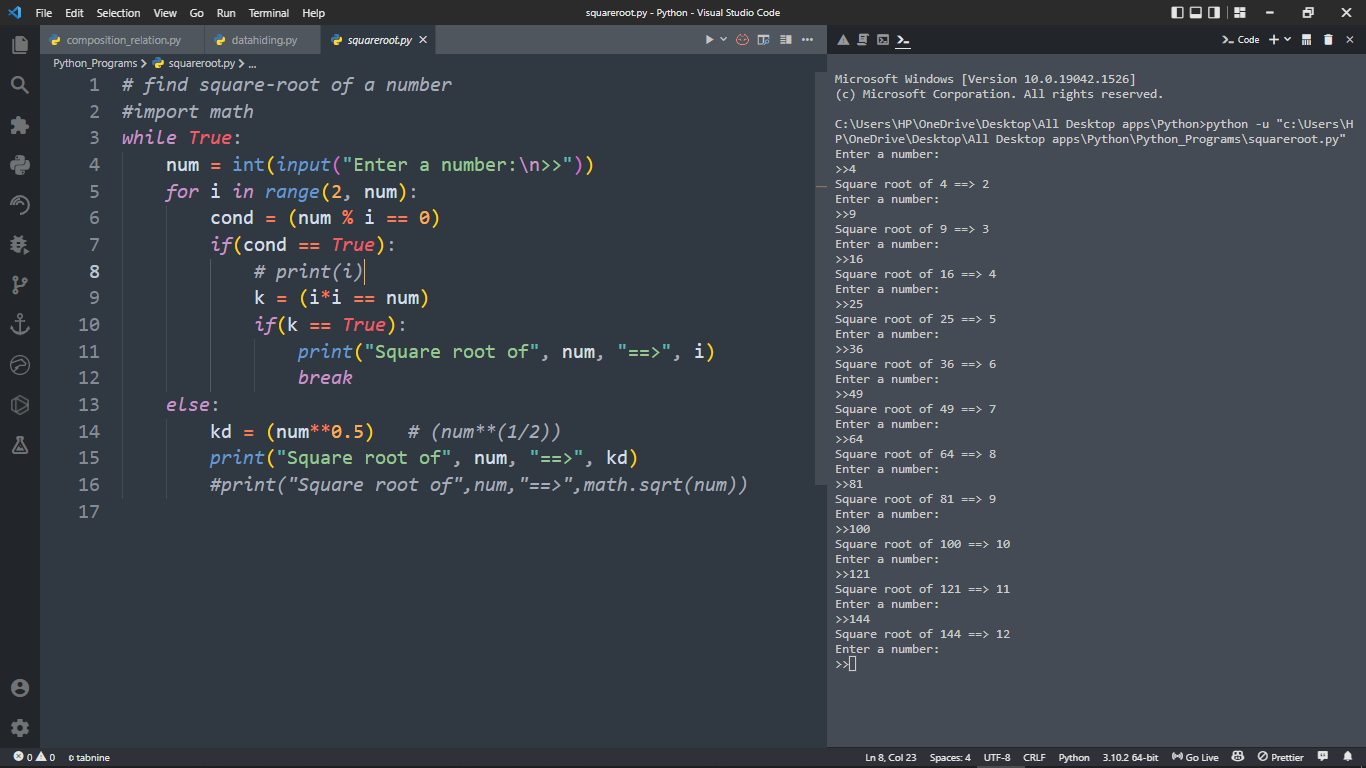 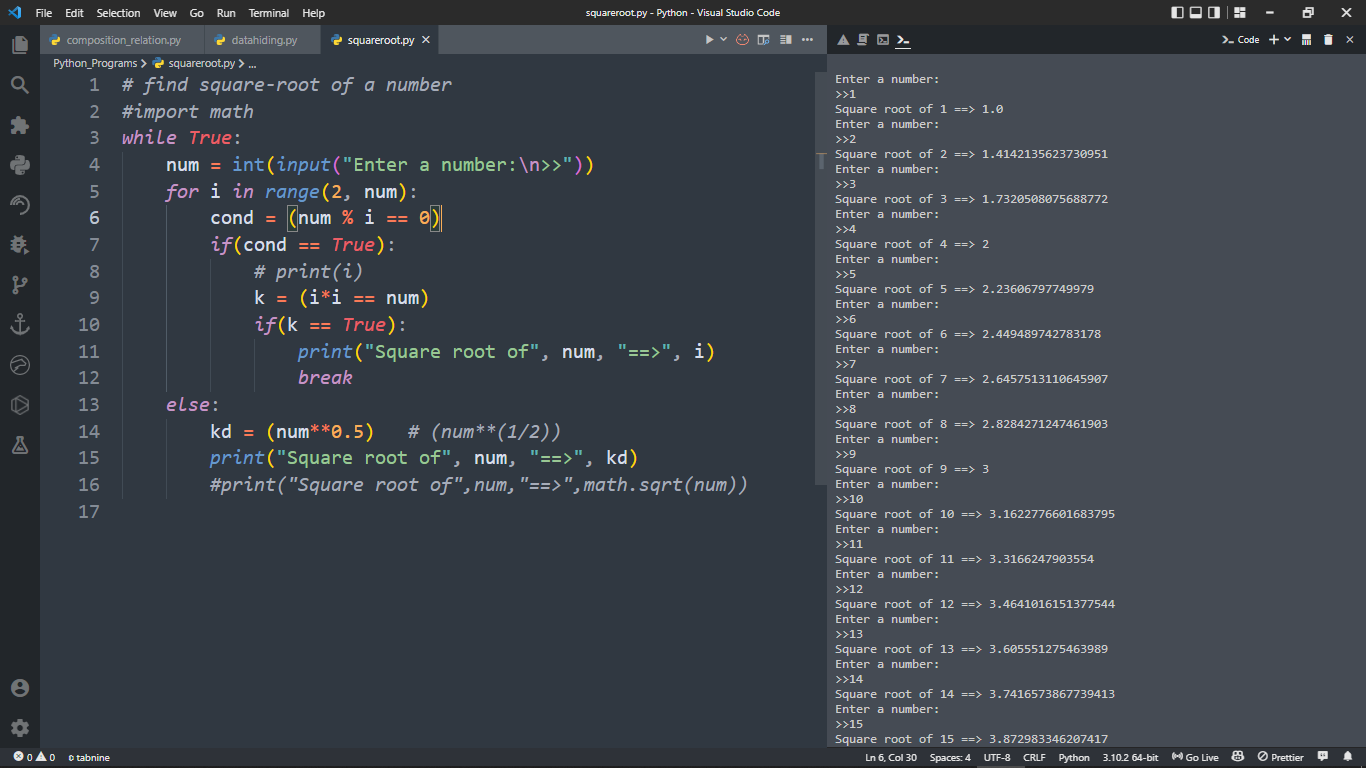 243
Which is faster in Python: x**.5 or math.sqrt(x)?
126
Why does Python give the "wrong" answer for square root? What is integer division in Python 2?
74
Integer square root in python
66
Is there a short-hand for nth root of x in Python?
28
Arbitrary precision of square roots
17
How to find integer nth roots?
11
How can I take the square root of -1 using python?
14
How do I overload `float()` for a custom class?
10
Difference between **(1/2), math.sqrt and cmath.sqrt?
3
Why is math.sqrt() incorrect for large numbers?
See more linked questions

6614
How do I merge two dictionaries in a single expression?
6886
How do I check whether a file exists without exceptions?
5899
How do I execute a program or call a system command?
7110
What are metaclasses in Python?
1766
What's the canonical way to check for type in Python?
1591
Fastest way to determine if an integer's square root is an integer
7622
Does Python have a ternary conditional operator?
3244
How do I concatenate two lists in Python?
2981
How can I access environment variables in Python?
3148
How can I delete a file or folder in Python?