In Java profiling, it seems like all (free) roads nowadays lead to the VisualVM profiler included with JDK6. It looks like a fine program, and everyone touts how you can "attach it to a running process" as a major feature. The problem is, that seems to be the only way to use it on a local process. I want to be able to start my program in the profiler, and track its entire execution.

I have tried using the -Xrunjdwp option described in how to profile application startup with visualvm, but between the two transport methods (shared memory and server), neither is useful for me. VisualVM doesn't seem to have any integration with the former, and VisualVM refuses to connect to localhost or 127.0.0.1, so the latter is no good either. I also tried inserting a simple read of System.in into my program to insert a pause in execution, but in that case VisualVM blocks until the read completes, and doesn't allow you to start profiling until after execution is under way. I have also tried looking into the Eclipse plugin but the website is full of dead links and the launcher just crashes with a NullPointerException when I try to use it (this may no longer be accurate).

Coming from C, this doesn't seem like a particularly difficult task to me. Am I just missing something or is this really an impossible request? I'm open to any kinds of suggestions, including using a different (also free) profiler, and I'm not averse to the command line.

Consider using HPROF and opening the data file with a tool like HPjmeter - or just reading the resulting text file in your favorite editor.

HPROF is capable of presenting CPU usage, heap allocation statistics, and monitor contention profiles. In addition, it can also report complete heap dumps and states of all the monitors and threads in the Java virtual machine.

The best way to solve this problem without modifying your application, is to not use VisualVM at all. As far as other free options are concerned, you could use either Eclipse TPTP or the Netbeans profiler, or whatever comes with your IDE.

If you can modify your application, to suspend it's state while you setup the profiler in VisualVM, it is quite possible to do so, using the VisualVM Eclipse plugin. I'm not sure why you are getting the NullPointerException, since it appears to work on my workstation. You'll need to configure the plugin by providing the path to the jvisualvm binary and the path of the JDK; this is done by visiting the VisualVM configuration dialog at Windows -> Preferences -> Run/Debug - > Launching -> VisualVM Configuration (as shown in the below screenshot). 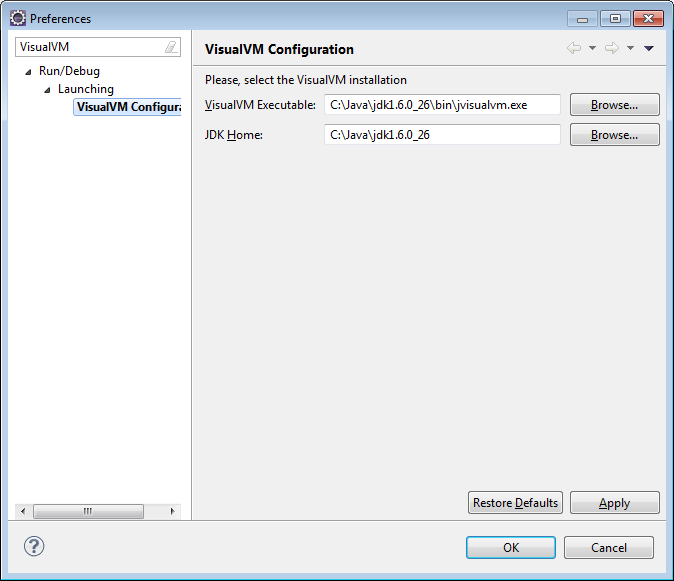 You'll also need to configure your application to start with the VisualVM launcher, instead of the default JDT launcher.

All application launches from Eclipse, will now result in VisualVM tracking the new local JVM automatically, provided that VisualVM is already running. If you do not have VisualVM running, then the plugin will launch VisualVM, but it will also continue running the application.

Inferring from the previous sentence, it is evident that having the application halt in the main() method before performing any processing is quite useful. But, that is not the main reason for suspending the application. Apparently, VisualVM or its Eclipse plugin does not allow for automatically starting the CPU or memory profilers. This would mean that these profilers would have to be started manually, thereby necessitating the need to suspend the application.

Additionally, it is worth noting that adding the flags: -Xrunjdwp:transport=dt_socket,address=8000,server=y,suspend=y to the JVM startup will not help you in the case of VisualVM, to suspend the application and setup up the profilers. The flags are meant to help you in the case of profilers that can actually connect to the open port of the JVM, using the JDWP protocol. VisualVM does not use this protocol and therefore you would have to connect to the application using JDB or a remote debugger; but that would not resolve the problem associated with profiler configuration, as VisualVM (at least as of Java 6 update 26) does not allow you to configure the profilers on a suspended process as it simply does not display the Profiler tab.

This is now possible with the startup profiler plugin to VisualVM.

The advice with -Xrunjdwp is incorrect. It just enables debugger and with suspend=y it waits for debugger to attach. Since VisualVM is not debugger, it does not help you. However inserting System.in or Thread.sleep() will pause the startup and allows VisualVM to attach to your application. Be sure to read Profiling with VisualVM 1 and Profiling with VisualVM 2 to better understand profiler settings. Note also that instead of profiling, you can use 'Sampler' tab in VisualVM, which is more suitable for profiling entire java program execution. As other mentioned you can also use NetBeans Profiler, which directly support profiling of the application startup.

Not the answer you're looking for? Browse other questions tagged java profile visualvm or ask your own question.

57
how to profile application startup with visualvm
8
How do I automatically attach JVisualVM to a short-lived program?

4034
What are the differences between a HashMap and a Hashtable in Java?
7200
Is Java "pass-by-reference" or "pass-by-value"?
3627
How do I efficiently iterate over each entry in a Java Map?
3398
What is the difference between public, protected, package-private and private in Java?
4236
Avoiding NullPointerException in Java
4399
How do I read / convert an InputStream into a String in Java?
3359
When to use LinkedList over ArrayList in Java?
3792
How do I generate random integers within a specific range in Java?
3270
How do I convert a String to an int in Java?
3484
How can I create a memory leak in Java?