In Xcode (Version 13.2.1 (13C100) and the latest beta, Version 13.3 beta (13E5086k)), trying to login to my Apple ID results in the error, Unexpected nil property at path: 'Provider/attributes/developerTeamId'. Has anyone got a solution to this? 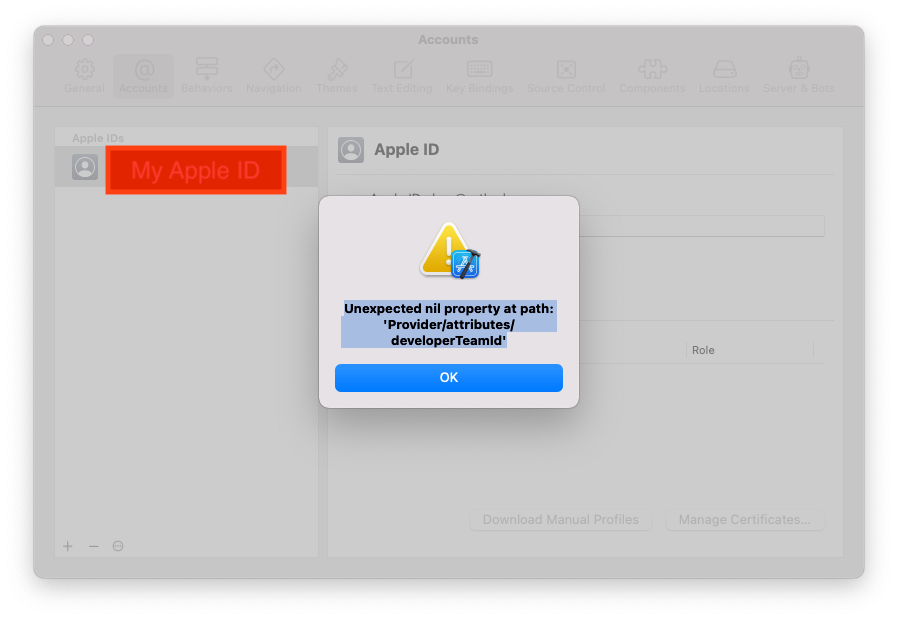 Apple has fixed the issue

Apple has fixed the issue, you don't need to update Xcode, since it was an issue in their backend. I've emailed the Apple developer support as this seems to not be an isolated issue. Trying the latest beta of Xcode, Version 13.3 beta (13E5086k) did not solve it. This seems to have happened 1 year ago as well.

I've noticed that this only happens to me if my Apple developer account belongs to multiple teams. So I left all the teams except 1 in my alternative Apple ID.

Scroll all the way down, and click "Leave Team". You need to leave all the teams except the one you're working on. Obviously, you'll need an invite later to work on those teams again.

Alternatively, create a new Apple ID and invite that one to the team you need to develop for. Fortunately for us, Apple only broke Xcode, and not developer.apple.com. 😅However, you'll need an Organization team, not an individual team.

Have the same problem. I had mac In Xcode (Version 13.0 (13A233)),(MacOS BigSur 11.6 (20G165))when i trying to upload my app to Test Flight . I think if your apple developer account have multiple team id,May be Xcode unable to find correct app id. I found one solution i install transporter app and login through any apple id and select team id export your app and add .ipa file . Hola it works

After writing to feedbackasistant the problem was fixed for me.

Not the answer you're looking for? Browse other questions tagged xcode or ask your own question.

18
xcode app submission error: "no eligible software found, make sure this software is owned by your developer organization"
7
How can I fold blocks of comments in Swift using Xcode the way I do it in Visual Studio?
78
Xcode 7 ERROR ITMS-90474: "Invalid Bundle", can't submit to Apple
61
How to manage Personal Team info on Apple Developer website?
272
Xcode 10: A valid provisioning profile for this executable was not found
0
Is ISO8601DateFormatter broken in iOS14 and MacOS 11?