Choosing DB model for an app similar to Notion, Block-based ("paragraphs") or document-based?

Lately, it seems that many note managers with "infinite" tree structure are choosing a block model (where each paragraph is an entry in the DB), instead of a document or file model.

If you find any errors in the table, please let me know.

We have been developing an app very similar to Notion for 8 months now, also using the block model, but we are considering making a radical change and switching to the document model. The structure of our blocks in MongoDB currently looks like this:

Many pages talk about the differences of both approaches (example) although in a very vague way, so we decided to open this thread to find a more scientific answer to the question.

Features of our app

Our app has two types of "blocks". The page type (which, like in Notion, can be inserted into any note and generate a document "inside" the current document), and the rest of the blocks, which are equivalent to the "toggle" block type in Notion (i.e. they can be collapsed or their nested children can be expanded).

2. What we have tried

In trying to answer our question (which DB model would work best for our application), we've realized that the answer is probably "it depends". Perhaps both models have strengths or weaknesses in different types of operations or situations. That is why we formulated this comparison table describing how we believe the performance of both models would be for each of these operations.

*Render very large documents: Most users probably do not use notes larger than 250 kb (considering that multimedia files are referenced in a separate collection). Still, in the document model, the question arises: how can we load, render or edit large documents in manageable chunks? One idea we came up with is to split HTML documents that reach large dimensions into portions of a certain size in kb, instead of splitting them into paragraphs. (It would be like a kind of Gridfs that allows you to modify the file in parts.) Could this be a good idea?

**Should the DOM be nested? In order to be able to collapse or expand nested child paragraphs, note managers with a block model structure the DOM in a nested way (paragraphs are in divs, inside their parent divs, etc.). However, an alternative in the document model could be that when the user presses tab, only that block (HTML tag such as <p> or <li>) is assigned an attribute with a number less than or equal to 1, representing the nesting levels relative to the previous block. This way when you press tab to nest or shift-tab to un-nest, you only have to modify one attribute of an HTML element instead of many elements; and the DOM stays simple, without having nested blocks.

We believe that for each of the rows in the comparison table, benchmarks could be done measuring the performance of both models. Other people have done something similar here and here, comparing the performance of note managers using both models. The problem with those tests is that it is difficult to draw an accurate conclusion about the goodness of both models. Obsidian uses documents locally, so you don't have to sync notes. Roam Research is a very new and poorly optimized app. Standard Notes encrypts notes locally. In other words, it's not always apples to apples.

And even if tests could be done, we believe that the answer may even depend on how each user uses the application. Suppose user A usually organizes his notes in long documents using paragraph nesting (to collapse or expand them). On the other hand user B usually organizes his notes by creating new documents within documents. It is likely that a block model based manager would work better for user A while a document based one would work better for B.

So, we tried to push our doubt as far as we could, but we are still not sure of the answer Which of the two models do you think would offer better performance for our app and why?

I just found some very interesting information. It seems that both TinyMCE and CKEditor (up to version 4), the view and the model converge with the HTML being based on content-editable. However, CKEditor 5 switched to MVC [source 1], [source 2]. 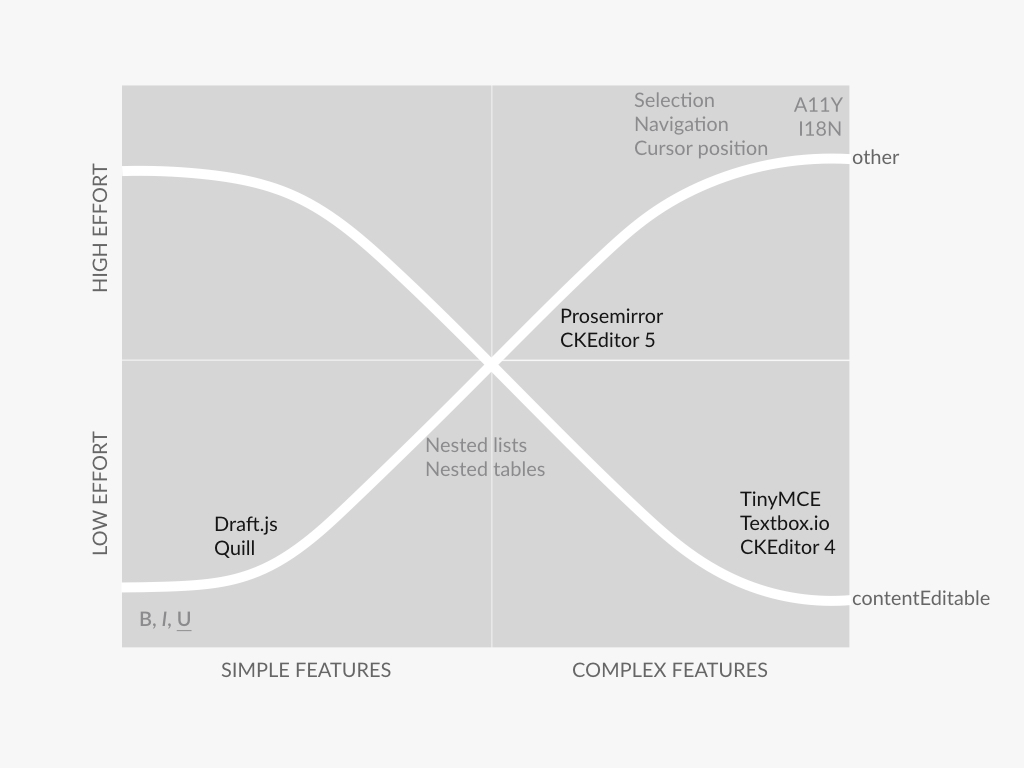 I've done a short test pasting a large clipboard of a few MB in TinyMCE 5, CKEditor 4 and CKEditor 5, and the latter has been a bit slower. I hope soon to be able to do more tests with other things like dragging blocks or rendering large documents.

In a GitHub thread about CKEditor 5's performance when working with large documents, one of the contributors said "It works slower than the native content-editable element obviously, but the typing experience is pretty well".

Looks like you've done your homework. Database modeling is sometimes a bit of an art rather than a science. I think that with both models, you can achieve good performance if you optimize them well. So I would recommend that you go for the one that requires less work. Since you've been working on the block model for 8 months already, that's probably the best option for you.

Love how thorough you thought about the design of your application. I just want to add some suggestions you might look:

You seem to be making your choice based on what is easier to model or develop.

If you intend to compete in this increasingly crowded market, you need to consider what will give you an edge, and what will be sustainable in the long run.

Two of the main issues Evernote (longtime user and former employee) faced were:

On the other hand, block-based tools usually have really bad web clippers, because it's very hard to go from HTML to blocks.

Solve some of these hard problems!

4
How to perform Update operations in GridFS (using Java)?