Is there anyway to import a regular CSS file with Sass's @import command? While I'm not using all of the SCSS syntax from sass, I do still enjoy it's combining/compressing features, and would like to be able to use it without renaming all of my files to *.scss

After having the same issue, I got confused with all the answers here and the comments over the repository of sass in github.

I just want to point out that as December 2014, this issue has been resolved. It is now possible to import css files directly into your sass file. The following PR in github solves the issue.

The syntax is the same as now - @import "your/path/to/the/file", without an extension after the file name. This will import your file directly. If you append *.css at the end, it will translate into the css rule @import url(...).

In case you are using some of the "fancy" new module bundlers such as webpack, you will probably need to use use ~ in the beginning of the path. So, if you want to import the following path node_modules/bootstrap/src/core.scss you would write something like
@import "~bootstrap/src/core".

NOTE:
It appears this isn't working for everybody. If your interpreter is based on libsass it should be working fine (checkout this). I've tested using @import on node-sass and it's working fine. Unfortunately this works and doesn't work on some ruby instances.

To cut the long story short, the syntax in next:

And it is damn good: this syntax is elegant and laconic, plus backward compatible! It works excellently with libsass and node-sass.

To avoid further speculations in comments, writing this explicitly: Ruby based Sass still has this feature unimplemented after 7 years of discussions. By the time of writing this answer, it's promised that in 4.0 there will be a simple way to accomplish this, probably with the help of @use. It seems there will be an implementation very soon, the new "planned" "Proposal Accepted" tag was assigned for the issue #556 and the new @use feature.

answer might be updated, as soon as something changes.

Looks like this is unimplemented, as of the time of this writing:

For libsass (C/C++ implementation), import works for *.css the same way as for *.scss files - just omit the extension:

See this answer for further details.

You must prepend an underscore to the css file to be included, and switch its extension to scss (ex: _yourfile.scss). Then you just have to call it this way:

And it will include the contents of the file, instead of using the CSS standard @import directive.

Now, importing a CSS file is as easy as:

If you have a .css file which you don't wish to modify, neither change its extension to .scss (e.g. this file is from a forked project you don't maintain), you can always create a symlink and then import it into your .scss.

Your target output .css file is going to hold contents from imported symlink .scss file, not a CSS import rule (mentioned by @yaz with highest comment votes). And you don't have duplicated files with different extensions, what means any update made inside initial .css file immediately gets imported into your target output.

Symbolic link (also symlink or soft link) is a special type of file that contains a reference to another file in the form of an absolute or relative path and that affects pathname resolution.
– http://en.wikipedia.org/wiki/Symbolic_link

You can use a third-party importer to customise @import semantics.

node-sass-import-once, which works with node-sass (for Node.js) can inline import CSS files.

Note that node-sass-import-once cannot currently import Sass partials without an explicit leading underscore. For example with the file partials/_partial.scss:

In general, be aware that a custom importer could change any import semantics. Read the docs before you start using it.

If you don't do that sass will use the css @import which is something you don't want.

I figured out an elegant, Rails-like way to do it. First, rename your .scss file to .scss.erb, then use syntax like this (example for highlight_js-rails4 gem CSS asset):

Why you can't host the file directly via SCSS:

Doing an @import in SCSS works fine for CSS files as long as you explicitly use the full path one way or another. In development mode, rails s serves assets without compiling them, so a path like this works...

...because the hosted path is literally /assets/highlight_js/github.css. If you right-click on the page and "view source", then click on the link for the stylesheet with the above @import, you'll see a line in there that looks like:

How this solution works:

Firstly, by moving the .scss file to .scss.erb, we have effectively turned the SCSS into a template for Rails. Now, whenever we use <%= ... %> template tags, the Rails template processor will replace these snippets with the output of the code (just like any other template).

This also means that the SCSS engine isn't even parsing the CSS file; it's just hosting a link to it! So there's no hokey monkey patches or gross workarounds. We're serving a CSS asset via SCSS as intended, and using a URL to said CSS asset as Rails intended. Sweet!

To import a regular CSS file into Sass: 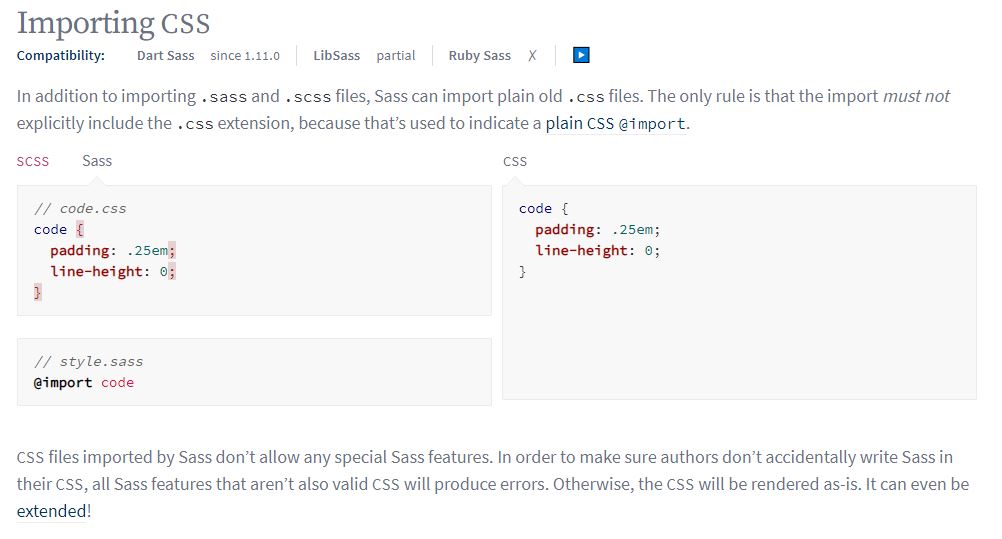 All, or nearly all css file can be also interpreted as if it would be scss. It also enables to import them inside a block. Rename the css to scss, and import it so.

In my actual configuration I do the following:

First I copy the .css file into a temporary one, this time with .scss extension. Grunt example config:

Then you can import the .scss file from your parent scss (in my example, it is even imported into a block):

Note: this could be dangerous, because it will effectively result that the css will be parsed multiple times. Check your original css for that it contains any scss-interpretable artifact (it is improbable, but if it happen, the result will be hard to debug and dangerous).

to Import css file in to scss simply use the this: @import "src/your_file_path"; without using extension .css at the end

It is now possible using:

I can confirm this works:

11
Sass, Compass, compile all CSS file to one
19
How to merge .CSS files with Sass (or other tool)?
7
Can compass merge .css files?
8
@import with Sass not combining files
2
How does one @import bootstrap.css and @extend bootstrap class selectors?
2
Rails Asset Pipeline with sass @imports
0
Import a css file?
0
How do I make the Sass Importer combine files into one stylesheet?
0
Compass/SASS: extend imported bootstrap class
309
How to add font-awesome to Angular 2 + CLI project
See more linked questions

3639
Set cellpadding and cellspacing in CSS?
3973
Is there a CSS parent selector?
4312
Change a HTML5 input's placeholder color with CSS
2754
How can I transition height: 0; to height: auto; using CSS?
2401
What's the difference between SCSS and Sass?
457
Sass .scss: Nesting and multiple classes?
1758
Hide scroll bar, but while still being able to scroll
1817
Sass Variable in CSS calc() function
3126
Is it possible to apply CSS to half of a character?