How to match "anything up until this sequence of characters" in a regular expression?

Take this regular expression: /^[^abc]/. This will match any single character at the beginning of a string, except a, b, or c.

If you add a * after it – /^[^abc]*/ – the regular expression will continue to add each subsequent character to the result, until it meets either an a, or b, or c.

...In other words, how can I match everything up to (but not including) the exact sequence "abc"?

You didn't specify which flavor of regex you're using, but this will work in any of the most popular ones that can be considered "complete".

The .+? part is the un-greedy version of .+ (one or more of anything). When we use .+, the engine will basically match everything. Then, if there is something else in the regex it will go back in steps trying to match the following part. This is the greedy behavior, meaning as much as possible to satisfy.

When using .+?, instead of matching all at once and going back for other conditions (if any), the engine will match the next characters by step until the subsequent part of the regex is matched (again if any). This is the un-greedy, meaning match the fewest possible to satisfy.

Following that we have (?={contents}), a zero width assertion, a look around. This grouped construction matches its contents, but does not count as characters matched (zero width). It only returns if it is a match or not (assertion).

Match any characters as few as possible until a "abc" is found, without counting the "abc".

If you're looking to capture everything up to "abc":

( ) capture the expression inside the parentheses for access using $1, $2, etc.

.* match anything, ? non-greedily (match the minimum number of characters required) - [1]

[1] The reason why this is needed is that otherwise, in the following string:

In your particular case, it can be solved by a positive look ahead: .+?(?=abc)

A picture is worth a thousand words. See the detail explanation in the screenshot. 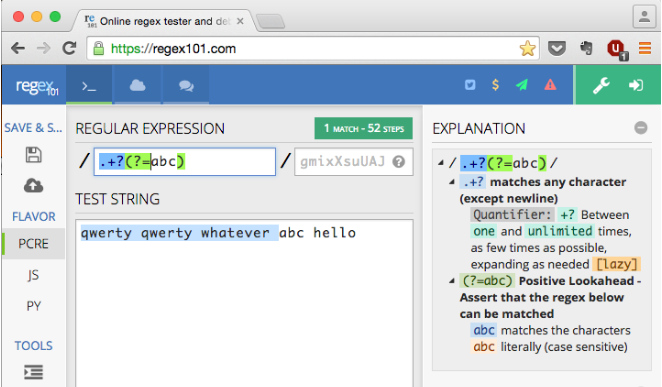 Be aware that [abc] isn't the same as abc. Inside brackets it's not a string - each character is just one of the possibilities. Outside the brackets it becomes the string.

For regex in Java, and I believe also in most regex engines, if you want to include the last part this will work:

For example, in this line:

select all characters until "abc" and also include abc

using our regex, the result will be: I have this very nice senabc

I ended in this stackoverflow question after looking for help to solve my problem but found no solution to it :(

So I had to improvise... after some time I managed to reach the regex I needed:

Text version for copy-paste (change 'grp-bps' for your text):

[^]+?(?=abc) does not work, since python doesn't recognize [^] as valid regex. To make multiline matching work, you'll need to use the re.DOTALL option, for example:

This will make sense about regex.

Here, we can get the exact word globally which is belonging inside the double quotes. For Example, If our search text is,

This is the example for "double quoted" words

then we will get "double quoted" from that sentence.

everything up to (but not including) the exact sequence "abc"

\S means any non-whitespace character; i.e. opposite to \s

Together [\s\S] means any character. This is almost the same as . except that . doesn't match newline.

* means 0+ occurrences of the preceding token. I've used this instead of + in case the source string starts with abc.

(?= is known as positive lookahead. It requires a match to the string in the parentheses, but stops just before it, so (?=abc) means "up to but not including abc, but abc must be present in the source string".

? between [\s\S]* and (?=abc) means lazy (aka non greedy). i.e. stop at the first abc. Without this it would capture every character up to the final occurrence of abc if abc occurred more than once.

I would like to extend the answer from @sidyll for the case insensitive version of the regex.

If you want to match abc/Abc/ABC... case insensitively which I needed to do use the following regex.

All other explanation of the regex remains same as @sidyll pointed out.

This part is From grep manual:

The $ marks the end of a string, so something like this should work: [[^abc]*]$ where you're looking for anything NOT ENDING in any iteration of abc, but it would have to be at the end

Also if you're using a scripting language with regex (like php or js), they have a search function that stops when it first encounters a pattern (and you can specify start from the left or start from the right, or with php, you can do an implode to mirror the string).

0
Remove last character from regex match
0
Regular Expression (\S+?) vs (\S+))
0
How to turn a regex to non-greedy
450
Non greedy (reluctant) regex matching in sed?
52
Reference - What does this regex mean?
18
How can I strip the data:image part from a base64 string of any image type in Javascript
5
Extract first sentence in string
5
JSX Component + dangerouslySetInnerHTML?
2
Split txt file into multiple new files with regex
2
How to match everything up to double newline "\n\n" using regex in Python?
See more linked questions