How do I create a jar distributable for javadocs?

I've created an API that I release as a JAR file. It's proprietary so I had to strip the source files out of it.

I currently include a separate /doc folder which contains the output of Eclipse's export-to-javadoc wizard. Not bad, but I'd like to go one step further.

I'd like to distribute the javadocs as a jar file that can be easily dropped into a future project which includes the jar file for my API. I know I've seen it done this way several times with other distributions I've used, but I haven't had any luck searching.

End goal is to allow future developers to have easy access to hover over comments and things of that nature.

It seems it is enough to package the doc folder containing the eclipse generated documentation as a jar file. Then if you want to use that jar as javadocs of the actual jar containing the compiled .class files, you assign the javadoc jar with the "Javadoc in archive" in Eclipse and set the Path within archive as doc. It seems Eclipse looks for index.html and package-list entries in the doc folder. 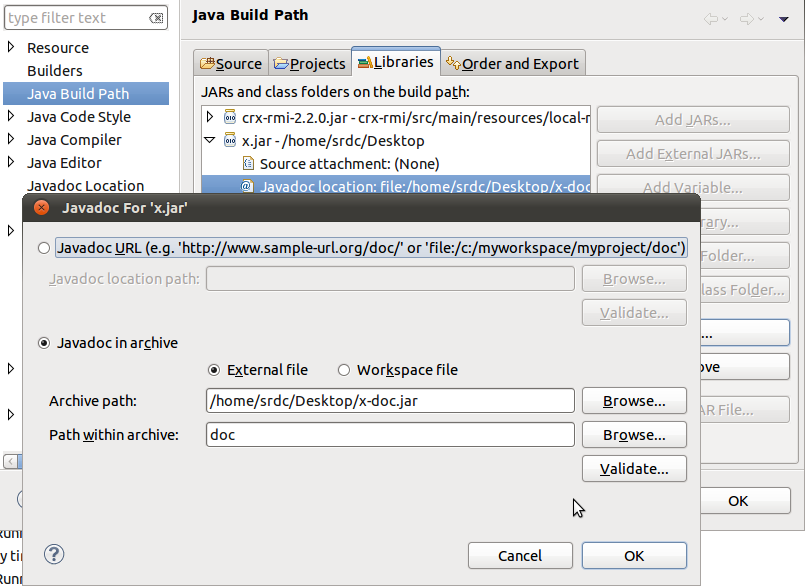 Also using maven-javadoc-plugin may an easy way to do this. See the link below:

If your end goal is just for the future developers to be able to view your javadoc instructions when they are using your classes or methods, in Eclipse you can have option to export java source files when you export your jar library as shown in the image below: 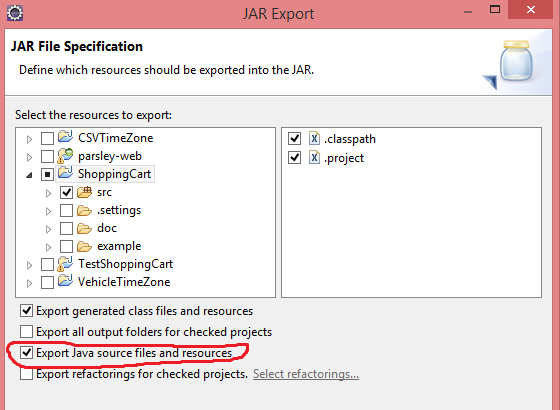 This also allows developers to step in and view your codes while debugging.

Not the answer you're looking for? Browse other questions tagged java jar javadoc or ask your own question.

253
How to attach javadoc or sources to jars in libs folder?
3
How would you export Javadoc as a .jar file in Eclipse?
1
Export project to jar file including javadoc

3169
How do I efficiently iterate over each entry in a Java Map?
3477
Create ArrayList from array
3929
How do I read / convert an InputStream into a String in Java?
3407
How do I generate random integers within a specific range in Java?
2314
How can I create an executable JAR with dependencies using Maven?
730
Linking to an external URL in Javadoc?
2924
How do I convert a String to an int in Java?
818
How to reference a method in javadoc?
3128
How to create a memory leak in Java?
895
Can't execute jar- file: “no main manifest attribute”