Why does Clojure have 5 ways to define a class instead of just one?

Clojure has gen-class, reify, proxy and also deftype and defrecord to define new class-like datatypes. For a language that values syntactic simplicity and abhors unnecessary complexity, it seems like an aberration. Could someone explain why it is so? Could Common Lisp-style defclass have sufficed?

This is a mix of three different factors:

So first, let's consider what these do. deftype and gen-class are similar in that they both define a named class for ahead-of-time compilation. Gen-class came first, followed by deftype in clojure 1.2. Deftype is preferred, and has better performance characteristics, but is more restrictive. A deftype class can conform to an interface, but cannot inherit from another class.

Reify and proxy are both used to dynamically create an instance of an anonymous class at runtime. Proxy came first, reify came along with deftype and defrecord in clojure 1.2. Reify is preferred, just as deftype is, where the semantics are not too restrictive.

That leaves the question of why both deftype and defrecord, since they appeared at the same time, and have a similar role. For most purposes, we will want to use defrecord: it has all the various clojure goodness that we know and love, sequability and so forth. Deftype is intended for use as a low level building block for the implementation of other datastructures. It doesn't include the regular clojure interfaces, but it does have the option of mutable fields (though this isn't the default).

For further reading check out:

The google group thread where deftype and reify were introduced

The short answer is that they all have different and useful purposes. The complexity is due to the need to interoperate effectively with different features of the underlying JVM.

If you don't need any Java interop then 99% of the time you are best off sticking with either defrecord or a simple Clojure map.

If your needs are more complex, then the following flowchart is a great tool for explaining why you would choose one of these options over the others: 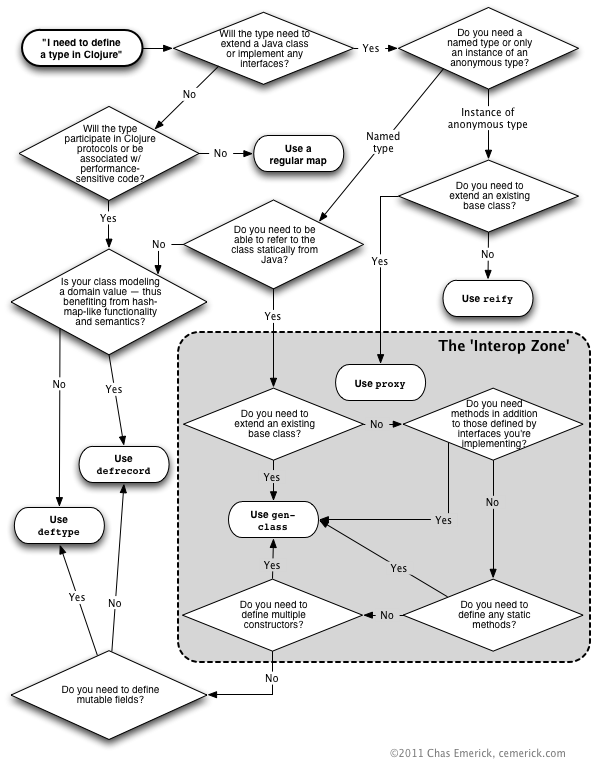 Not the answer you're looking for? Browse other questions tagged clojure clojure-java-interop or ask your own question.

1
On Clojure, what is the difference of deftype and defrecord and why are they necessary beyound maps?

4
Trouble understanding :state in Clojure
133
Why does Clojure have “keywords” in addition to “symbols”?
22
How does clojure class reloading work?
4
How to use Clojure proxy to make a java-like class?
2
Clojure — how to define public mutable members using deftype?
1
can I define a java interface in Clojure?
0
Java interface to Clojure with proxy
0
Clojure proxy implementing abstract class with protected constructor
0
How to use defrecord in Clojure to extend a Java class?