What does it mean by select 1 from table?

I have seen many queries with something as follows.

What does this 1 mean, how will it be executed and, what will it return?

Also, in what type of scenarios, can this be used?

SELECT 1 FROM TABLE_NAME means, "Return 1 from the table". It is pretty unremarkable on its own, so normally it will be used with WHERE and often EXISTS (as @gbn notes, this is not necessarily best practice, it is, however, common enough to be noted, even if it isn't really meaningful (that said, I will use it because others use it and it is "more obvious" immediately. Of course, that might be a viscous chicken vs. egg issue, but I don't generally dwell)).

Basically, the above will return everything from table 1 which has a corresponding ID from table 2. (This is a contrived example, obviously, but I believe it conveys the idea. Personally, I would probably do the above as SELECT * FROM TABLE1 T1 WHERE ID IN (SELECT ID FROM TABLE2); as I view that as FAR more explicit to the reader unless there were a circumstantially compelling reason not to).

There actually is one case which I forgot about until just now. In the case where you are trying to determine existence of a value in the database from an outside language, sometimes SELECT 1 FROM TABLE_NAME will be used. This does not offer significant benefit over selecting an individual column, but, depending on implementation, it may offer substantial gains over doing a SELECT *, simply because it is often the case that the more columns that the DB returns to a language, the larger the data structure, which in turn mean that more time will be taken.

select 1 from table will return the constant 1 for every row of the table. It's useful when you want to cheaply determine if record matches your where clause and/or join.

then it's a myth that the 1 is better than

it does what it says - it will always return the integer 1. It's used to check whether a record matching your where clause exists.

The result is 1 for every record in the table. 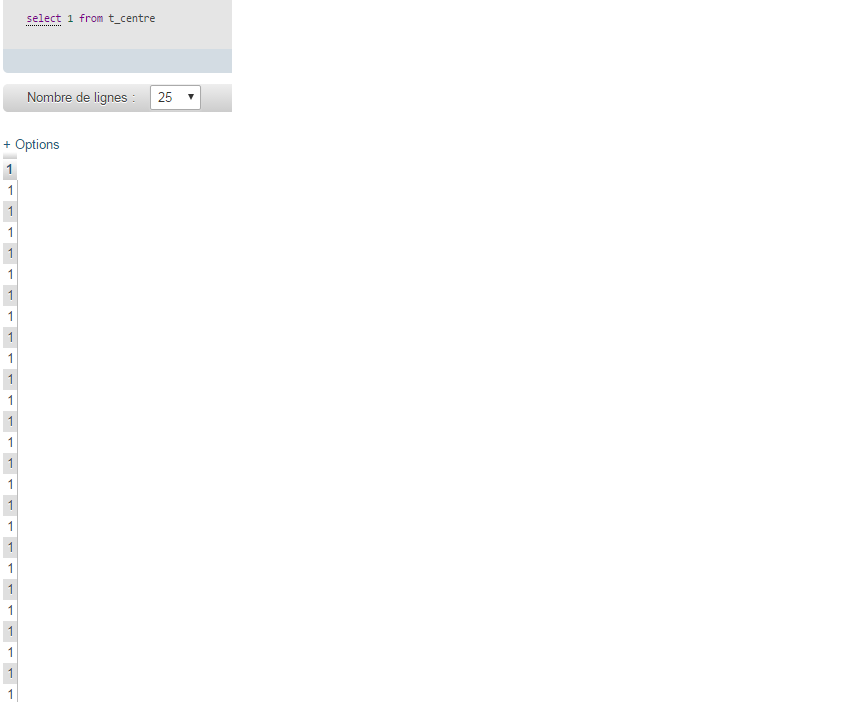 Although it is not widely known, a query can have a HAVING clause without a GROUP BY clause.

In such circumstances, the HAVING clause is applied to the entire set. Clearly, the SELECT clause cannot refer to any column, otherwise you would (correct) get the error, "Column is invalid in select because it is not contained in the GROUP BY" etc.

Therefore, a literal value must be used (because SQL doesn't allow a resultset with zero columns -- why?!) and the literal value 1 (INTEGER) is commonly used: if the HAVING clause evaluates TRUE then the resultset will be one row with one column showing the value 1, otherwise you get the empty set.

Example: to find whether a column has more than one distinct value:

To be slightly more specific, you would use this to do

because you don't care about looking at the results. Asking for the number 1 is very easy for the database (since it doesn't have to do any look-ups).

If you don't know there exist any data in your table or not, you can use following query:

So, we use this SQL query to know if there is any data in the table & the number of rows indicates how many rows exist in this table.

If you just want to check a true or false based on the WHERE clause, select 1 from table where condition is the cheapest way.

This means that You want a value "1" as output or Most of the time used as Inner Queries because for some reason you want to calculate the outer queries based on the result of inner queries.. not all the time you use 1 but you have some specific values...

This will statically gives you output as value 1.

I see it is always used in SQL injection,such as:

These numbers can be used to guess where the database exists and guess the column name of the database you specified.And the values of the tables.

The reason is another one, at least for MySQL. This is from the MySQL manual

InnoDB computes index cardinality values for a table the first time that table is accessed after startup, instead of storing such values in the table. This step can take significant time on systems that partition the data into many tables. Since this overhead only applies to the initial table open operation, to “warm up” a table for later use, access it immediately after startup by issuing a statement such as SELECT 1 FROM tbl_name LIMIT 1

This is just used for convenience with IF EXISTS(). Otherwise you can go with

Image In the case of 'IF EXISTS', we just need know that any row with specified condition exists or not doesn't matter what is content of row.

above example code, returns no. of rows equals to no. of users with 1 in single column

Not the answer you're looking for? Browse other questions tagged mysql sql plsql or ask your own question.

4932
What is the difference between “INNER JOIN” and “OUTER JOIN”?
1041
SQL update from one Table to another based on a ID match
1348
Can I concatenate multiple MySQL rows into one field?
1002
When should I use CROSS APPLY over INNER JOIN?
943
How to 'insert if not exists' in MySQL?
3954
How do I UPDATE from a SELECT in SQL Server?
2126
Finding duplicate values in a SQL table
1419
What are the options for storing hierarchical data in a relational database?
2342
How do I import an SQL file using the command line in MySQL?