I'm using the Progress OpenEdge ODBC driver (peoe27.dll v07.16.0175) to push data into an OpenEdge database. I had a situation where a user put in a string value that was 54 characters long, which got rejected during the update because it exceeded the defined column size of 50, as visible in the second image below.

The legacy system admin then sent me a screen shot showing that, as far as ABL was concerned, the width on that same column in that same table was 200 characters. (see the first image)

Anyone have an explanation? (Other than that ABL and OpenEdge ODBC are a terrible platform... :P ) 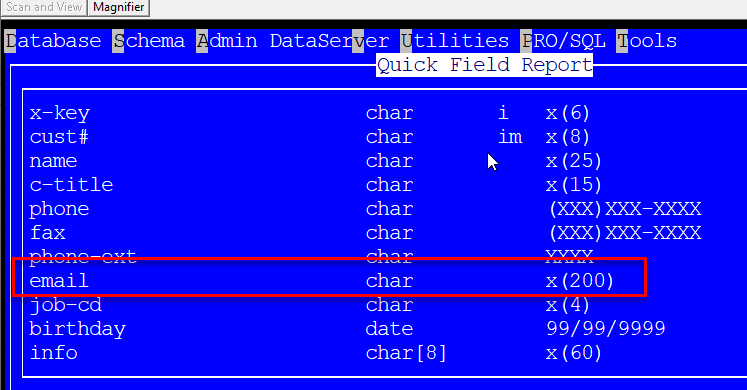 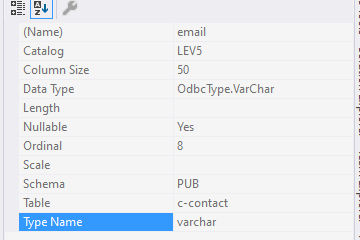 Legacy DB admin found the answer. Seems there are ways to change the schema of an OpenEdge table that does not get "published" in such a way that external requesters can see it.

Apparently there is a "dbtool utility in dlc" that can scan and fix this. He researched it and did just that.

If you're reading this with similar issues and the above isn't enough to get you past, PM and I'll get more details.

355
Altering column size in SQL Server
1
SUBSTRING with WHERE clause in MSDASQL causes error
4
How can you connect to a ProgressDB data provider with Dapper?
0
Why information about lock appears so late, after 5-6 seconds?
0
Issues connecting to Progress database via ODBC in published Web Application
0
How to determine the largest length of Progress OpenEdge ABL fields
1
Progress-ODBC-TSQL CASE Statement for Dynamic Column is Truncating Data
1
How do I decrease the time it takes for a Progress OpenEdge OdbcCommand using ReadCommitted transaction to report a lock in C#?