I have a TTreeView component I use to display the hierarchical structure in a form and I'd like to be able to select some components and "manipulate" them e.g. clicking a button to move them.

My problem is as soon as I click the button the selected objects vanish.

I've seen that in the TCustomTreeView class there is a DoExit procedure:

I tried to override this method so InvalidateSelectionRects is not called to no avail.

Is there a way to keep the (multiple) selected elements while doing interactions outside the TTreeView?

Edit: With the tip provided by @dwrbudr I was able to list the selected items but the last one doesn't appear:

The code to print the selected items into a memo:

I clicked on Panel1, Panel2, Panel4 and Panel3 (in that order) but Panel3, as it was the last one I clicked doesn't appear in the Selections list. 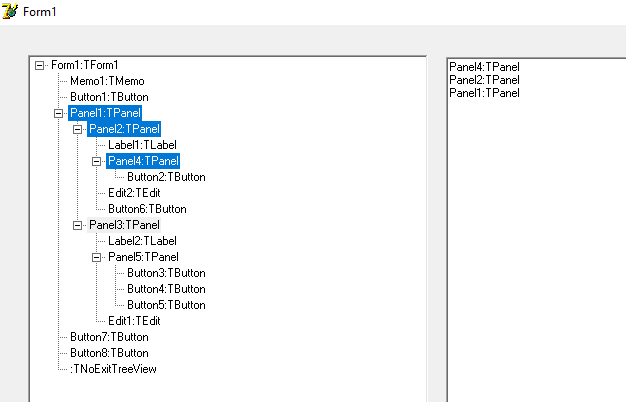 Set the HideSelection property of the tree view to False

Not the answer you're looking for? Browse other questions tagged delphi treeview or ask your own question.

1
How to Create a Simple Dictation Pad in Delphi2009+Vista
3
Setting the fontsize of a Paintbox causes OnPaint to be called
3
How to prevent from loss of focus when showing and/or closing secondary forms from the main form?
7
TTreeView - Change Expand and Collapse Image?
4
Can NIL be used for a Sender object?
12
TTreeView selection glitch while dragging a node
1
Select Cell in TAdvStringGrid with hidden columns
0
How insert or connect two procedures?