Is there a better color scale than the “rainbow” colormap?

I am plotting a series of curves in x, y space, where each curve is identified by a scalar value z. I wish to map the z value to color for each line, but most colormaps / color tables are constructed with images in mind (e.g. on a white backround, the grayscale colormap hides one extreme of z).

The rainbow/spectral/jet colormap - which is the default in many plotting programs - is better, but suffers from poor visibility for the yellow/cyan lines on white backgrounds, and poor color contrast among the blue/cyan/green colors. Borland and Taylor further discuss this and other problems with the rainbow colormap:

Can someone recommend something better? Some aspects I'm looking for:

The "gray" colormap and it's relatives (starting at black and ending at white) are designed for images, however when used to plot lines or points on a white background, some will be hard to see or invisible. The "jet" colormap and it's spectral relatives typically also have a yellow, green, or other color that is hard to see on a white background.

graph visualization data-visualization
Share
Improve this question
edited May 21 '17 at 19:14

Perceptually improved colormaps has several variations of rainbow colormaps with constant luminance or luminance that increases monotonically, with some documentation at The rainbow is dead…long live the rainbow!: 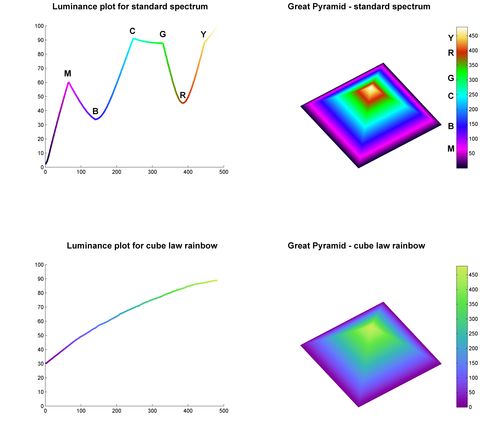 Dave Green's `cubehelix' colour scheme is a rainbow colormap "intended to be perceived as increasing in intensity .. from black to white, deviating away from a pure greyscale (i.e. the diagonal from black to white in a colour cube) using a tapered helix in the colour cube, while ensuring a continuous increase in perceived intensity". You could cut off the white end to make it suitable for a white background. 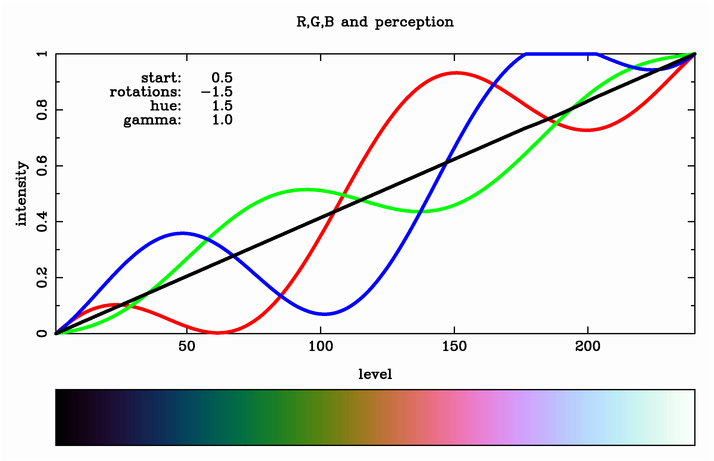 CMRmap.m "we devised a colormap that preserves colors, but mixes the color components so that the black and white rendering of the colormap produces a grayscale representation that is monotonic with intensity". Again, you'd have to clip off the white end: 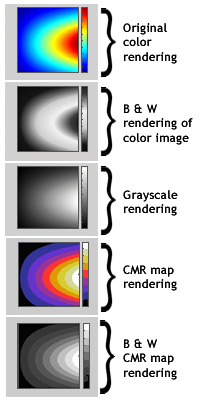 Rainbow/categorical color maps have been shown to be substantially worse than diverging ones for quantitative tasks. See this recent paper from InfoVis '11: 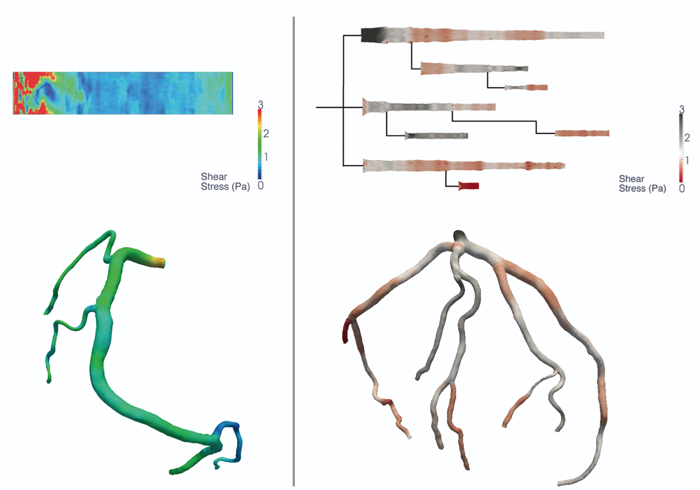 If you need a categorical scale, check out this excellent paper from CHI '12 that uses the XKCD survey dataset that talks about how we perceive differences in color. It allows you to rate a color scale by how well humans perceive the differences. Their web-based Color Palette Analyzer will let you evaluate your own color scale, too!

Here's the solution that I eventually used:

Kindlmann et al identified several isoluminant colors based on a face-based luminance matching study (available as html talk or pdf paper). The colors and RGB triples they found are as follows:

Linear interpolation between these points creates a modified "isoluminant rainbow" colormap that provides better contrast with a white background than the typical rainbow colormap using fully saturated yellow and cyan. In some cases, I use only a subset of these points to interpolate the colormap (for example by dropping the green or cyan). 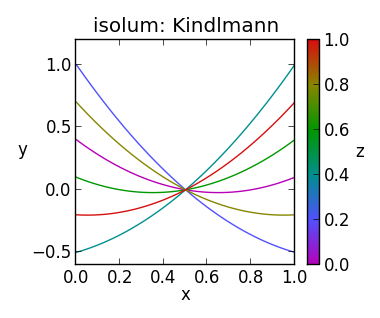 I would use Color Brewer for choosing colors. It gives various color palettes for maps depending on what your requirements are. The same palettes can be used for other visualizations.

Edit: Below are some more resources, but the recommended sequential colors start from a lighter color which is what you pointed out in your comment. Another option is to just copy what others are doing. For instance, the colors used in Many Eyes would probably work.

A good resource I found are the notes by Paul Tol, found here: http://www.sron.nl/~pault/

On that site you can find a few good colour palettes for plotting unordered, distinct datasets as well as diverging and rainbow colour maps for ordered data.

"To make graphics with your scientific results as clear as possible, it is handy to have a palette of colours that are:

I have this problem all the time. What I usually end up doing is taking a two color sequential scheme and cutting off the excessively low saturation portion. This works as long as there are only a few lines. However, I don't love this method and I would love to hear a better suggestion...

Not the answer you're looking for? Browse other questions tagged graph visualization data-visualization or ask your own question.

1
Is there an microsoft/.net “version” of the Google visualization api
0
How to fix color for the Likert data in R package HH?
10
Setting up custom color scale in R
1
Pandas- stacked bar chart with independent/unrelated partitions of bars
3
Change seaborn boxplot line rainbow color
2
D3 fill color using custom scale
1
How to visualize threads in a multi-threading task/time graph?
1
How to change the color of one Details Label in power bi Donut chart
0
Python matplotlib - Combine categorical background along with scatter plot