If Python strings are immutable, why does it keep the same id if I use += to append to it?

Strings in Python are immutable, which means the value cannot be changed. However, when appending to the string in the following example, it looks like the original string memory is modified since the id remains the same:

Conversely, in the following example, the id changes:

It's a CPython-specific optimization for the case when the str being appended to happens to have no other living references. The interpreter "cheats" in this case, allowing it to modify the existing string by reallocating (which can be in place, depending on heap layout) and appending the data directly, and often reducing the work significantly in loops that repeatedly concatenate (making it behave more like the amortized O(1) appends of a list rather than O(n) copy operations each time). It has no visible effect besides the unchanged id, so it's legal to do this (no one with an existing reference to a str ever sees it change unless the str was logically being replaced).

You're not actually supposed to rely on it (non-reference counted interpreters can't use this trick, since they can't know if the str has other references), per PEP8's very first programming recommendation:

Code should be written in a way that does not disadvantage other implementations of Python (PyPy, Jython, IronPython, Cython, Psyco, and such).

For example, do not rely on CPython’s efficient implementation of in-place string concatenation for statements in the form a += b or a = a + b. This optimization is fragile even in CPython (it only works for some types) and isn’t present at all in implementations that don’t use refcounting. In performance sensitive parts of the library, the ''.join() form should be used instead. This will ensure that concatenation occurs in linear time across various implementations.

If you want to break the optimization, there are all sorts of ways to do so, e.g. changing your code to:

breaks it by creating an alias, increasing the reference count and telling Python that the change would be visible somewhere other than s, so it can't apply it. Similarly, code like:

can't use it, because s + a occurs first, and produces a temporary that b must then be added to, rather than immediately replacing s, and the optimization is too brittle to try to handle that. Almost identical code like:

restores the optimization by ensuring the final concatenation is always one where s is the left operand and the result is used to immediately replace s.

Regardless of implementation details, the docs say:

… Two objects with non-overlapping lifetimes may have the same id() value.

The previous object referenced by s no longer exists after the += so the new object breaks no rules by having the same id.

In C, Java, or some other programming languages, a variable is an identifier or a name, connected to a memory location. 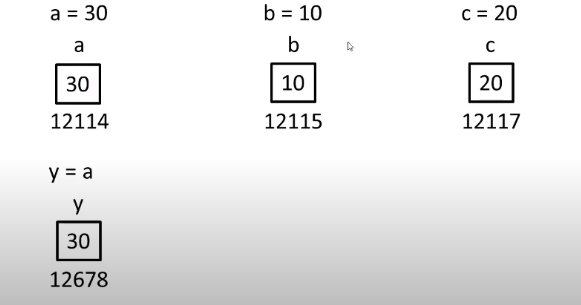 but in Python, a variable is considered a tag that is tied to some value. Python considers value as an object. and it can save memory and assign memory location with respect to value instead of variable.

Variables are the same but if values are different then it can assign new memory, in a closer look no variable can be referenced a=10 then it is removed by the garbage collector and a new value hold the variable in a new memory location. 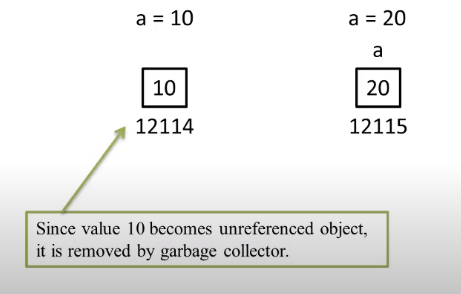 -2
python string concatenation doesn't change the string id
14
How is the s=s+c string concat optimization decided?
5
Why are f-strings slower than string concatenation when repeatedly adding to a string inside a loop?
0
Python List is adding my first item twice
1
String id does not change when string changes in Python. Complexity of adding char to string

1286
Why does comparing strings using either '==' or 'is' sometimes produce a different result?
1280
Why do people write #!/usr/bin/env python on the first line of a Python script?
1380
What is the use of "assert" in Python?
852
What does the "at" (@) symbol do in Python?
464
If strings are immutable in .NET, then why does Substring take O(n) time?
679
Why does python use 'else' after for and while loops?
903
Why does Python code run faster in a function?
1874
Why does this code using random strings print "hello world"?
1260
How does the @property decorator work in Python?