What does the Xcode 4.2 preference "Support Wirelessly Connected Devices" do?

In Xcode 4.2, there is a new preference under the General tab called "iOS Device Discovery" with the checkbox option "Support Wirelessly Connected Devices."

What does this option do? Once checked, how can we use this new capability?

Step 5 is what did it for me. I've been struggling for days unable to get my devices to appear, but when I wirelessly synced them from the device itself, the little wirelessly connected symbol popped up in the Organizer in XCode. Hopefully it will work you too.

Edit: The device has to awake for XCode to see it. When my device sleeps, it vanishes off the Organizer

Edit: This feature allows you to do all actions you could do on a device plug into your machine via a USB cable... only now without the cable. I've found this very useful to build to local testers with almost no effort on their part, run instruments like Leaks or Zombies to help track down pesky issues while your test is still comfortable sitting at their desk (instead of tethered to your machine).

Edit: This feature is no longer available as of Xcode 4.3.1 It will re-appear later when it has less issues (they are estimating in version 4.4).

2/2012 - This feature is still gone as of Xcode 4.6. There is currently no sign of it returning in near future, if ever.

10/2013 - Xcode 5.0 is here and there is still no sign the feature will return. We can pretty much assume it's dead for the foreseeable future at this point.

9/2014 - I have a report that wifi device capability does exist in Xcode 6.0. The hypothesis is having a device which is set up to wirelessly sync with iTunes. I have started testing, but so far have been unable to get positive results. Thanks to Steven Kramer for raising this possibility and the image. 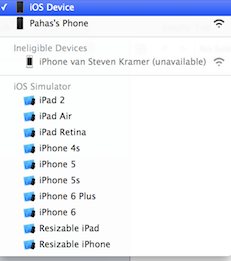 In some future Xcode release, the "Support Wirelessly Connected Devices" option will allow you to debug your apps on your devices without connecting them to a USB port of your development Mac. I find this feature isn't ready for production use yet, but you may have better luck with it. Here is what you need to do to set it up:

In my case, Xcode is able to install new development builds on the device, but it is not yet able to reliably run & debug it. Both LLDB and GDB have lots of trouble connecting to the device. Sometimes they do succeed, but it's not reliable enough for convenient development.

Please note that if you are using XCode 4.3, they have have removed wireless support, so following these steps will be in vain. Someone else also figured out they have silently removed the wirelessly connected devices feature: http://www.thomashajcak.com/wireless-support-in-xcode-4-3/

This allows the device to appear in the organizer if the device and computer are on the same wireless network even when not plugged in via a usb cord.

go to itunes, press sync, the device will be "re-connected", wait for a few sec, it should be showed in xcode

Another use for this switch is to address when Xcode is showing 100% CPU utilization when wireless syncing is enabled. By disabling wireless sync support, Xcode will only use hard wired devices for code deployment.

Not the answer you're looking for? Browse other questions tagged iphone objective-c ios xcode or ask your own question.

12
Xcode 6.1 debug without USB?
4
XCode-> Support Wirelessly Connected Devices [Opened]
17
Is it possible to debug application wireless or without connecting USB cable in XCODE?
7
How to debug Lightning Accessory via Xcode on iOS
3
Is it possible to wirelessly debug an iphone webapp?
2
Xcode 4.5 - Wirelessly build app on my device
5
Wireless Debugging in Xcode4.2
0
How to install app on iPad/iPhone without using USB cable?
0
ios xcode 4.5 over wifi
1
Support Wirelessly Connected Devices option
See more linked questions

626
What does the NS prefix mean?
145
Browse the files created on a device by the iOS application I'm developing, on workstation?
136
Xcode doesn't see my iOS device but iTunes does
0
XCode 4.3.3 - Lost "iOS Discovery Device" Option for Wifi testing
255
What is "Constrain to margin" in Storyboard in Xcode 6
900
Xcode error "Could not find Developer Disk Image"
277
Detect if the device is iPhone X
6
How to wirelessly connect Apple devices (iPad or iPhone) to Xcode without connecting the device to the Macbook using USB cable?
264
Xcode 10: A valid provisioning profile for this executable was not found