Why does splitlines() not give the expected result for triple dots in Jupyter?

I believe the following code

Indeed, this is the case when Python is executed normally (example run on Wandbox is here).

But the reality is ruthless (as usual); Google Colaboratory prints a result without "triple dots": 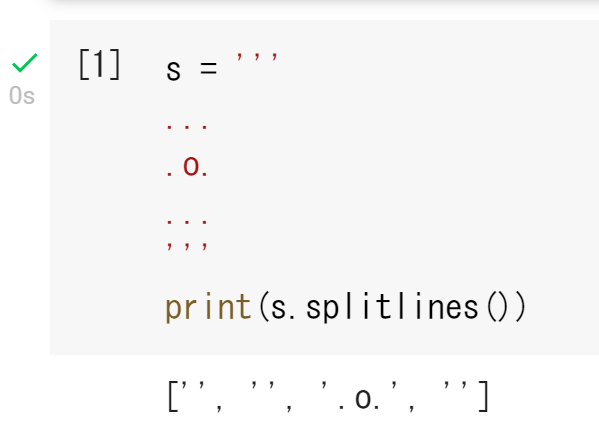 I also tried the same code with a locally installed Jupyter (Python 3.7.13, Jupyter notebook 6.4.12, IPython 7.34.0) and it gave me the same result as Google Colaboratory.

Does anyone know what causes this deletion of the triple dots?

Google collab interprets ... as part of the prompt. You can change the prompt to some other string and the result will be as you expected :

EDIT: As @user2357112 pointed out in the comments and in their answer changing the prompt does not affect this. Here it seemed to work because adding more lines to the beginning of the cell make Ipython interpreter think they are no longer part of the prompt. You can change your string to '\n...\n.o.\n...' as a workaround.

This is an IPython feature. If IPython thinks your input looks like it was copy-pasted from another interactive session, it will strip out everything it thinks is an interactive prompt before executing the input.

This is supposed to make it easy to copy and paste code from other interactive Python sessions without having to manually take the prompts off, but it causes problems when you have actual code that looks like it's got interactive prompts in it.

Unfortunately, if you want to disable this, it's going to be much more awkward than editing sys.ps2. I don't think there's a convenient config option. I think you'll have to retrieve the list of input cleanup transformers and remove the prompt strippers manually. On the IPython version Google Colab currently uses, that looks like this:

coro and _strip_prompts are undocumented implementation details, but I don't think there's a better way.

On a more modern IPython, the code looks like this:

Unlike the other snippet, I think everything here is part of the documented IPython API.

1297
Why does comparing strings using either '==' or 'is' sometimes produce a different result?
700
Why does python use 'else' after for and while loops?
735
Asking the user for input until they give a valid response
10
How to disable jupyter notebook history
0
no module named ... try to importcustom python module from a notebook in google Colab
4
How to run nbconvert on notebook in google colaboratory
19
Printed output not displayed when using joblib in jupyter notebook
1
Why jupyter notebook only prints the cython result once?
0
Can not modify global variable in an asynchronous function (coroutine) in python