What is the difference between object main timeline, object Stage and root in as3?

I want to know the difference between [object main timeline], [object Stage] and root in as3?

I have read from the topic How stage, root, and MainTimeline Fit Together. But I didn't get clearly.

I think the article you linked to sums it up quite nicely (even if it doesn't explain it all that well):

Stage is probably the easiest to understand. There is one stage per Flash Player - think of it as the window that the Flash movie plays in. It is the top-most display object - anything that appears on the screen is a child of the stage. The stage is always the same instance and any reference to stage returns the same value.

Root is the a logical "top" of the display hierarchy for a specific SWF file. As explained in the article, every SWF will have it's own root, which refers to the instance of the document class for that SWF.

You can see the different between root and stage when loading one SWF into another at run-time. Both SWFs will have a different root but the same stage. The root in each SWF will refer to the top-most display object of their own SWF which is their document class.

MainTimeline is the default class used for the document class. The document class is the display object which is added to the stage when the SWF movie is loaded. Underneath it is a normal class which extends MovieClip.

Here's a test you can do to illustrate how the stage, root and document relate:

2.Run the FLA and take note of the output. Note that the timeline code is in a class that extends movie clip of name "MainTimeline". This is the same instance referred to by root. The parent of the MainTimeline instance is Stage.

3.Set the document class to your own class (eg: "Test"). Note that the class doesn't actually have to exist - Flash will prompt you to create it automatically. 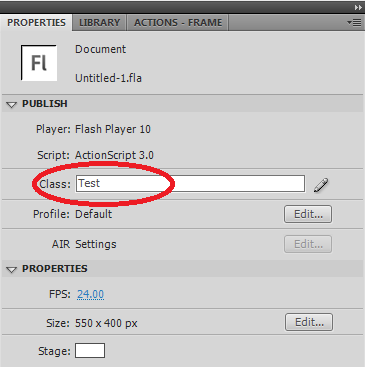 4.Run the FLA and note the new output. Note that the timeline code is now in a different class that extends movie clip called "Test". "Test" is the type of the movie clip which is added to the stage.

root is the main (uppermost) part of your movieclip

Object timeline and stage are independent of the main (_root) timeline

Root is especially different, in that it doesn't seem to receive mouse events. Can anyone confirm this? You can draw on the root, add solid objects to it, etc... but if you add a listener to the stage, the root, and the object being clicked, you'll find that the event bypasses the root. It seems that even though the root rests between the stage and all other objects in the display hierarchy, all events skip right over it when bubbling.

Not the answer you're looking for? Browse other questions tagged actionscript-3 actionscript or ask your own question.

0
What is the difference between [object main timeline], stage and root in as3?
2
How to remove all MovieClips, Sprites and graphics from a scene in AS3?
4
`root` changes in different places
2
ReferenceError: Error #1069: Property box_mc_0

0
Access main stage from class definition file (as3)
0
Main loader [as3]
0
get a display object on stage/root?
1
this and stage in as3
1
Operating on objects using Flash AS3 that were created manually by a designer in the timeline
0
What is the difference between [object main timeline], stage and root in as3?
2
AS3 - Call function in root timeline from class
1
Remove event listeners from movieclip from main timeline
0
AS3 Saving a sharedObject timeline