How does one access the dependent type unification algorithm from Coq's internals -- especially the one from apply and the substitution solution?

TLDR: I want to be able to compare two terms -- one with a hole and the other without the hole -- and extract the actual lambda term that complete the term. Either in Coq or in OCaml or a Coq plugin or in anyway really.

For example, as a toy example say I have the theorem:

The (lambda term) proof for this is:

if you had a partial proof script say:

Inspected the proof you would get as your partial lambda proof as:

but in fact you can close the proof and therefore implicitly complete the term with the ddt unification algorithm using apply:

This closes the proof but goes not give you the solution for ?Goal -- though obviously Coq must have solved the CIC/ddt/Coq unification problem implicitly and closes the goals. I want to get the substitution solution from apply.

How does one do this from Coq's internals? Ideally while remaining in Coq but OCaml internals or coq plugin solutions or in fact any solution I am happy with.

Appendix 1: how did I realize apply must use some sort of "coq unification"

I knew that apply must be doing this because in the description of the apply tactic I know apply must be using unification due to it saying this:

This is very very similar to what I once saw in a lecture for unification in Isabelle: 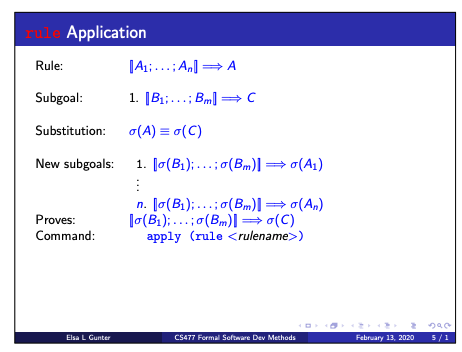 with some notes on what that means:

Appendix2: why not exact?

Note that initially I thought exact was the Coq tactic I wanted to intercept but I was wrong I believe. My notes on exact:

conversion seems to be equality check not really unification i.e. it doesn't try to solve a system of symbolic equations.

I'm genuinely curious about intercepting the apply tactic or call its unification algorithm.

apply indeed solve a unification, according to the document.

The tactic apply relies on first-order unification with dependent types unless the conclusion of the type of term is of the form P (t1 ... tn) with P to be instantiated.

Note that generally, the apply will turn one "hole" to several "hole"s that each cooresponds to a subgoal generated by it.

I have no idea how to access the internal progress of apply and get the substitution it uses.

However, You can call unify t u to do unification maully. you can refer to the official document. As far as I am concerned, the unicoq plugin provides another unification algorithm, and you can use munify t u to find unification between two items, see the Unicoq official repo.

An example of using unify and mutify:

However, I wonder whether I have understand your question correctly.

Do you want to name the goal?

Do you want to get the substituion?

Are you asking a substituion that make the goal term and the conclusion of the theorem applied match? For example:

Are you looking forward to get something like n=3? If you want to get such a "substitution", I am afraid the two tactics mentioned above will not help. Writing OCaml codes should be needed.

Do you want store the prove of current goal?

Or are you looking forward to store the proof of the current goal? Perhaps you can try assert, as mentioned in Using a proven subgoal in another subgoal in Coq.

Not the answer you're looking for? Browse other questions tagged coq unification or ask your own question.