This maybe really easy but there were no answers for it over the net. I want to echo a XML line via batch into a file but it misunderstands the XML closing tag for redirection ">". The line is as follows:

is there any way to give a hint to batch parser not to interpret a special string? I used double-quotes but it writes them to the file as well! The file should look like this after echo:

You can escape shell metacharacters with ^:

Note that since echo is a shell built-in it doesn't follow the usual conventions regarding quoting, so just quoting the argument will output the quotes instead of removing them.

In order to use special characters, such as '>' on Windows with echo, you need to place a special escape character before it. 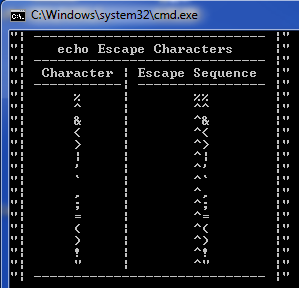 There is a short batch file, which prints a basic set of special character and their escape sequences.

One easy solution is to use delayed expansion, as this doesn't change any special characters.

EDIT : Another solution is to use a disappearing quote.

This technic uses a quotation mark to quote the special characters

The trick works, as in the special characters phase the leading quotation mark in !"! will preserve the rest of the line (if there aren't other quotes).
And in the delayed expansion phase the !"! will replaced with the content of the variable " (a single quote is a legal name!).

If you are working with disabled delayed expansion, you could use a FOR /F loop instead.

But as the seems to be a bit annoying you could also build a macro.

The way to output > character is to prepend it with ^ escape character:

The answer from Joey was not working for me. After executing

I got this error bash: syntax error near unexpected token `>'

This solution worked for me:

Why not use single quote?

Here's one more approach by using SET and FOR /F

the escape character ^ also did not work for me. The single quotes worked for me (using ansible scripting)

Not the answer you're looking for? Browse other questions tagged batch-file cmd escaping echo or ask your own question.

2
How to echo > character without quote in Windows Batch?
2
How can I write shell output if shell script is generated by batch
0
How to write special charecter into the text fie from batch script
0
How to echo something to a .txt file even if it's executable as a program BATCH
0
I want to create a python file in cmd
237
How can I run PowerShell with the .NET 4 runtime?
97
Escape angle brackets in a Windows command prompt
48
Batch character escaping
3
FindStr isn't work correct
3
batch file write <> to text file
See more linked questions

1230
How can I pass arguments to a batch file?
703
Batch file to delete files older than N days
682
How can I echo a newline in a batch file?
788
Windows batch files: .bat vs .cmd?
976
What characters do I need to escape in XML documents?
155
How do I escape ampersands in batch files?
2055
How to change the output color of echo in Linux
2737
Echo newline in Bash prints literal \n
486
Defining and using a variable in batch file
956
How to “comment-out” (add comment) in a batch/cmd?