Why does the indexing start with zero in 'C'?

Why does the indexing in an array start with zero in C and not with 1?

This question was posted over a year ago, but here goes...

About the above reasons

While Dijkstra's article (previously referenced in a now-deleted answer) makes sense from a mathematical perspective, it isn't as relevant when it comes to programming.

The decision taken by the language specification & compiler-designers is based on the decision made by computer system-designers to start count at 0.

Quoting from a Plea for Peace by Danny Cohen.

For any base b, the first b^N non-negative integers are represented by exactly N digits (including leading zeros) only if numbering starts at 0.

Why is this relevant

Computer memory addresses have 2^N cells addressed by N bits. Now if we start counting at 1, 2^N cells would need N+1 address lines. The extra-bit is needed to access exactly 1 address. (1000 in the above case.). Another way to solve it would be to leave the last address inaccessible, and use N address lines.

Both are sub-optimal solutions, compared to starting count at 0, which would keep all addresses accessible, using exactly N address lines!

The decision to start count at 0, has since permeated all digital systems, including the software running on them, because it makes it simpler for the code to translate to what the underlying system can interpret. If it weren't so, there would be one unnecessary translation operation between the machine and programmer, for every array access. It makes compilation easier.

Quoting from the paper:

Who's on first? Zero or one?

People start counting from the number one. The very word first is abbreviated as 1st, which indicates one. This, however, is a very modern notation. The older concepts do not necessarily support this relationship.
In English and French the word first is not derived from the word one, but from an old word for prince, which means foremost. Similarly, The English word second is not derived from the number two but from an old word which means "to follow." Obviously, there is a close relation between third and three, fourth and four, and so on.
These relationships occur in other language families, also. In Hebrew, for example, first is derived from the word head, meaning "the foremost." The Hebrew word for second is derived from the word two, thisrelationship of ordinal and cardinal names holds for all the other numbers.
For a very long time, people have counted from one, not from zero, As a matter of fact, the inclusion of zero as a full-fledged member of the set of all numbers is a relatively modern concept, even though it is one of the most important numbers mathematically. It has many important properties, such as being a multiple of any integer.
A nice mathematical theorem states that for any basis b the first bⁿ positive integers are represented by exactly n digits (leading zeros included). This is true if and only if the count starts with zero (hence, 0 through bⁿ-1), not with one (for 1 through bⁿ).
This theorem is the basis of computer memory ad dressing. Typically, 2ⁿ cells are addressed by an N-bit addressing scheme. A count starting from one rather than zero would cause the loss of either one memory cell or an additional address line. Since either price is too expensive, computer engineers agree to use the mathematical notation that starts with zero. Good for them!
This is probably the reason why all memories start at address-0, even those of systems that count bits from B1 up.
The designers of the 1401 were probably ashamed to have address-0. They hid it from the users and pretended that the memory starts at address-1.
Communication engineers, like most people, start counting from one. They never have to suffer the loss of a memory cell, for example. Therefore, they happily count one-to-eight, not zero-to-seven, as computer people do. ref

Because 0 is how far from the pointer to the head of the array to the array's first element.

But foo decomposes to a pointer, and the above access has analogous pointer arithmetic way of accessing it

These days pointer arithmetic isn't used as frequently. Way back when though, it was a convenient way to take an address and move X "ints" away from that starting point. Of course if you wanted to just stay where you are, you just add 0!

Because 0-based index allows...

Because it made the compiler and linker simpler (easier to write).

"...Referencing memory by an address and an offset is represented directly in hardware on virtually all computer architectures, so this design detail in C makes compilation easier"

"...this makes for a simpler implementation..."

Array index always starts with zero.Let assume base address is 2000. Now arr[i] = *(arr+i). Now if i= 0, this means *(2000+0)is equal to base address or address of first element in array. this index is treated as offset, so bydeafault index starts from zero.

I am from a Java background. I Have presented answer to this question in the diagram below which i have written in a piece of paper which is self explanatory 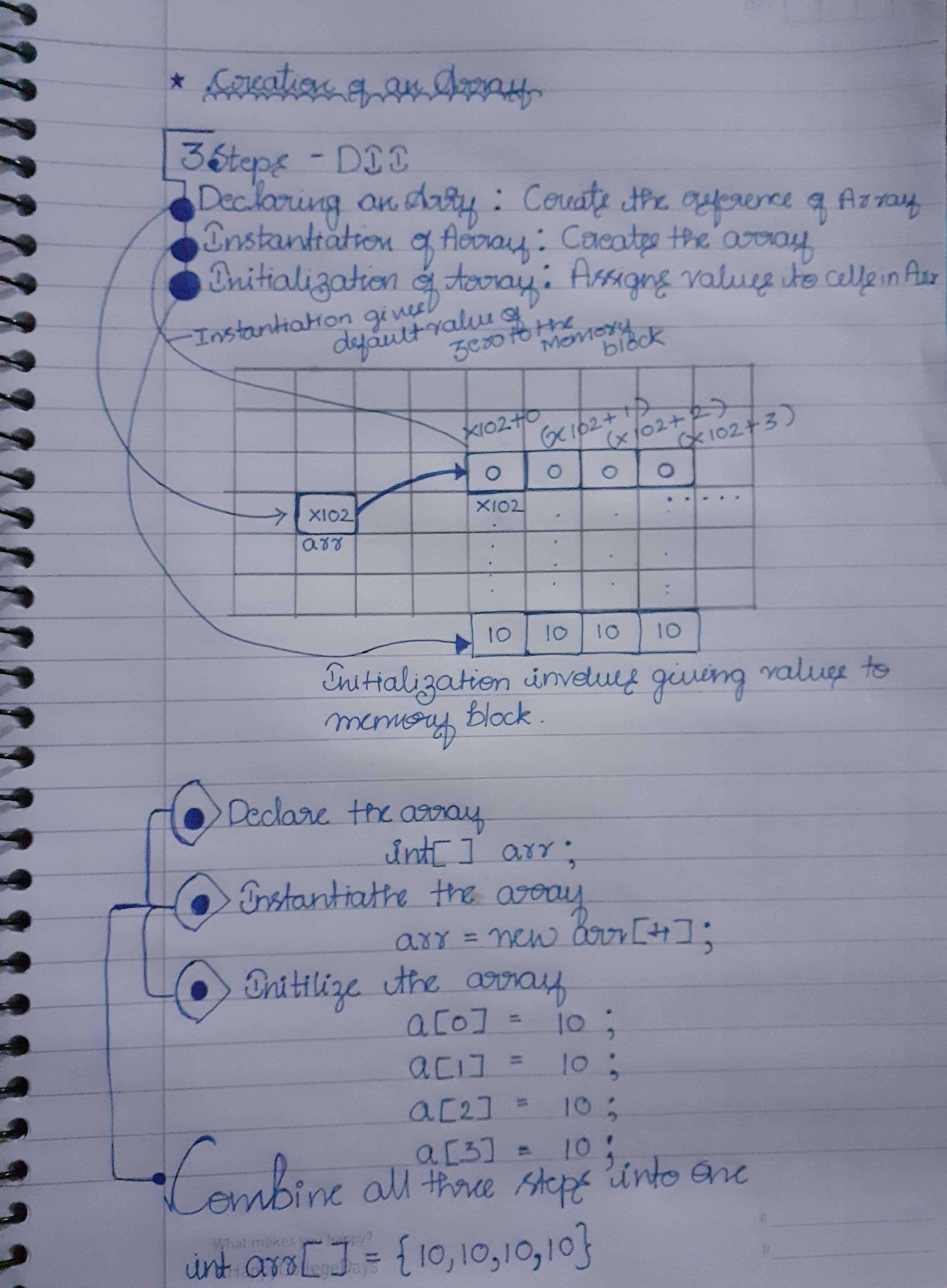 Note: Blocks shown in the image is memory representation

It is because the address has to point to the right element in the array. Let us assume the below array:

Let us now consider the start of the address being 12 and the size of the element be 4 bytes.

If it was not zero-based, technically our first element address in the array would be 16 which is wrong as it's location is 12.

Although it wouldn't be horrible to identify items based upon the number above them, defining the first item in the range (X,Y) as being the one above X generally works out more nicely than defining it as the one below (X+1).

and let we consider the indexing starts from 1 not from 0.


which is not true because the initial location was at 100.
it should be pointing to 100 not at 104
this is wrong

and that was the actual location of the element
this is why indexing starts at 0;

I hope it will clear your point.

The technical reason might derive from the fact that the pointer to a memory location of an array is the contents of the first element of the array. If you declare the pointer with an index of one, programs would normally add that value of one to the pointer to access the content which is not what you want, of course.

Try to access a pixel screen using X,Y coordinates on a 1-based matrix. The formula is utterly complex. Why is complex? Because you end up converting the X,Y coords into one number, the offset. Why you need to convert X,Y to an offset? Because that's how memory is organized inside computers, as a continuous stream of memory cells (arrays). How computers deals with array cells? Using offsets (displacements from the first cell, a zero-based indexing model).

So at some point in the code you need (or the compiler needs) to convert the 1-base formula to a 0-based formula because that's how computers deal with memory.

this can be written in the pointers expression like this-

as we know array name contains the address of its first element so arr = 100 now,

because of this expression we are unable to access the element at address 100 which is official first element,

this will be resolved as

now, we know that array name contains the address of its first element so,

reference: all details are written in book "The C programming language by brian kerninghan and dennis ritchie"

Array name is a constant pointer pointing to the base address.When you use arr[i] the compiler manipulates it as *(arr+i).Since int range is -128 to 127,the compiler thinks that -128 to -1 are negative numbers and 0 to 128 are positive numbers.So array index always starts with zero.

Not the answer you're looking for? Browse other questions tagged c arrays or ask your own question.

3
Why Array index start from '0'
3
Why do prevailing programming languages like C use array starting from 0?
0
Why doesn't the index/list of an array begin with 1?
0
What is error in code for adding 3*3 matrix?
2
Strange behaviour when finding largest number in Array
1
Why do arrays start on 0 instead of 1? (C, C++)
-1
Error: terminate called after throwing an instance of 'std::out_of_range
0
What am I doing wrong here? Why the code is not giving the required output?
-1
Segmentation Fault while declaring a fixed length 2-D array inside main
11
Why is array indexing in Java start with 0?
See more linked questions