I am trying to use Husky with Eslint. I’m trying to create a pre-commit (lint and husky) script that’ll prevent commits with added files if they have lint errors. However, my project isn’t in a mono-repo format, but rather a custom format. In other words, my .husky folder and the package.json file are both in a sub-directory called “react-client” (seen below). This is problematic because husky always assumes that the .husky folder is in the root folder with the .git folder, but in this case it’s in the “react-client” folder. 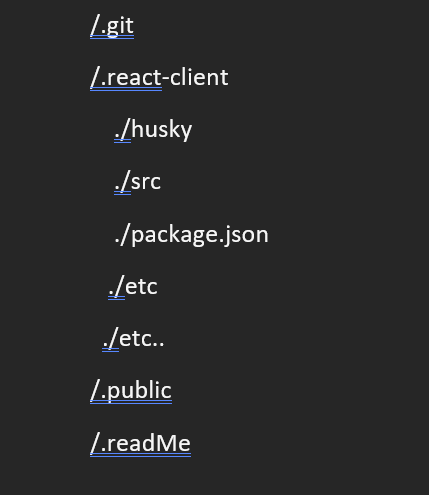 Everything that I read on this matter led me to these steps for the husky docs (below), but that didn’t work either. https://typicode.github.io/husky/#/?id=custom-directory

I keep receiving this error message

I’m thinking that I need more than “cd react client” and “npm test” in my .husky pre-commit file. Or that I might need to make changes to my .git folder files. Also, I believe that my package.json scripts (below) could be incorrect/need more configurations

I wasn't adding a file in the correct directory. I had to add a pre-commit file with no file extension under the .husky folder with the following contents:

783
How to convert existing non-empty directory into a Git working directory and push files to a remote repository
2293
Do I commit the package-lock.json file created by npm 5?
12
How to run husky pre-commit in child directory only
9
Why isn't my git pre-commit hook running?
21
Run eslint "ONLY" on the staged files
10
Husky v5 doesn't create Git hooks
1
Husky error on precommit: npm ERR! missing script: pre-commit
0
npm package not working in custom bash script during pre-commit hook
1
Husky pre-commit doesn't fire in create-react app