How to loop through Excel files and load them into a database using SSIS package?

I need to create an SSIS package for importing data from multiple Excel files into an SQL database. I plan on using nested Foreach Loop containers to achieve this. One Foreach File Enumerator and nested within that, a Foreach ADO.net Schema Rowset Enumerator

Problem to consider: Sheet names are different between excel files but structure remains the same.

I have created an Excel Connection Manager, but the Schema Rowset Enumerator is not accepting the connection manager in the Enumerator configuration.

After researching, I found that you can use the Jet Ole db provider to connect to an excel file. However, I can only specify Microsoft Access Database Files as the data source. Attempting to insert an Excel File as the data source fails

Any help would be greatly appreciated

Following example was created using SSIS 2008 R2 and Excel 2007. The working folder for this example is F:\Temp\ 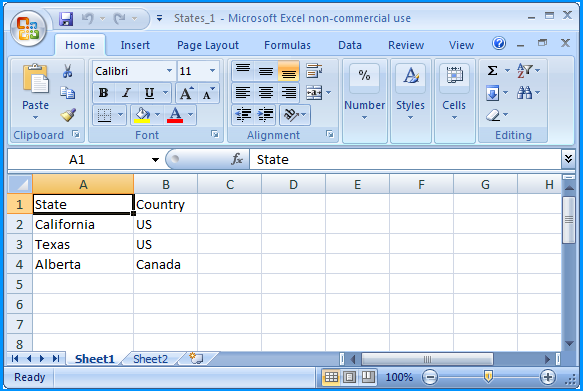 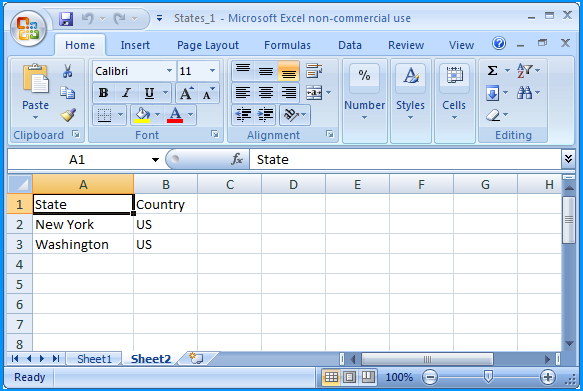 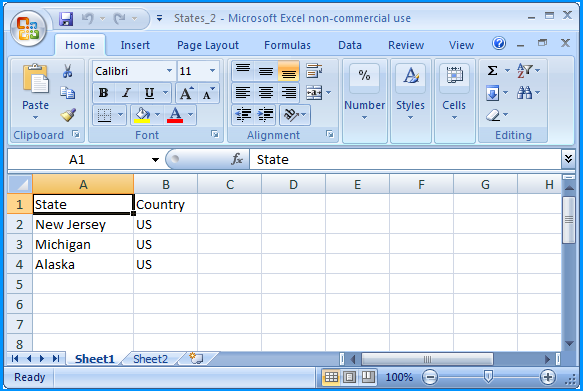 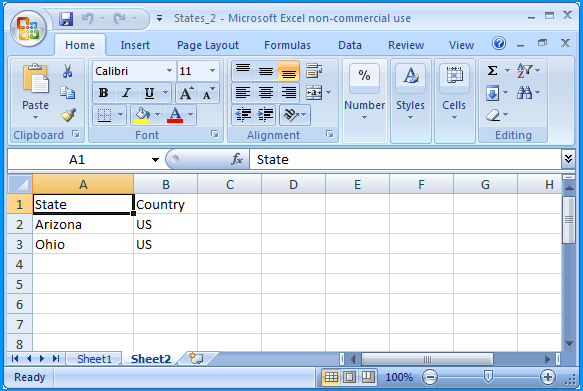 Create a table in SQL Server named dbo.Destination using the below create script. Excel sheet data will be inserted into this table.

The table is currently empty.

Create a new SSIS package and on the package, create the following 4 variables. FolderPath will contain the folder where the Excel files are stored. FilePattern will contain the extension of the files that will be looped through and this example works only for .xlsx. FilePath will be assigned with a value by the Foreach Loop container but we need a valid path to begin with for design time and it is currently populated with the path F:\Temp\States_1.xlsx of the first Excel file. SheetName will contain the actual sheet name but we need to populate with initial value Sheet1$ to avoid design time error.

In the package's connection manager, create an ADO.NET connection with the following configuration and name it as ExcelSchema. 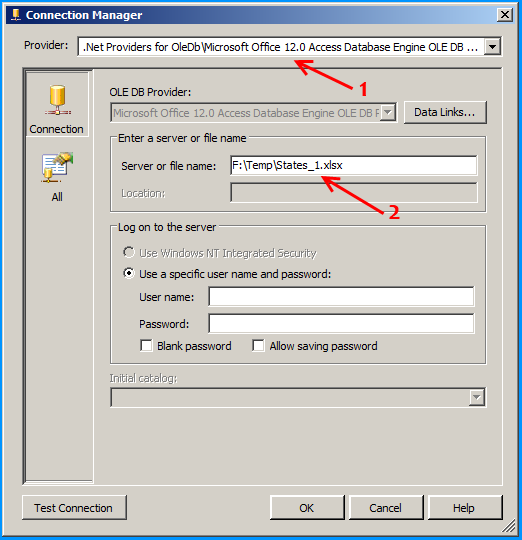 Click on the All section on the left side and set the property Extended Properties to Excel 12.0 to denote the version of Excel. Here in this case 12.0 denotes Excel 2007. Click on the Test Connection to make sure that the connection succeeds. 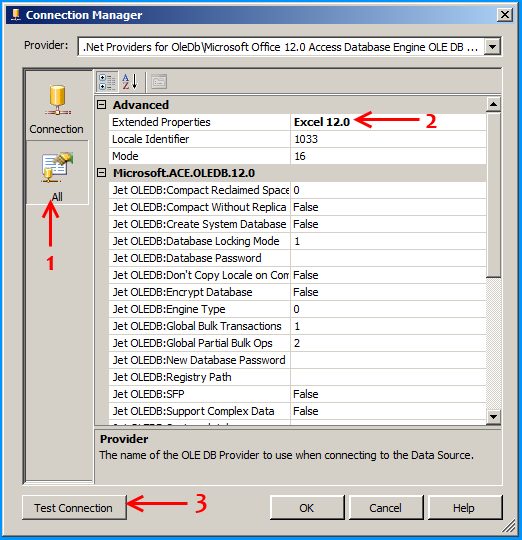 Create an Excel connection manager named Excel as shown below. 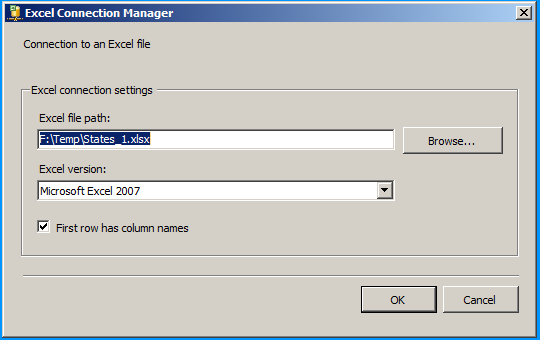 Create an OLE DB Connection SQL Server named SQLServer. So, we should have three connections on the package as shown below.

We need to do the following connection string changes so that the Excel file is dynamically changed as the files are looped through. 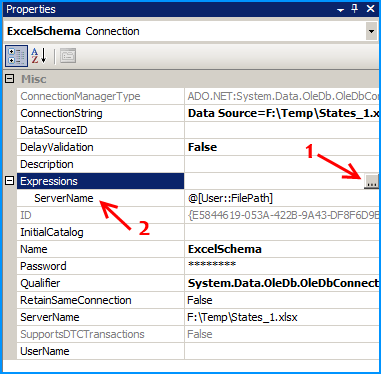 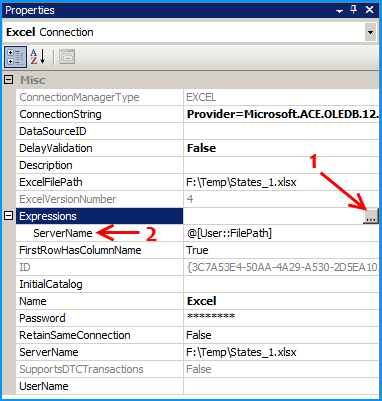 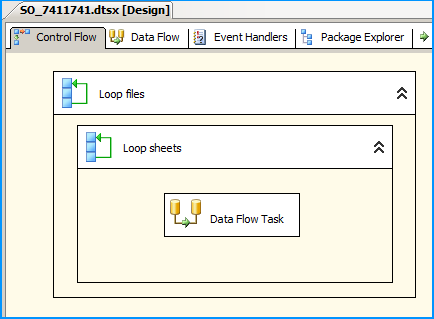 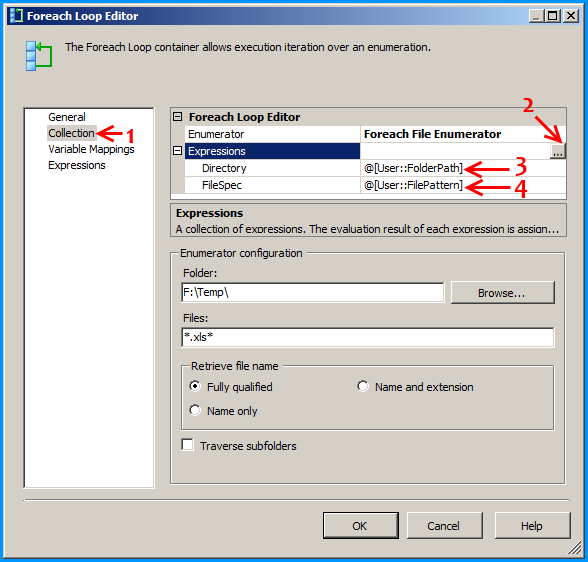 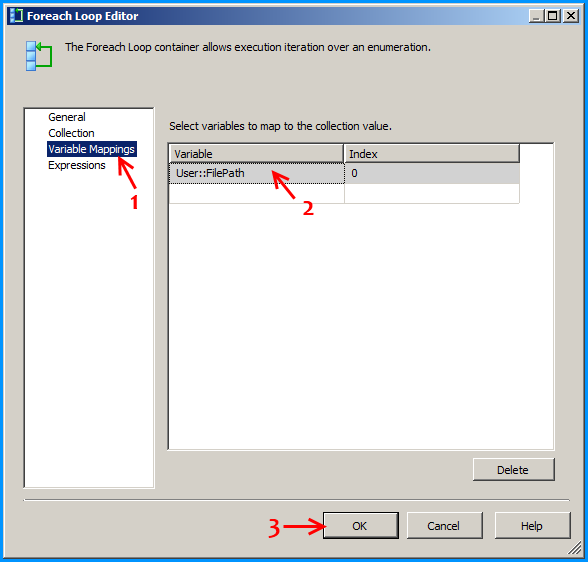 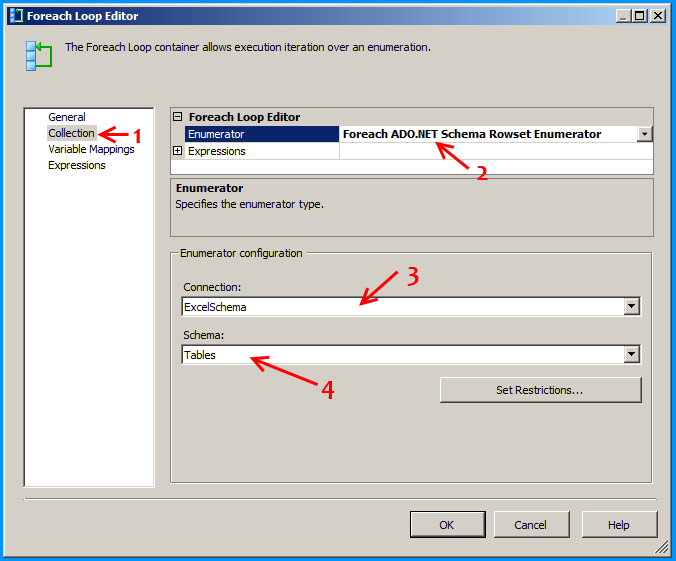 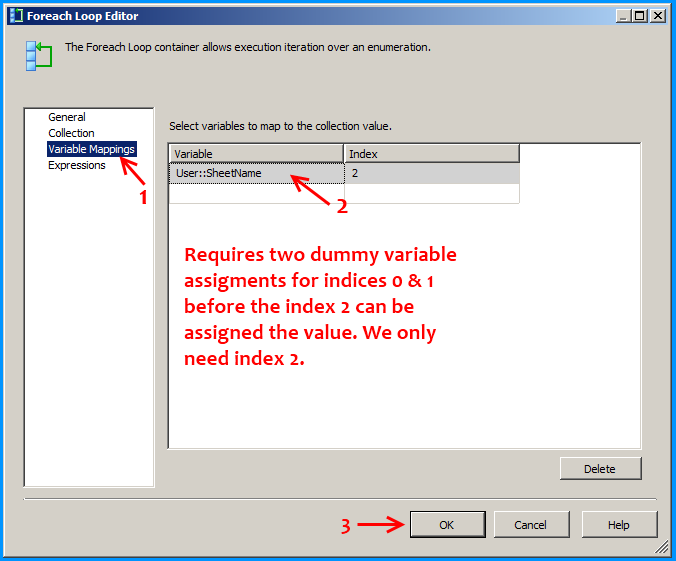 Inside the data flow task, place an Excel Source, Derived Column and OLE DB Destination as shown below: 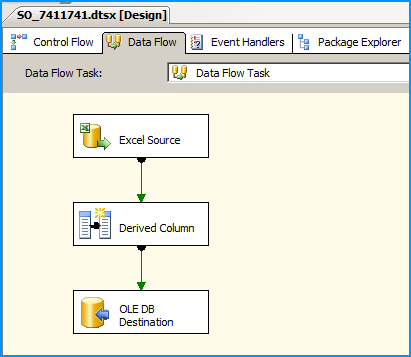 Configure the Excel Source to read the appropriate Excel file and the sheet that is currently being looped through. 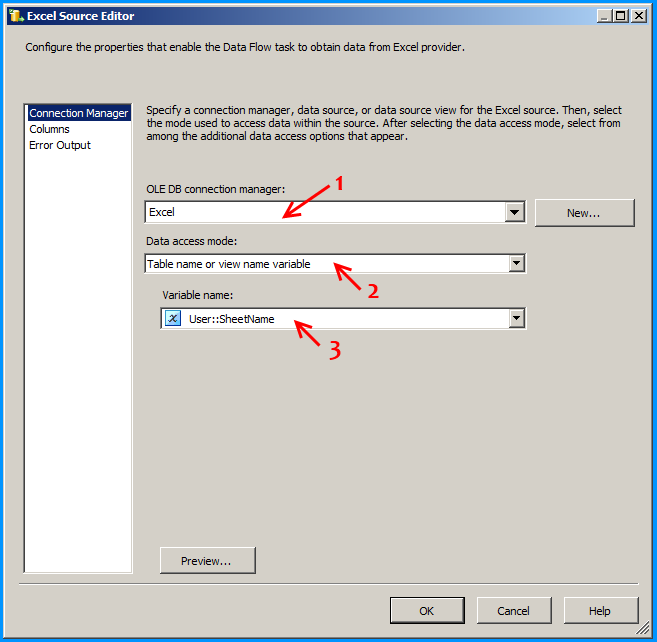 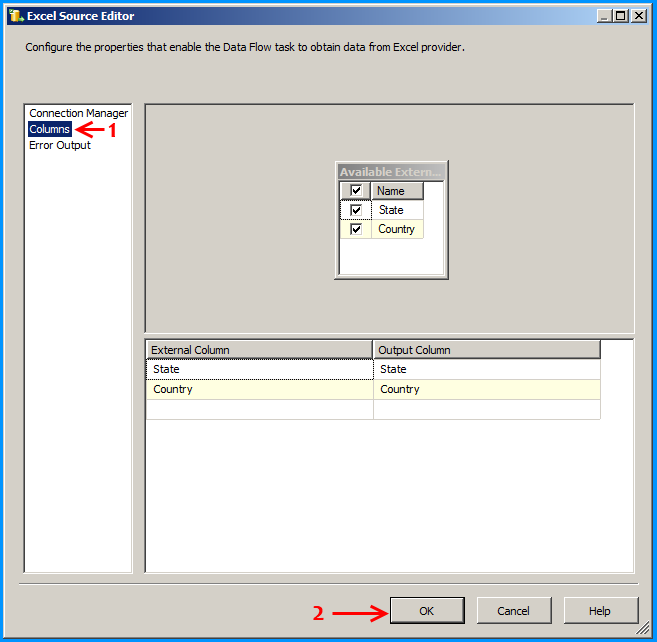 Configure the derived column to create new columns for file name and sheet name. This is just to demonstrate this example but has no significance. 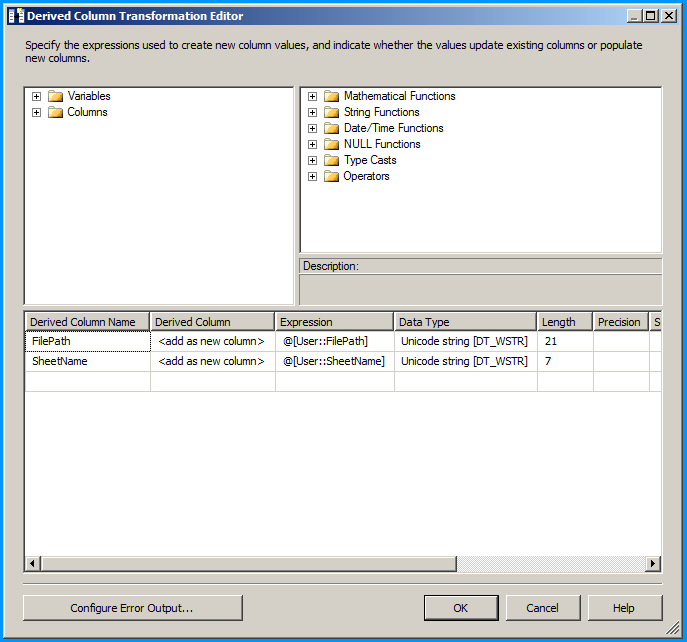 Configure the OLE DB destination to insert the data into the SQL table. 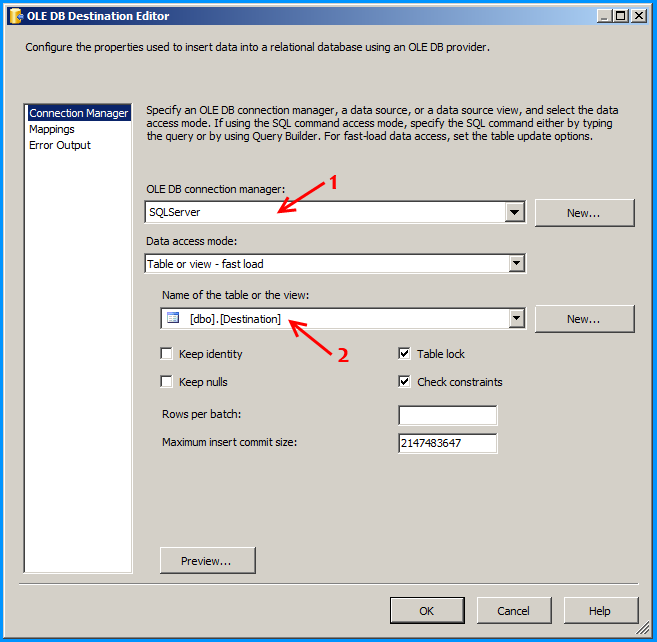 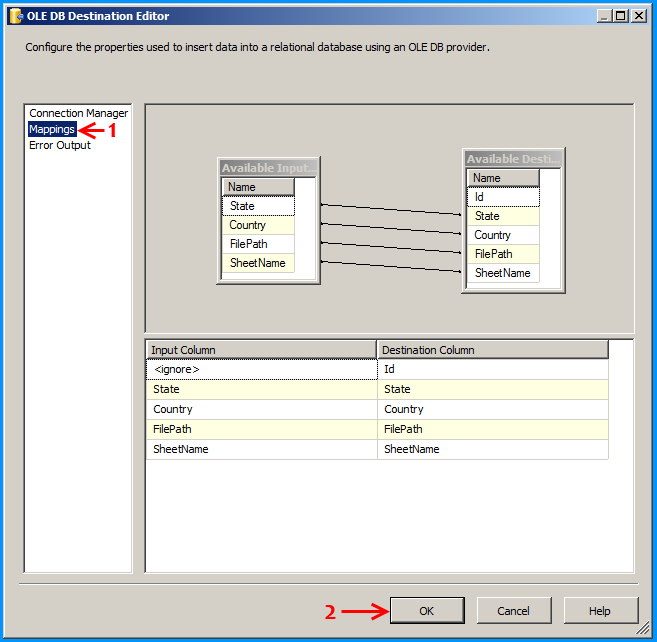 Below screenshot shows successful execution of the package. 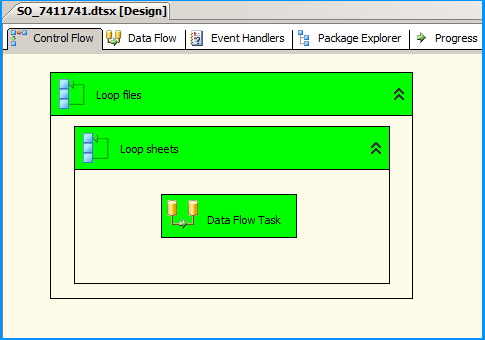 Below screenshot shows that data from the 4 workbooks in 2 Excel spreadsheets that were creating in the beginning of this answer is correctly loaded into the SQL table dbo.Destination. 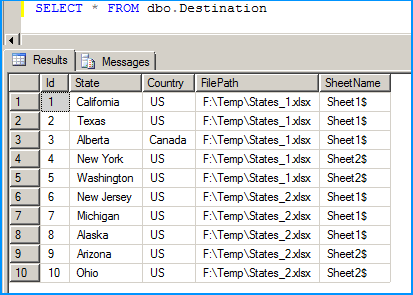 I ran into an article that illustrates a method where the data from the same excel sheet can be imported in the selected table until there is no modifications in excel with data types.

If the data is inserted or overwritten with new ones, importing process will be successfully accomplished, and the data will be added to the table in SQL database.

The article may be found here: http://www.sqlshack.com/using-ssis-packages-import-ms-excel-data-database/

is an excellent article by Tim Smith on extracting data from multiple Excel files and/or multiple sheets.

Once the Excel files have been converted to CSV the data import is much less complicated.

Not the answer you're looking for? Browse other questions tagged excel ssis or ask your own question.