How to use SortedMap interface in Java?

What is the best way to keep the map sorted according to the float?

Is SortedMap the best answer? TreeMap? How do I use it?

I only create the map once and replace the MyObject frequently using myMap.put() and myMap.get().

I would use TreeMap, which implements SortedMap. It is designed exactly for that.

See the Java tutorial page for SortedMap.
And here a list of tutorials related to TreeMap.

A TreeMap is probably the most straightforward way of doing this. You use it exactly like a normal Map. i.e.

It's worth taking a look at the API docs, http://download.oracle.com/javase/6/docs/api/java/util/TreeMap.html to see what else you can do with it.

TreeMap, which is an implementation of the SortedMap interface, would work.

TreeMap sorts by the key natural ordering. The keys should implement Comparable or be compatible with a Comparator (if you passed one instance to constructor). In you case, Float already implements Comparable so you don't have to do anything special.

You can call keySet to retrieve all the keys in ascending order.

Use either of the Map implementations bundled with Java 6 and later that implement NavigableMap (the successor to SortedMap):

As others mentioned, SortedMap is an interface while TreeMap is one of multiple implementations of that interface (and of the more recent NavigableMap.

Having an interface allows you to write code that uses the map without breaking if you later decide to switch between implementations.

This code still works if later change implementations. Perhaps you later need a map that supports concurrency for use across threads. Change that declaration to:

…and the rest of your code using that map continues to work.

Here is a graphic table I made highlighting the various features of each. Notice that two of the bundled implementations keep the keys in sorted order by examining the key’s content. Also, EnumMap keeps its keys in the order of the objects defined on that enum. Lastly, the LinkedHashMap remembers original insertion order. 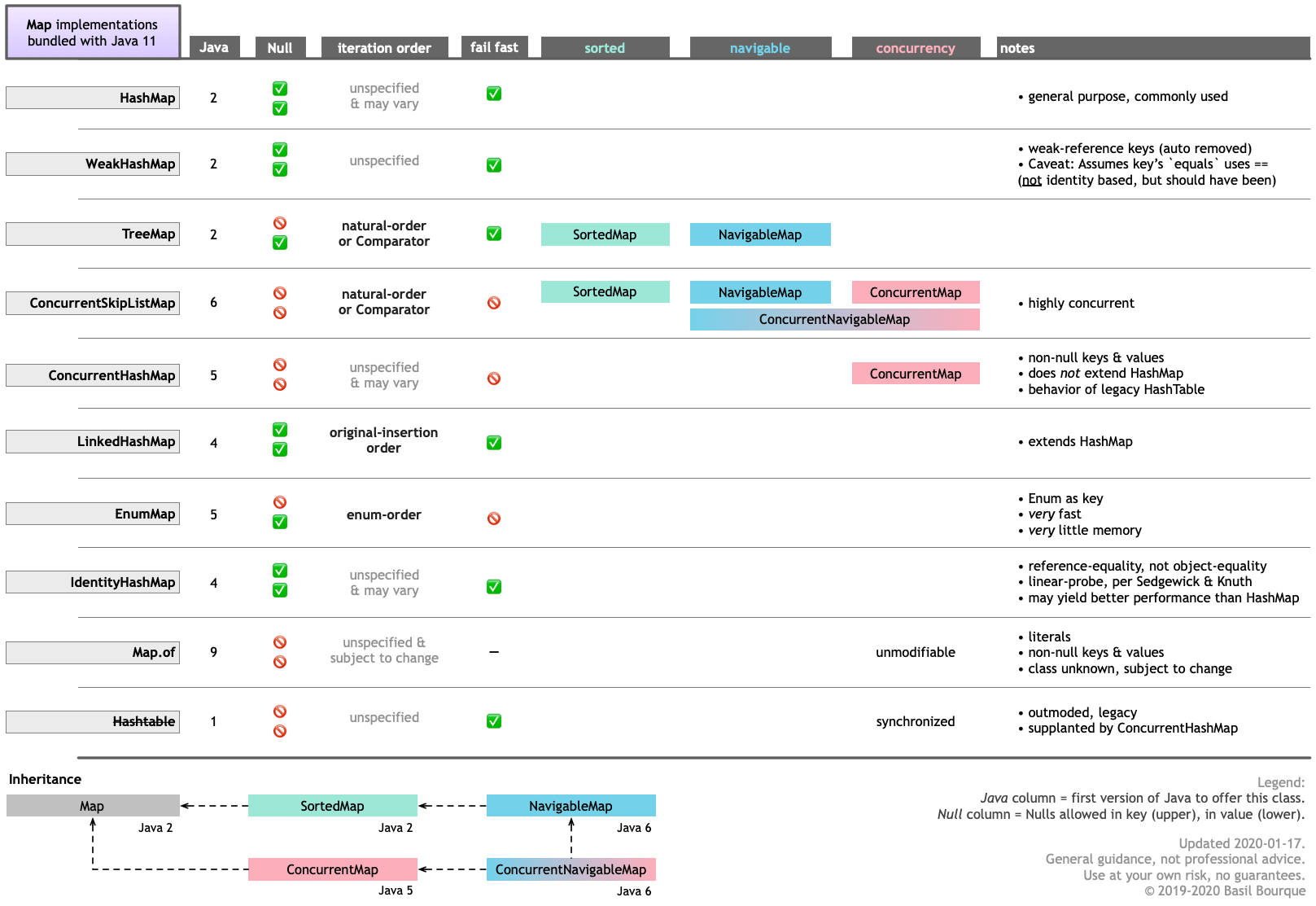 You can use the TreeMap class for this purpose which implements the SortedMap interface.

The class TreeMap implements the NavigableMap interface which extends the SortedMap interface.

This will have the effect that all the keys will be ordered according to their implementation of their Comparable interface.

The keys are now automatically in sorted order. When we iterate over them we get the following:

Because TreeMap elements are required to be ordered the Objects which are used as a key need to have a implementation of the Comparable interface. For example the following code will throw a runtime error:

Not the answer you're looking for? Browse other questions tagged java sortedmap or ask your own question.

-1
Hashtable keys get reordered when iterating
1823
Sort a Map<Key, Value> by values
4
Collect to map the order/position value of a sorted stream
2
Amount of times a String appears in a Java hash table
2
Adding a SimpleEntry to a SortedMap
-1
Android sort a Hashmap in arraylist
-1
When should I sort Map elements in Java?
1
How to sort list of employees in HashMap<String,List<Employee>>?
0
Approach to filter a map

7491
Is Java "pass-by-reference" or "pass-by-value"?
3809
How do I efficiently iterate over each entry in a Java Map?
1416
How to round a number to n decimal places in Java
4311
Avoiding NullPointerException in Java
2558
How do I call one constructor from another in Java?
4552
How do I read / convert an InputStream into a String in Java?
3483
When to use LinkedList over ArrayList in Java?
3947
How do I generate random integers within a specific range in Java?
3610
How can I create a memory leak in Java?
3919
Proper use cases for Android UserManager.isUserAGoat()?