I know Ctrl+Shift+Backspace is used to go to the location of the last edit.

But I want to jump to whichever location I was most recently at, not necessarily one where I edited anything.

For example, if I jumped to a declaration using Ctrl+B, then I want to go back to where I was before jumping.

The underlying problem is Ctrl+Alt+Left and Right are used by window managers to switch workspace and/or OEM utilities to change the screen orientation.

You can change the assignments using File / Settings / Keymap then Main Menu / Navigate find Back and Forward and right click to Add Keyboard Shortcut to set an alternative key chord.

Alt Graph+Left and Alt Graph+Right works well for me (IDEA 13.1.4 on Ubuntu under IceWM).

For OSX, cmd + [ and ] are the best choices to go back & forth, Since they are found so near to fingers, avoiding you wrist twisting a bit, one keypress lesser, ideal for users in vim mode.

As the OP requested, this works well with cmd + B which facilitates jumping inside/to the method/variable definition and comes back immediately using cmd + [. Give a try.

By default these keys are assigned for Ubuntu's workspace navigation.

You need to disable that by going to :

Or you can choose to change shortcuts in Intellij itself:

to move to the previous carret location.

Many excellent answers so far, and they do answer the question...But, if you don't want to have to deal with disabling graphics driver's settings, or creating new keyboard mappings, or are developing through a remote session (RDP) or within a VM that intercepts your keystrokes, good-old keyboard navigation still works. Just do Alt-N to bring up the Navigate menu and then hit the B key.

Please note that you don't hit all keys at the same time. So:

This is what I use all the time, for exactly the case that the OP asked about. Also, this will probably hold through any IntelliJ updates.

Ctrl+[ and Ctrl+] navigate between previous locations in the current file.

Ctrl+Alt+← and Ctrl+Alt+→ navigate between previous locations in all files.

Or you can have a toolbar option for it. Enable the tool bar by View -> Toolbar. The Left and Right Arrows will do the same. If you hover over it then you can see the shortcut key combination also. 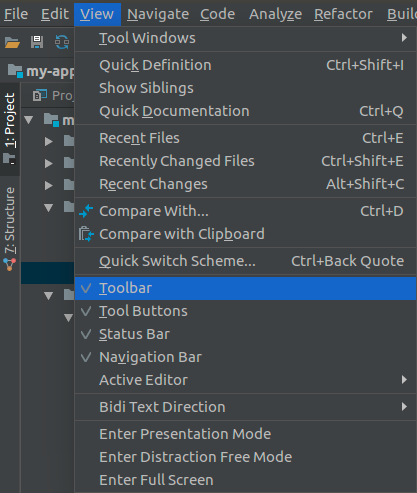 Just in case the key combination is not working (this can be due to several reasons like you are using a virtual machine, etc) you can change this default key combination, or you can add an extra combination (ex: For Back/Move to previous Ctrl + Alt + < or Comma).

Go to Settings -> select keymap (type keymap in the search bar) -> **Editor Actions -> search for back and find Navigate options -> change the settings as you prefer. 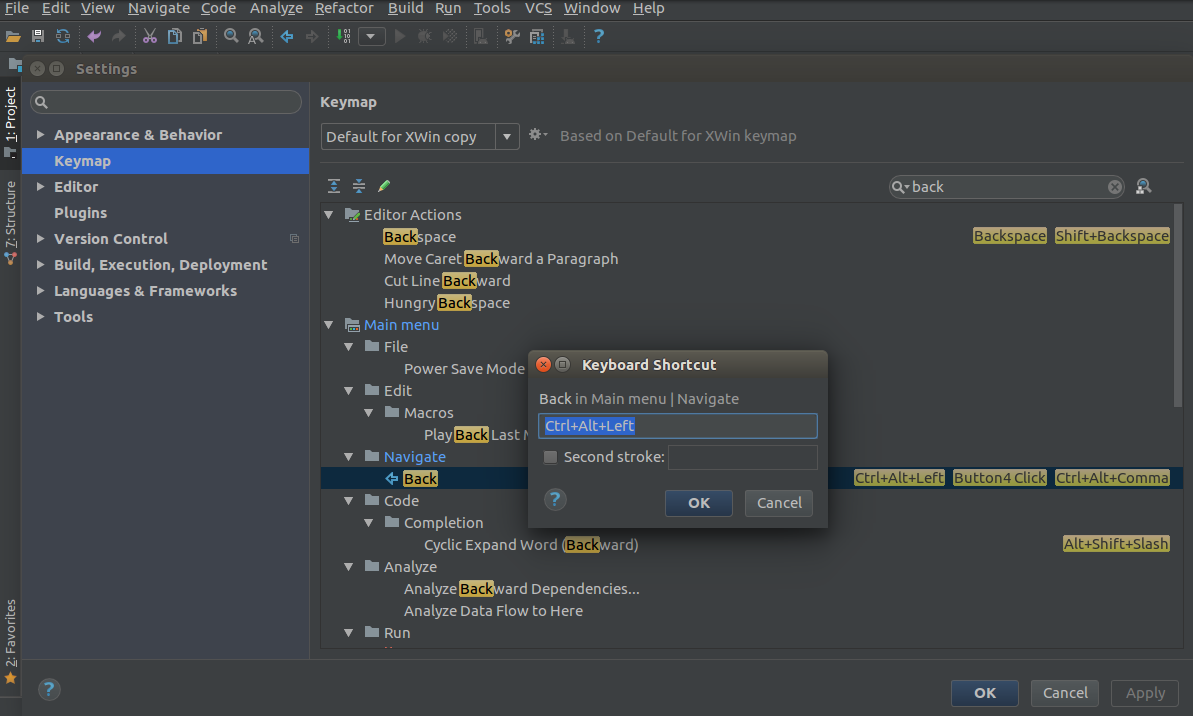 For Mac users Use Command+[ for backward and Command+] for forward.

Depends on the Keymap selected.

I was facing similar problems in Pycharm. To resolve change your Keymap in Preferences.

Using the following ways using only two keys will be the easier:

Like @itsneo said, I personally find ⌘ + [ and ] the most convenient ones on a mac. But I can understand if you come from Linux side of things. Then you can use ⌘ + alt + ← or →.

With version 2018.1 the keyboard short cuts for navigation are Shift+Alt+Left or Right

If you are on a mac keyboard using with UNIX OS;

control + alt + command + left or right should work for sure.

Not the answer you're looking for? Browse other questions tagged intellij-idea keyboard-shortcuts or ask your own question.

1
How to return cursor to method name after Ctrl + LEFT MOUSE on this method?
96
In PyCharm, how to go back to last location?
10
Intellij - Go back and forth within a file
6
Executing multiple lines of input in pycharm console from first line