I need to convert Object o to Double. Is the correct way to convert it to String first?

You can't cast an object to a Double if the object is not a Double.

Check out the API.

Those methods give you a way of getting a Double instance from a String or double primitive. (Also not the constructors; read the documentation to see how they work) The object you are trying to convert naturally has to give you something that can be transformed into a double.

Finally, keep in mind that Double instances are immutable -- once created you can't change them.

But it seems weird to me that you're going from an Object to a Double. You should have a better idea what class of object you're starting with before attempting a conversion. You might have a bit of a code quality problem there.

Note that this is a conversion, not casting.

If your Object represents a number, eg, such as an Integer, you can cast it to a Number then call the doubleValue() method.

You can use the instanceof operator to test to see if it is a double prior to casting. You can then safely cast it to a double. In addition you can test it against other known types (e.g. Integer) and then coerce them into a double manually if desired.

In Java version prior to 1.7 you cannot cast object to primitive type

You can cast an Object to a Double just fine

Beware, it can throw a ClassCastException if your object isn't a Double

Also worth mentioning -- if you were forced to use an older Java version prior to 1.5, and you are trying to use Collections, you won't be able to parameterize the collection with a type such as Double.

You'll have to manually "box" to the class Double when adding new items, and "unbox" to the primitive double by parsing and casting, doing something like this:

The old-school list will contain only type Object and so has to be cast to Double.

Also, you won't be able to iterate through the list with an enhanced-for-loop in early Java versions -- only with a for-loop.

I tried this and it worked:

Tried all these methods for conversion -> 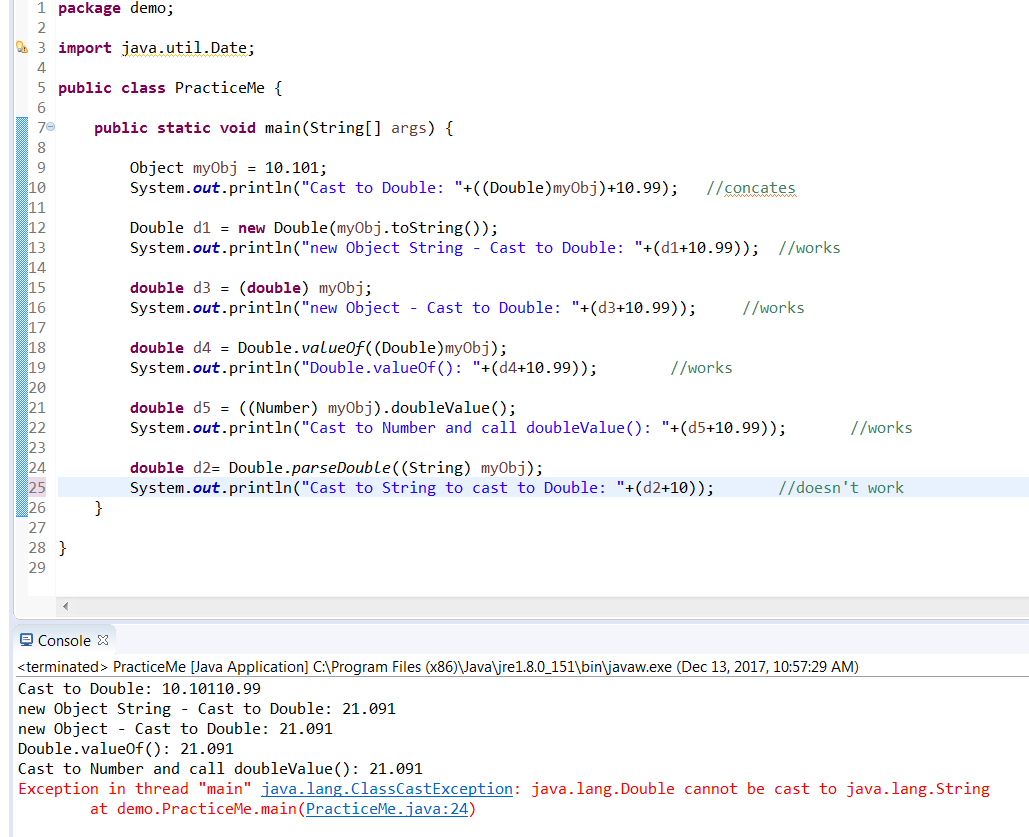 Not the answer you're looking for? Browse other questions tagged java casting double or ask your own question.