What is the language of this deterministic finite automata?

I have no idea what the accepted language is.

From looking at it you can get several end results:

How to write regular expression for a DFA

In any automata, the purpose of state is like memory element. A state stores some information in automate like ON-OFF fan switch.
A Deterministic-Finite-Automata(DFA) called finite automata because finite amount of memory present in the form of states. For any Regular Language(RL) a DFA is always possible.

Let's see what information stored in the DFA (refer my colorful figure).
(note: In my explanation any number means zero or more times and Λ is null symbol)

State-1: is START state and information stored in it is even number of a has been come. And ZERO b.
Regular Expression(RE) for this state is = (aa)*.

State-4: Odd number of a has been come. And ZERO b.
Regular Expression for this state is = (aa)*a. 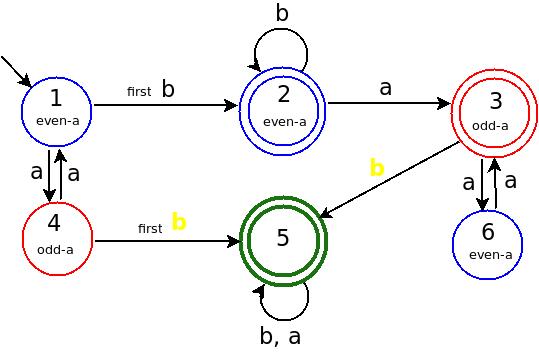 Figure: a BLUE states = EVEN number of a, and RED states = ODD number of a has been come.

NOTICE: Once first b has been come, move can't back to state-1 and state-4.

State-6: Just to differentiate whether odd a or even.

I forgot to explain how Yellow-b comes?
ANSWER: Yellow-b is a b after state-4 or state-3. And we can write like:

English Description is complex but this the only way to describe the language. You can improve it by first convert given DFA into minimized DFA then write RE and description.

Also, there is a Derivative Method to find RE from a given Transition Graph using Arden's Theorem. I have explained here how to write a regular expression for a DFA using Arden's theorem. The transition graph must first be converted into a standard form without the null-move and single start state. But I prefer to learn Theory of computation by analysis instead of using the Mathematical derivation approach.

I guess this question isn't relevant anymore :) and it's probably better to guide you through it then just stating the answer, but I think I got a basic expression that covers it (it's probably minimizable), so i'll just write it down for future searchers

The examples (1 - 4) that you give there are not the language accepted by the DFA. They are merely strings that belong to the language that the DFA accepts. Therefore, they all fall in the same language.

If you want to figure out the regular expression that defines that DFA, you will need to do something called k-path induction, and you can read up on it here.

Not the answer you're looking for? Browse other questions tagged grammar context-free-grammar finite-automata deterministic or ask your own question.

16
Finding the complement of a DFA?
8
Need Regular Expression for Finite Automata: Even number of 1s and Even number of 0s
3
Finiteness of Regular Language
4
Show that the following set over {a,b} is regular
2
What will be the DFA for the regular expression 0(0+1)*0+1(0+1)*1?
1
How to convert an NFA to the corresponding Regular Expression?
1
Cnnverting FSM to regular expression
0
How to solve δ(A,01) for this DFA?