How to show full stack trace on eclipse?

I'm using Eclipse to debug a Java application. Somewhere in the code I get an exception and the stack trace:

You have the entire stack.

This is only part of a stack trace. Directly before this was another piece. Look at the bottom lines of this one, and the top lines of the previous one. You'll see them match up. The stack trace began with a section that doesn't begin with "Caused by".

The "Caused by" exception is hiding parts of the stack trace that are verbatim copies of stack trace entries in its parent. In other words, Java doesn't show the entire stack up to main() for every cause - it just shows what you haven't seen already. See the Throwable.printStackTrace() documentation.

The "Caused by" is filled when you provide a cause when creating a Throwable. Look at the constructors for it. This is done when a piece of code catches a low-level exception and then wants to rethrow it as a different exception class.

the answers above are not accurate, every time the stack show the words "caused by" it means that the exception went through one or multiple methods until it was caught, and then thrown again. This could happen many many many times, the stack trace is not a loop, it is a single direction, so no, the stuff at the top does not relate to the stuff at the bottom, the most important part IS at the bottom, that is the root of the exception, so if you would have:

then you would not want to focus so much on the FileNotFoundException, but you would want to focus more on the NullPointerException. Like say you had a properties file with a file name in it. If accidentally used mykey, to find the property "myKey", then the propertiesResource would return a null, that would then get thrown all the way through all the lines of code (hopefully) to your application where the last catch block is. . . wich, at this piont, it would be "wrapped" not as a nullException, but as a FileNotFoundException. . . 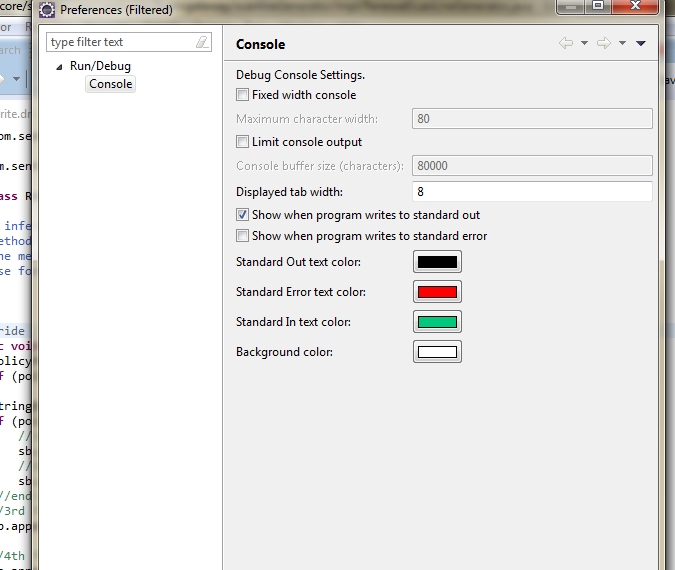 We might be diverging from the actual problem he's facing. I was having similar problem and it turns out I had my Limit console out put box check marked. After I removed it I was able to see the full stack trace. Steps: Right click on console || ctrl + click if mac go to preferences and follow the above instructions

I think it means that the Exception was caught and packaged into another 11 times before printStackTrace was called.

Try and figure out the output of the following program for better understanding:

As Ed says, it is showing the entire stack, but leaving out information that you've already seen. See Throwable#printStackTrace()

Note the presence of lines containing the characters "...". These lines indicate that the remainder of the stack trace for this exception matches the indicated number of frames from the bottom of the stack trace of the exception that was caused by this exception (the "enclosing" exception). This shorthand can greatly reduce the length of the output in the common case where a wrapped exception is thrown from same method as the "causative exception" is caught

Often an exception is wrapped; created with another exception as the cause:

In this case, displaying the stacktrace will create the ... 11 more that you see.

I have never seen that, but try this

There is a vmargs option

1
How do I show the rest of the errors in LogCat
1
Can't see all the stack trace for failure trace in Eclipse
1
Using a Java enum in a Spring MVC app?
0
Android, an error about keydown, keyup event of a custom button

3410
How do I efficiently iterate over each entry in a Java Map?
4181
How do I read / convert an InputStream into a String in Java?
1279
How can you speed up Eclipse?
3597
How do I generate random integers within a specific range in Java?
743
How can I show line numbers in Eclipse?
1015
How can I get the current stack trace in Java?
1536
How can I convert a stack trace to a string?
1263
'Must Override a Superclass Method' Errors after importing a project into Eclipse
1915
“Debug certificate expired” error in Eclipse Android plugins
3312
How to create a memory leak in Java?